Effie Florence Anderson was born August 22, 1888 in Ironwood, Michigan U.S.A. Her parents, Tilda M. Sederberg and Nels Theodore Anderson, were both born in Sweden. Matilda had emigrated to the U.S. with her parents when she was seven years old. Nels left Sweden at the age of 18 to seek his fortune in America. They married in 1887.

Nels worked at various jobs — logging, construction, mining, farming, and had spent some time in Canada prior to his marriage in 1887. While farming at North Branch, reports of rich farm land in Canada were received. This led to the decision to sell the North Branch farm and buy a farm in Saskatchewan.

Miss Anderson died in Saskatoon in 1981 and is buried at Donavon.

The following account appears to have been written for publication, but details are unknown. It was written prior to the closure of the Donavon school and Miss Anderson’s move to Saskatoon in the early 1970s.

Early History Of Schools In The Donavon Area

In 1903, settlers began to arrive in the area now known as Donavon. By 1905, it was evident that there were enough children for a school, so a school district was formed and a school built and named Norquay School, located one and a half miles east and one mile south of the present hamlet of Donavon. This was prior to the coming of the railroad and locating of a townsite, and the nearest town was Delisle. A year later, the Maynard School was built about four miles to the northwest of what is now Donavon. For most of the settlers there, the nearest town was Laura. 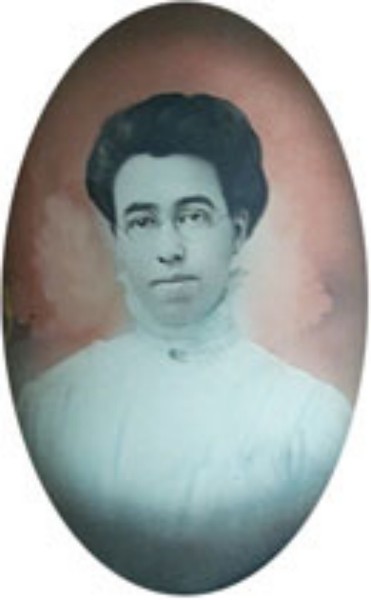 A post office had been located at the farm home of Mr. and Mrs. W. D. Pattison, one mile east of Norquay School, and named Birdview P.O. in honour of Mrs. Pattison, who was called “Birdie”, and who became the first postmistress.

In 1911, the Canadian Northern built a branch line from Delisle extending south and west, and a townsite was laid out nine miles south of Delisle on the property of Mr. W. E. Bell, a pioneer farmer in this area. It was given the name of Birdview from the name of the post office in the vicinity. On the arrival of Mr. T. E. Hahn from Ontario in 1912, who built a store with space for a post office, it was moved into the hamlet and Mr. Hahn became the postmaster.

The name of Birdview was changed later, as some mail was sent by mistake to a better-known place, “Broadview”, so a request was made for a change. Several names had been submitted, and that submitted by Mr. Hahn of the names of two rivers, Don and Avon, at Stratford, Ontario where he had attended business college, was chosen, but combined into the one name of Donavon.

In 1912, several new schools were built near Birdview to accommodate the children of new settlers more recently arrived. One of these was Grand Central, located five miles southwest of Birdview and the same distance northwest of Swanson. The other new school was Frontenac, about five miles to the northeast of Birdview.

As I became the first teacher of Grand Central School, I will here relate some of the early experiences. 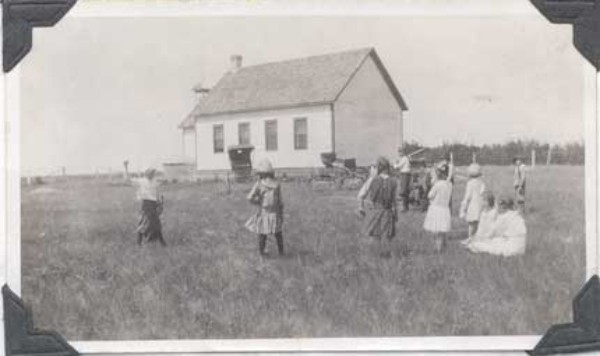 I had arrived with my parents from the state of Minnesota, and had trained as a teacher at St. Cloud, Minnesota Normal School, and had had some experience in teaching. On learning this, I was approached by the Board of Trustees of Grand Central S.D. to take over duties as teacher of their new school. The salary would be $60.00 per month on a yearly basis on twelve months, or $720.00 per year, and to this I agreed.

I found some things strange and different from that to what I was accustomed and I felt that it would take some time to adjust to new conditions. My first pupils were in Grades I to VI, with the youngest five years of age, the age at which children could attend school. Many came at this age in order to obtain the government grant for the required attendance. It was fortunate I did not have Grade VII or VIII at that time, for I did not know the history to be taught to them, and it took me some time to acquire the knowledge of that subject to enable me to teach it.

I had come into a school that had not yet procured all the necessary equipment or books required, and the trustees were not able to help much. I sent word immediately to the Department of Education to advise me as soon as possible as to our immediate needs and in three weeks, an inspector arrived and gave me some helpful information. 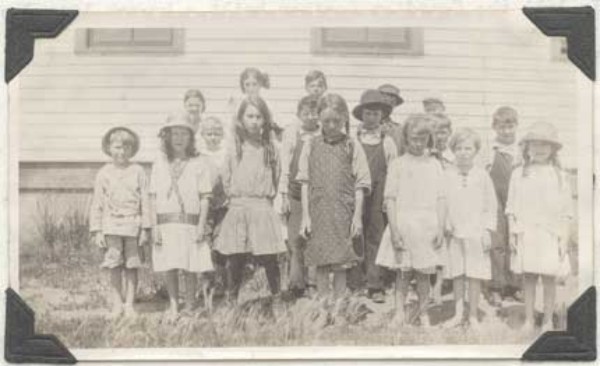 One of our handicaps was lack of blackboard space, as all we had was a small board put up on the side wall near the front. An order had been sent for the boards, but on bringing them to the school in a lumber wagon, a sudden wind storm had come up and blown them off the wagon and broken them, so only a small piece could be used. A new order was made, and on reaching Swanson, they had been thrown off unto the platform there, and since there was no station agent, they also had suffered casualty. Meanwhile, I was in a predicament trying to teach without equipment and Canadian books for the younger pupils who had not yet come supplied with any.

However, in time everything was in order and we were making some progress. The pupils were happy and eager to learn, as they were proud to have a school close enough to attend. Those near by walked to school, others drove or were brought by their parents. At every school, it was necessary to have a school barn. During the nice weather, I also drove a horse with top buggy, from my home, five miles distant, and picked up some children along my route. In the winter, I boarded near the school, going home for weekends only.

At the time I started teaching here, the school year was 210 days, which included two days for attending a Teachers’ Convention, though four days were allowed for traveling, if necessary. Many of the rural schools were closed in January and part of February, making it necessary to keep them open part of the summer instead. Schools with more older pupils did open shortly after the new year and remained closed for the usual six weeks during the summer.

The schools became community centers for many years when families gathered for meetings of many kinds – church services, concerts, plays, debating societies, Christmas celebrations, etc., and dances were always a popular pastime.

In my first year at Grand Central School, I was approached by the Board, when the harvest had been completed, with a suggestion that I have the pupils put on a short concert, to be followed by a box social and a dance for the adults of the community, to raise money for some extra supplies which could prove useful. This was done the latter part of November, and proved to be a great success. The children delighted their parents and friends with their performances.

From the box social, about $175.00 was taken in, and music was supplied free gratis for the dance. From the funds, we purchased an organ for $125.00, some hanging lamps, and had enough left for treats for the children at Christmas. Then another concert was put on and a tree decorated, and children and parents had an enjoyable old time Christmas concert and celebration.

In the early twenties, school fairs became popular with schools in various centers, competing for honours in different kinds of school work, with addition of things done in the home, such as baking, handicrafts, and even growing vegetables.

The day chosen for the display might begin with a school parade to the place where articles were on display, and where judges had been chosen to label the various entries as to their merit for which points had been given, and some trophy would be awarded to pupils and school with most points. Sometimes there would be a competition of schools in group singing, public speaking, physical exercises, etc. All this involved a great deal of work for teachers and pupils, and after a few years was discontinued, for it was realized that the benefits were not equal to the losses in time spent on the projects and detracting from the regular school work. 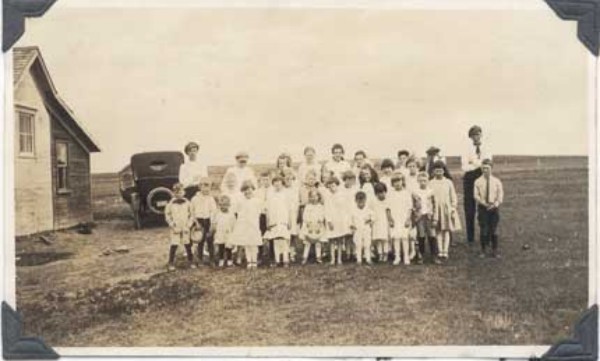 As children in the rural schools finished the elementary course, there were no schools near by where they could continue their education. A few living not so far from Delisle enrolled in the high school there. Some could drive the distance in the good weather, but for several months of the winter, they might board in Delisle or their parents could move into the town to give them the opportunity to attend school. A few were able to go to Saskatoon to enroll in a Collegiate and then Normal School, a Business College, or enter a Hospital for nurses’ training.

But for most, there was no hope for higher education. As they school enrollment increased in the Norquay School, there came the time to press for a school to be located in the hamlet of Donavon, with two rooms, one for high school, and one for the elementary grades. This school would take the place of Norquay School, and it would be necessary to include some land from each of the districts adjoining it. This caused considerable contention from parents not having children yet ready for high school and others who would be a considerable distance from the school, who previously were close by. Others looking to the future realized the many advantages they would have, and finally won out with the result that a two-room school was constructed in Donavon, and in the fall of 1931, it was opened and in operation with two teachers in charge: Earl Simmons as principal in the senior room and Dorothy Milburn in the junior room. For the first time, children living in the hamlet did not require transportation to a rural school, and those pupils ready for high school could attend and live at home until ready for University or other place of higher education. The name of the school district remained Norquay for several years, but later was changed to Donavon. 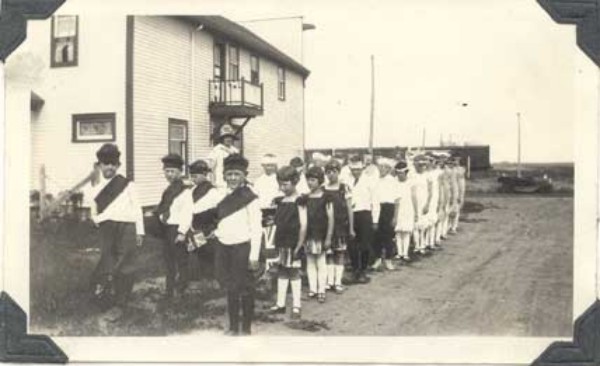 From Donavon School have gone many students who have made a success of their life work from the start that was provided for them here. Among them have been teachers, nurses, ministers, stenographers, dietitians, police officers, business managers, etc., etc. A number of the young men took an active part in World War II in which Canada was engaged, and won distinction in services for their country.

As new trends in education were established, it was found that the rural schools and one-room high schools could not provide the pupils with the requirements for education for the new era that was being ushered in. To promote advantages for better and more advanced education, the larger unit of administration was brought into power, with the building of composite schools in the larger centers. This has resulted in the closing of the rural schools around Donavon and conveying students from Grades VII to XII to the Composite School at Delisle. At present, Donavon School has its two rooms in operation for pupils from Grades I to VI inclusive, which we hope will be continued for some time yet, as pupils see to be lost to the community, as soon as they leave to get their education elsewhere.