When the new building for the Saskatoon Branch of the Western Development Museum was opened at 2610 Lorne Avenue in 1972, manager Gordon Wilson asked a group of senior citizens who had worked at the previous site on 11th Street to organize an association of volunteers to advise and assist in developing a living history of Saskatchewan.

A more formal set of objectives was soon adopted. This new organization was to promote, develop, operate and maintain volunteers for the WDM for the recreation, education, and historic interest of all the residents of, and visitors to, the city of Saskatoon and area. It was further to perform all matters and acts as deemed necessary to the attainment of the foregoing objectives, including payment of honorariums to employees, and expenses to members as set by the membership. 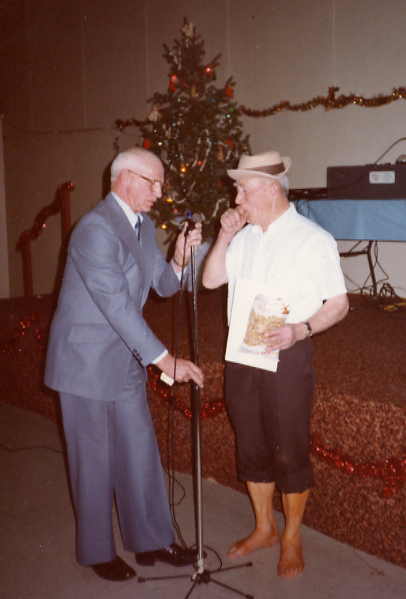 At about this time, the Department of National Health and Welfare announced a New Horizons Grants program to promote the well-being of senior citizens. These grants played a big part in the activities of the Boomtown VolunteerAssociation.

At a meeting held February 7,1973 a board of directors was appointed as follows:

One of the first activities was to conduct school tours of the museum. Tour guides helped identify the artifacts on display. The guides dressed in authentic pioneer costumes: the men with vest, suspenders and arm bands, the ladies with long dresses and aprons. What a difference this made! Now Boomtown looked more authentic.

Over the years, the following people have served as president:

The first regular meeting of the Boomtown New Horizons Association took place May 1,1973 with Charlie McCoy as president and Charlie Blake as secretary-treasurer. September saw the arrival of one-half of the grant requested. A bank account was opened in the west side branch of the Bank of Montreal. In October, David Loewen was hired as administrative secretary. This salaried position continued until December 1977. New Horizon grants as well financial support from the Government of Saskatchewan and the City of Saskatoon assured the continuity of this organization.

Tours of the Museum gained in popularity. As the years progressed, the tours, with Boomtown volunteers as guides, became more frequent for schoolchildren as well as foreign students and tourists. Guests to the many conventions accommodated in Saskatchewan Hall were invited to tour the museum as well. Some of the events that became annual affairs are the PionEra show, Folkfest, hobby shows, flea markets, art shows, as well as a doll show . At Christmastime a program called the Festival of Trees runs for a week. Again the volunteers act as guides and interpreters.

For many years Boomtown volunteers have taken on security and general interpreting duties every Sunday afternoon. 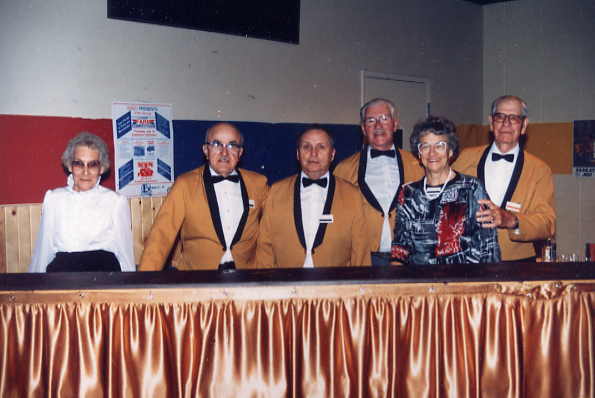 The bar, operated by volunteers, was a major fund raiser for the museum. In the late eighties or early nineties the museum staff took over the operation of the bar. Since this source of income now became available directly to the Museum, the Boomtown Volunteers Association is no longer involved in purchasing equipment for the Museum. Fundraising for the Boomtown Volunteers Association is now limited to membership fees, flea markets and the occasional raffle.

The list of artifacts that have been restored by the Boomtown Volunteers Association is extensive. It includes maintenance of equipment used in threshing demonstrations, complete restoration of a Model T Ford, Model A Ford, 1928 Chevrolet, and a 1927 Whippet. The workshop is equipped for wood working, machining, painting and repairing of chairs, tables, etc.

Other projects and improvements to the Museum done by the Boomtown Volunteers Association are the construction of round tables for the banquet area, wainscoting the walls, and construction of an elevator for staff use as well as for handicapped visitors to the Museum. A 40 outlet public address system was installed, the cafeteria was restored to original appearance, the education room equipped, and the Eaton’s Once Upon a Time Christmas display maintained. The livery barn with a team of horses inside was constructed as well an ox to pull a 1885 reaper. The blacksmith shop was provided with an indoor safety chimney and the photo studio was set up. 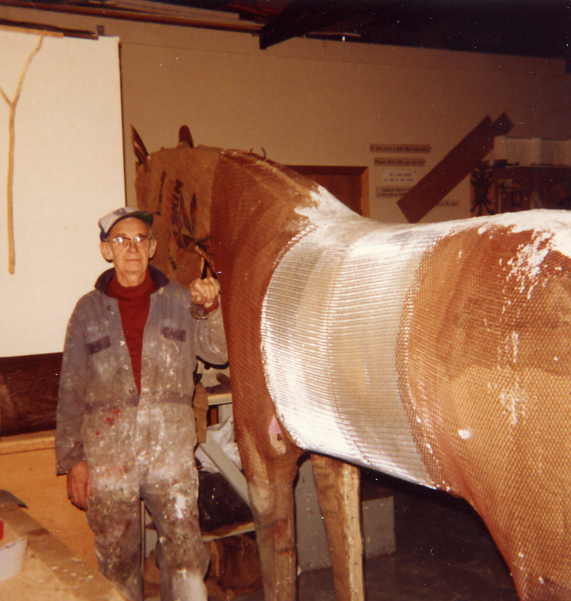 Thousands of dollars have been raised by the Boomtown Volunteers Association to pay for renovations, new projects and additions. Two large contributions were $5,000 towards a new boiler for a steam engine and $18,000 to upgrade the education room. Over the years contributions of various Boomtown Volunteers Association projects have exceeded $65,000.

During the years 1972-1988 the Western Development Museum, under the umbrella of the Saskatoon Exhibition, put on a week long summer show. Volunteers appeared in period costume on the street and in the buildings of Boomtown.

Boomtowners worked with the Threshermens’ Club in field events such as saw mill operations. They operated some of the old tractors and steam engines. The WDM and Saskatoon Exhibition combined show was named Pioneer Days. Later it was changed to Saskachimo. To begin Saskachimo week in 1981, the membership dressed in their pioneer outfits for a Sunday brunch held in the Bessborough Hotel gardens.

Boomtowners manned the Mini Bus and horse drawn vehicles, moving people between the Museum and the Exhibition grounds. They worked with the Women’s Auxiliary, preparing and serving meals, craft work and demonstrations such as butter and ice cream making. They helped in front of the Museum making popcorn, corn on the cob, pioneer tea, hamburgers and hot dogs.

In 1989 the union with the Exhibition came to an end. The Western Development Museum decided to put on its own two day event known as Harvest Fest. The name has since been changed to PionEra, the original name of the Museum summer time show. Many “old time” Boomtown members were happy with this change. Now they were again playing an integral part in this annual event.

From 1982 to 1990 the WDM was part of Folkfest, an annual three day celebration of Saskatoon’s multi cultural heritage. The Pioneer Pavilion was a tribute to the pioneers of Saskatchewan and their achievements. Weeks prior to Folkfest Boomtowners worked with the Women’s Auxiliary, baking the piles of home made bread, bannock and cakes to be served as the hearty pioneer fare. Some Boomtowners purchased and hauled cartons of liquor, soft drinks and ice and all that sort of “stuff”.

At the Pioneer Pavilion Boomtowners in period costume were in the stores and buildings on Boomtown Street. They assisted in the food service, helped slice the many loves of bread, manned the Mini Bus and horse drawn vehicles providing transportation between the Pioneer Pavilion and the other three pavilions on the Exhibition grounds.

In the evening they operated a very busy bar while a “hoe-down” orchestra provided dance music. The Pioneer Pavilion closed at midnight. In the wee hours of the morning the volunteers tidied up, washed glasses and ordered stock for the next day. A late night ended a very long day. It was a lot of hard work, but mixed in with the hard work were lots of comic events, laughs and camaraderie. Eventually it became just too big an undertaking for a group of senior volunteers.

Later the Museum participated in Folk Fest as a rental property for other pavilions. Those hard working volunteers could now attend as paying guests to enjoy the celebration.

Members of the Boomtown Volunteers Association, used to take bus tours to museums such as the Tyrrell museum in the Drumheller region and the Moose Jaw Western Development Museum. Other trips were to the Cory Potash mine, as well as a visit to Minot, North Dakota.

At the Saskatoon Western Development Museum we held fun nights, pot luck meals, work projects and old time demonstrations. Music at dances was provided by local bands or association members. The most common instruments were the fiddle, guitar, and banjo. At one time there was even a band of five harmonica players.

Fun evenings were held on Hallowe’en, at wind-up parties after threshing demonstrations, and on volunteer appreciation nights. One of the highlights of the St. Patrick’s day celebration was Charlie McCoy in his green hat and tie serving his version of Irish Coffee. Charlie took great pride in his Irish background. Before the museum had its liquor license, the club would obtain a permit to serve drinks for special occasions.

On games night Shuffle Board, Bean Bag Toss, Carpet Bowling, 21 or Bust and Darts were enjoyed by all. Prizes were awarded for the highest score and lowest scores.

In 1974 the club had its first float in the annual Travelers Day Parade. In 1983 a mini bus load of members dressed in pioneer outfits participated in the opening of the new 42nd street bridge. The Grade Three Christmas program begun in 1980 continues to this day. Several club members participated in the Colony Trek in 1982, driving covered wagons, buggies and riding horse back. Dalton Hannah drove a team of mules.

The assembly, preparation and mailing of the Curatorial Centre newsletter “Sparks off the Anvil” was started in 1977. Starting in 1981, a chicken plucking contest involving city council, local business people and the media was held two or three times.

Construction of the volunteer centre started March 10,1981. The official opening took place May 23,1982. The members built the two horses in the livery barn. The head of Prince, one of the horses, contains a time capsule with the names of the people who made the horse, a copy of the local daily Star Phoenix, and some coins and paper money. A group picture of all the members taken in May 1982 was placed in a time capsule located in the park just north of the Bessborough Hotel. This capsule is to be opened in 2082.

Every year members who have reached their eightieth birthday are recognized with a life time membership. Their names are placed on a plaque in the volunteer centre.

Monthly meetings are held in the volunteer centre where the business of the day is discussed. This is followed by entertainment and a lunch courtesy of the membership. The social life and activities of the Boomtown Volunteers continue to this day.

In 1976, the Boomtown Volunteers Association held its first two day School Harvesting Demonstration with a total attendance of 1,500 Grade Four pupils. This was so successful that the School and Museum Boards suggested it be continued and expanded to a four day program. Later it was decided to move the time from spring to fall to better accommodate the academic year.

At first mostly Saskatoon and area schools attended. Soon schools from all over the province came to the event.

Since the Grade Four Threshing Demonstration requires a lot of manpower to operate, the Boomtown Volunteers Association has been joined by the Pioneer Threshermen’s Club, the Pleasure Drivers’ Club and the Women’s Auxiliary. 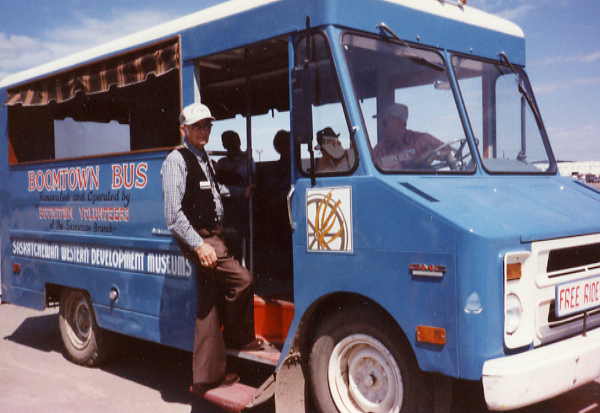 Weather has always been an important factor. The show has rarely been canceled, but has had to be postponed due to inclement weather. Weather has ranged from nice and sunny to cold and windy, as well as rain and snow.

Seating was always a challenge. The donation of the bleachers used for the opening and closing ceremonies of the Canada Summer Games solved the problem until 2002, when they had deteriorated to the extent that they were no longer safe. In 2003 the bleachers were repaired and replaced as needed.

The format of the program has undergone very little change from the original. Included in the program are:

Today an average of 3,500 Grade Four pupils enjoy these annual demonstrations. The favorite part of the entire demonstration seems to be the horses. This show will most surely carry on well into the future. 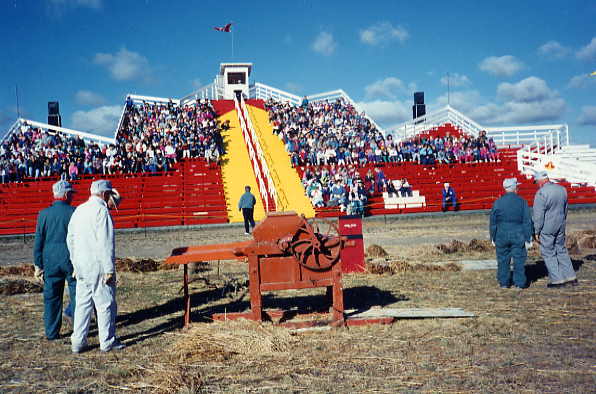 Members of the Boomtown Volunteers Association from its beginning; year indicates when the person joined the organization.