In 1907, James Corydon (Cory/Cora) and Lizzie (Sheets) Callaway, with their son James (Jimmy) Edward, left the Green Oak community near Rochester, Indiana, to homestead in Saskatchewan.

Their daughter, Loral Pearl, remained in Indiana. There they had had a small mixed farm, raising hogs and growing tomatoes and cucumbers for sale. Hearing through newspaper ads and relatives who had worked in North Dakota that free land was available in Canada – Indiana land prices were rising — they decided to try their luck in this new country. In doing so, they carried on a tradition of pioneering established by ancestors who had first come by sailing ship to the American colonies from England, Ireland and Scotland in the 1600s. As new territories opened up, successive generations had moved from New Jersey, Ohio, Delaware, and (West) Virginia with Cory’s grandparents, Charles and Ella Garten Callaway, arriving in Indiana in 1827. 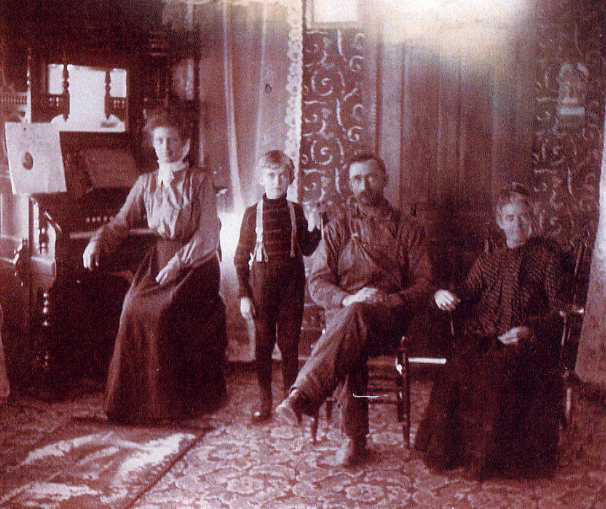 Cora and Lizzie homesteaded on NW31-28-27 W2, which was approximately 17 miles northeast of Davidson.

No anecdotes about those early years of homesteading have survived through to the present generation. The Callaways accepted the consequences and the benefits of the choices they had made and, like many other pioneers, sustained themselves by working hard and living ordinary lives.

The life of a pioneer wife must have been a hard one but, in what little spare time she had. Lizzie made many beautiful hand-stitched quilts, some of which still remain. Her granddaughter, Dorothy Callaway Hillestad, continues this tradition, creating prize-winning quilts using both traditional and modern patterns and techniques.

Cory Callaway was an easygoing man with a good sense of humor — and, maybe a little absent-minded. He smoked a pipe and often bought bales of leaf tobacco which he used in his pipe. He carried his tobacco in his pocket and one time he was apparently also carrying some .22 shells in the same pocket. You can imagine what happened when he loaded, along with the tobacco, a .22 shell in his pipe! Fortunately, neither he nor anyone else was injured. 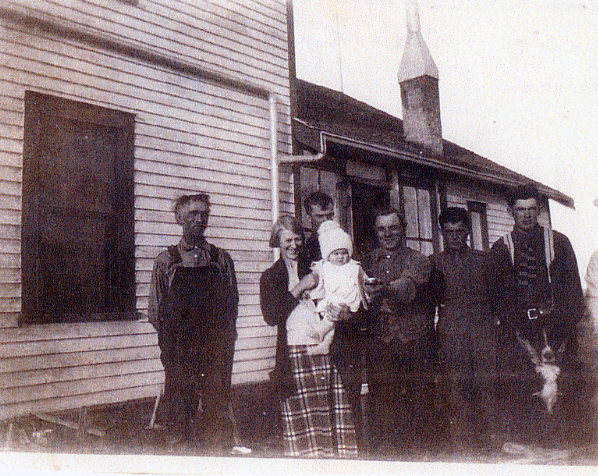 The Callaways were successful farmers, and realized their hopes of a better life – over the years several quarter sections were added to the original homestead. During Cory’s lifetime all farming was done with horses. His health began to fail in the mid-1930s and he passed away in July 1937 at the age of 76. Lizzie passed away in April 1943, also at the age of 76. They are buried in the Davidson cemetery.

In the early 1920s Jimmy began corresponding with Bertha Edith Vandegrift. The Vandegrifts and Callaways had been neighbours back in Indiana, and Jimmy had seen Bertha on a trip back to Rochester in 1916. He returned to Indiana in 1924 and they were married in Rochester on February 12 of that year. He brought his bride to his parent’s farm in the Maple Valley district. A few years later, they purchased the Glosslee farm, which was near the original homestead, and they made their home there for a number of years.

Bertha Vandegrift could also trace her American heritage back to the mid-1600s, when the earliest Dutch immigrants established New Amsterdam – now known as New York.

The senior Callaways, Jimmy, Bertha and their growing family experienced the hard times of the ’30s. In 1937 the crop was so poor that the grain bundles to be harvested were brought into the farmyard and put through the threshing machine. Food was shipped in from Eastern Canada, barrels of apples and dried salted codfish (remembered as not being particularly tasty). These food items were handed out to needy families by the municipality. Christmas gifts were often homemade items as there was no money to buy gifts. The Callaways were more fortunate than many as they always had food on the table, raising their own livestock and garden produce (not too plentiful some years). A load of wheat could be taken to the Humboldt flour mill and exchanged for flour. Wool – both sheep fleece and old woolen cloth – could be sent to a woolen mill and, for a few dollars, new woolen blankets were received in return.

Jimmy Callaway was involved in their community: he served as councillor for Wood Creek municipality for several years in the 30s, and was a member of United Grain Growers and the Saskatchewan Wheat Pool. 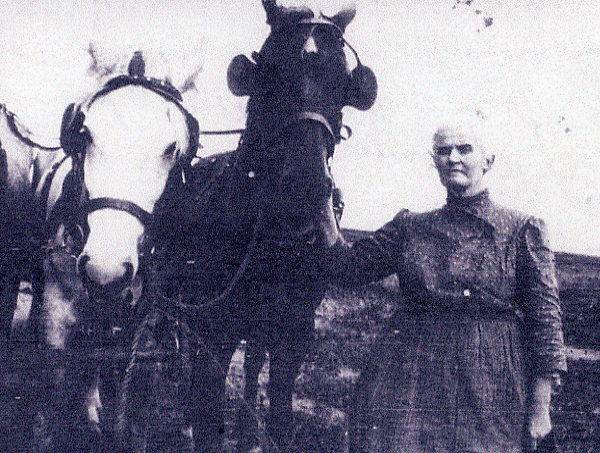 In addition to always growing a large garden. Bertha raised large flocks of poultry; all of which provided well during some very hard times on the farm in the ’30s. She also baked the most delicious soft gingerbread cookies you ever tasted.

In 1963, Bertha and Jimmy retired and moved into Davidson. Their original farmhouse on the Gloslee farm was moved into town and renovated. Bertha passed away in April 1973, and Jimmy in March of 1974.

Dorothy is the eldest child of Bertha Edith Vandegrift and James Callaway, bom December 19, 1925, in Davidson. She received her education at the Maple Valley and Davidson schools. Upon moving Regina, she took a business course and worked until she met and married Harold Krist Hillestad in 1945. Harold joined the army shortly after, and they were subsequently posted to Maple Creek and Calgary.

In 1954, they decided to take up farming and relocated to the old Worrall place in the Maple Valley district and resided there for six years. Dorothy and Harold made many moves and many career changes throughout their working lives: seismic crew, grain buyer, farmers, public servants, accounting, motel owners and operators, video store owners. In 2004, they are retired and living in Regina.

In retirement, they are still on the move: keeping up with family activities in Calgary, and Saskatoon.

Colorado and, for pleasure, traveling throughout North America, to Europe and their favourit destination, Hawaii. 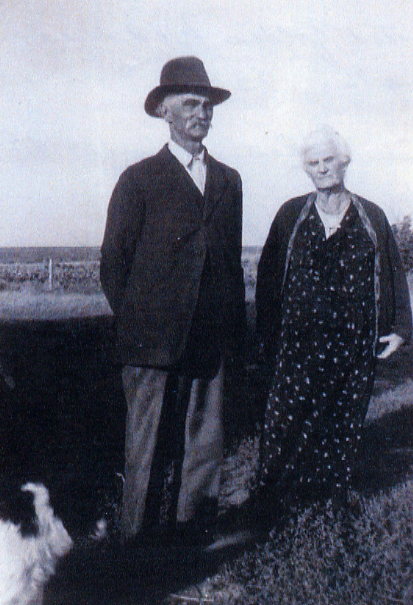 Richard Harold and his wife Shellbee Burkhart are residents of Saskatoon.

The second child, Myra and her husband James (Jimmy) McFie reside in Saskatoon. Jimmy is now retired from Robin Hood Mills. They have four children: Cheryl; Pam (husband Darryl Richardson and their children Tara and Drew), Rian (with his wife Judy and three children Graham, Braden and Alexander); Craig and his partner, Tina are parents to Blaine and Carson. All live in Saskatoon, with the exception of Craig who has returned to the land of his paternal ancestors and lives in Milport, Scotland.

Norman Franklin Callaway, the eldest son of Jimmy and Bertha Callaway was bom July 31, 1933, at Simpson. Before beginning farming with his dad in 1951, he attended Maple Valley school and also the School of Agriculture at the U of S.

He has been a member of the Oddfellows, was a charter member of the Kinsmen and K40s, served as a volunteer firefighter, and was involved with Cubs and Scouts. In 1974, Norman earned his wings as a private pilot, as did his sons Allan, Duane and Michael.

On November 30, 1957, he married Velma Palmer, elder daughter of Harry and Annie Palmer of Davidson. At the outset, they farmed while residing in the town ofDavidson but have been on the farm full-time since 1978. In 1980, they received the Family Farm Heritage Award for being the third generation of Callaways to continuously operate the family farm. 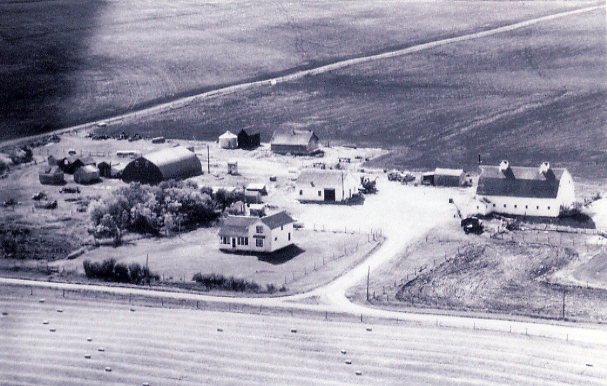 Norman and Velma have four children.

Allan Norman is married to Dalelene Sullivan (children Joshua, Matthew and MacKenzie) and lives on an acreage at Clavet. He studied heavy duty mechanics which has been useful while he worked as a semi owner-operator.

Duane Charles, Airdrie AB, is married to Cindy and they have a daughter Chantelle. Duane turned his youthful interest in flying into a career in aviation..

Michael James has been involved in farming and frequently spends (our) winter months in Australia, living and working on a farm there.

Bud Callaway is married to Debbie Cawsey. After farming for many years in the Maple Valley district, they now have an acreage near Saskatoon. They have one daughter, Tanya, who works in Saskatoon.

Although generations of Callaways have made their living as farmers, Norman and Velma may be the last generation of this branch of the Callaway tree, to operate the Callaway farm.

The descendants of James and Lizzie have adapted to the changing times and most now are urban dwellers.

We look for new opportunities and go where those opportunities take us – across Canada, to Scotland and Australia and some have returned to the States. The opportunities now are linked to educational and employment opportunities and we see our siblings and cousins attending trade school and university. We work in business, the military, real estate, aviation, finance, information technology, public service, hospitality industry, health care, trucking, mechanics. We’re still moving on but appreciate where we came from.