My grandfather Orlin Smith Elliott was born in Ontario and came west as a young man to homestead in the Wawanesa area of Manitoba. There he married and had a family of five, three boys and two girls.

In 1902 he moved to the Saskatoon District and took another homestead at Clavet, then called French. He moved to the farm in the spring of 1903, so my roots are deep in good old Saskatchewan.

My dad, Burton Elliott, at the age of 22 years wanted adventure. In the fall of 1915 he came north to take a homestead. On October 9th he got the S-E-6-53-24-W2 at Paddockwood, Saskatchewan.

My mother had come with her family, the Charlie Keceys, in 1914 when Paddockwood was just starting. 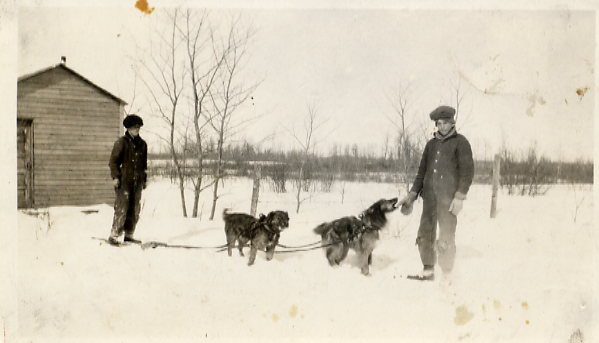 Mom and Dad married on Christmas Day 1920. Home was a little two room shack beside the old Indian trail. There were no roads at that time. Travel was by horse or oxen and a lot of dog teams in the winter.

I cannot remember the dog team, but I am the little guy on the sleigh. I do remember playing with the old brown dog when I was three or four years old.

I guess I was born to be a driver. My first team of horses was Dad’s boots tied to a box or the dust pan, or a little home-made wagon that mom had made. When I started school I tried to drive my dog.

As I got bigger I had two then three dogs. Then I could really go. By now there were four of us going to school and we drove a horse in the winter.

I liked to help Dad all the time and he helped me. I got my start, a small one year old calf, so I had my own ox. I was twelve years old and could do anything, so I built a cart. I was one happy kid. 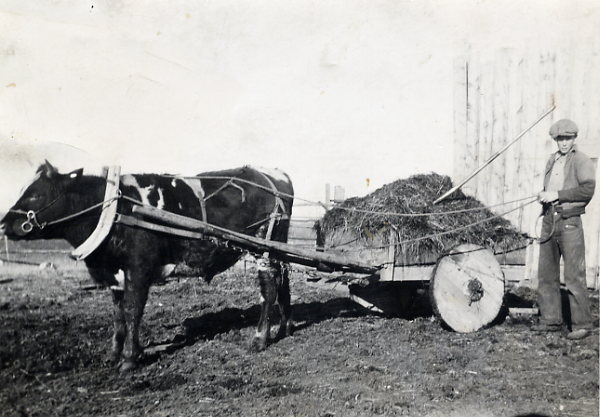 The next year I had a better steer to drive and in the fall of 1937 I sold my ox for $17.70 and bought my first horse for $2200, an old Bronco mare not broken. I was lucky the next spring I got a real nice filly foal. Then I was on my way. By this time I was able to do all the field work with three or four horses.

The year I was sixteen years old and finished my Grade 8, Dad was very sick and I had to take over most everything on the farm. That was the end of my schooling.

After harvest and fall work was over, Dad was feeling better and was going to work in a bush camp. I went to work as a skidder with one horse. My job was to pull eight foot logs out of the bush to the road, where they could be loaded and taken to the mill and cut into railway ties. 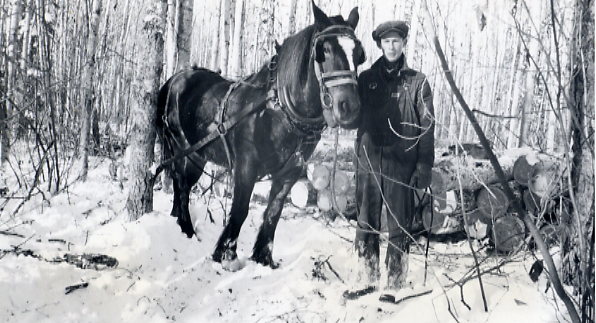 Charlie in the Bush

From November to April my winter income was $126.00. I had a very good winter. The next few years were much the same, helping on the farm in summer and working in the bush in the winter.

I got my discharge in March 1946. By this time my brothers were going out on their own, so I bought the home place from Dad and Mum, through the V.L.A. The big job then was to clear the land. A lot of it had been done with ox and a team of horses. Then everything was with horses until I got a J.D. tractor.

I spent one year as a bachelor then in 1950 on March 4th Betty Dearing and I were married. Then things were a little better. We had some cows to milk and cream to ship. This helped to keep food on the table. Mother Nature was good to us and we had our first son January 20th 1951, William Charles. This went on until we had five boys and finally two very nice girls.

When Betty and I got married we had five cows to milk so that put food on the table.

But trouble hit us and we had to sell everything on account of tuberculosis. Everything had to be cleaned up, then wait for two years and then start over. There were two more winters of working in the bush, this time with power poles. Then we bought six purebred Ayrshire. For the next twelve years we did real good, shipping two or three cans of cream a week, but never a day off.

Then we added Aberdeen Angus to the farm; this was a good move and things went well. The boys were all able and willing to help. They all had saddle horses and were in 4H.

By this time my bush horses were all gone and I had purebred Belgians and started to show them at fairs. First there were two then four. Forty-five years after I sold my ox I had my own six horse hitch. We went to many fairs and parades always winning our share. 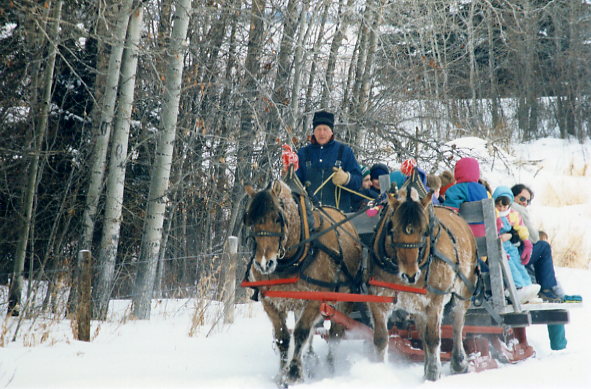 As well I took my horses to the WDM in Saskatoon to work the Pion-Era show, the Grade 4 School Threshing show 53 times. Now I go and help a little where I can. All this led to a change in my life. In 1980 the WDM was thinking of a covered wagon trip from Moose Jaw to Saskatoon. When I heard of it, I said, “Oh boy, I am coming.”

Carole Wakabayashi and Diana Matthews, plus many others worked on the plans. This went on for two years. This was something I had wanted to do all my life, to follow in my Grandpa’s and my Dad’s footsteps.

On June 21st 1982 The Colony Trek made up of 36 wagons, 156 horses and 205 people left Moose Jaw. Eleven days later we hit Saskatoon. I had two wagons, one for the WDM and one for ourselves.

In 1965 the year we went into beef cattle and we also built a new house. We had a loan with the V.L.A. and did all the work ourselves with the help of Dad. It was that summer our last little girl, Ellen, was born on May 11th.

About that time they were looking for a spare school bus driver. I said I would try it. Twenty-five years later I retired at age 68 1/2 years. Betty had been working part-time as a C.N.A for a few years.

In 1988 we sold the farm to the boys and moved to an acreage just four miles away. Now I had more time to go on many wagon treks.

Colony Trek was the big one, then the Barr Colony Trek from Saskatoon to Lloydminster in 1993, and again 2003 for the 100th year. On all of the treks, I always had someone else along, as outriders. So we made a lot of friends to share the fun and work. 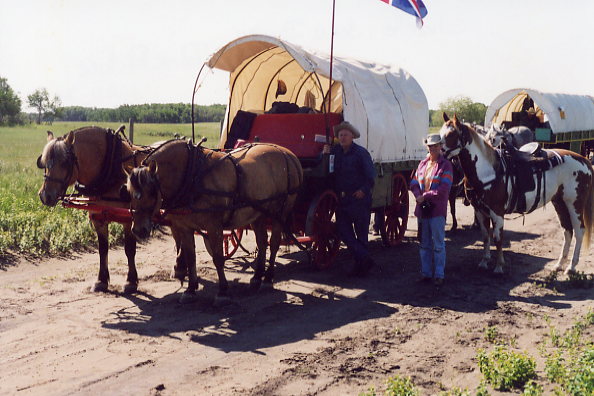 Betty passed away in February 2003, so it was sad at times when she wasn’t on the seat beside me.

I was always one of the older guys and with my years of working with horses I feel lucky that I had this opportunity to reenact what those great people of 100 years age went through to make Canada what it is today.

To all the people I worked with, making plans and traveled with and the ones we met along the way I can only say a big “Thank You”. I only wish I could do it all over again. But old age tells me, it is time to slow down.