The Gallaway farm is located four miles northwest of Estevan on Highway 39, a family farm that has been the home of four generations of Gallaways. The Gallaways trace their ancestry back to Gray Gallaway, a native son of the Emerald Isle, who emigrated to Canada when Toronto was known as “Muddy York.” The Gallaways established themselves as agriculturists, with succeeding generations following in the footsteps of their fathers. In 1891 John T. Gallaway decided to cast his lot on the western prairies. At that time many people in the east considered this a foolhardy undertaking. Nothing daunted, John Gallaway made his first trip west in 1892. He returned to wind up his affairs and move his family west that same year. Gordon Gallaway, at that time a lad of seven, recalled the trip and the thrill of crossing the river at Oxbow. Their first homestead was five miles north of Alameda, their first home a sod house with dirt floors.

When the railway was completed to Estevan in 1893, Johm Gallaway decided to move his family there and settled on the edge of that community. He purchased a dairy herd of fifteen cows and sold cream to Moose Jaw. The Gallaways were the proud possessors of the first cream separator brought to the district, an English table model made by Lister. The price was $35. John Gallaway filed on a second homestead in 1910, which is now a part of the Gallaway farm. He died eleven years later in 1921. The farm was carried on by his son Gordon, who built a new home in 1916 and added considerable acreage to the original homestead. 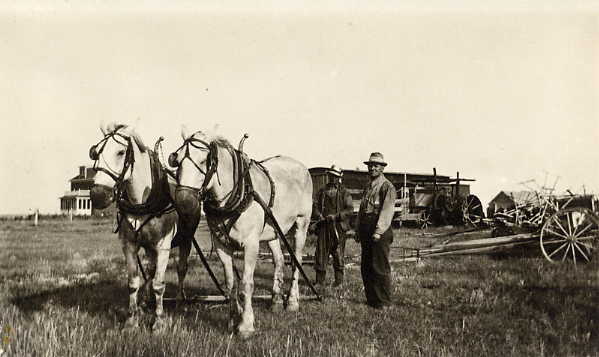 Gord and “Bill” in the machine yard
Year: c. 1905
Place Name: Estevan
The nigh horse is Major. The other is a new one.

Until his marriage, Gordon Gallaway’s sister Elsie lived with him and managed the home. She later married T.A. Torgeson, founder of Prairie Nurseries, Estevan. Gordon Gallaway married Fannie Louise Clendenan of Arcola in 1920. The Gallaways had two children, Ronald and Marjorie. Marjorie, a fine arts graduate of Mount Allison University, married Clarence B. Christie and moved to Brighton, Ontario. Ronald graduated from the School of Agriculture at the University of Saskatchewan. In 1951 he married Marguerite Cameron, from Birsay, Saskatchewan, a teacher at the Estevan Collegiate.

A good grade Shorthorn herd had always been maintained at the Gallaway farm. In 1946 they became interested in purebred Herefords, making their first purchase from Alex Mitchell, of the Battle River Ranch, Lloydminster, Saskatchewan. Herefords continued on the farm until 1970 when the cattle operation was discontinued. 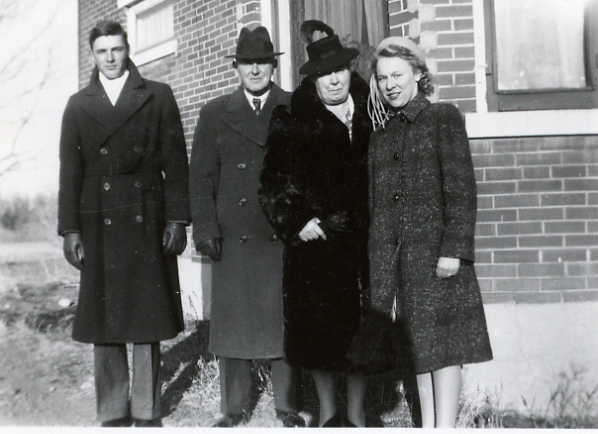 Gordon Gallaway served his town and district in many ways in such positions as Reeve of the R.M. of Estevan No. 5 for thirteen years. He was a founding Director of the Estevan Cooperative Association and an original signer of the Wheat Pool, Chairman of the United Growers in Estevan, secretary of the Hildahl Rural Telephone company, and active in his church.

Gordon Gallaway died in 1964, predeceased by his wife in 1961. Ronald Gallaway became the operator of the farm. 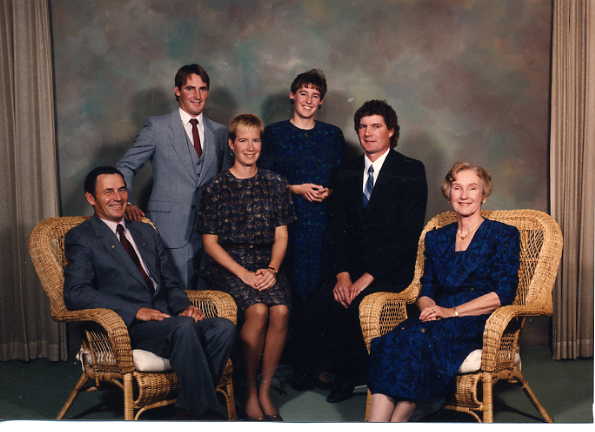 Ron has also served his community for twenty years on the School Board, in many positions in St. Paul’s United Church and the Rotary Club. He has served on the Board of the Estevan National Exhibition Centre and the Estevan Historical Society.

Marguerite Gallaway was employed for thirteen years as Executive Director of the Organization of Saskatchewan Arts Councils. She expanded the organization from seven to sixty two Arts Councils, established the Stars for Saskatchewan Concert Series and Koncerts for Kids throughout the province, and coordinated a visual arts touring program. The tours of performing artists included many famous names such as Maureen Forrester, Jon Vickers, The Canadian Brass, and Lois Marshall and the Festival Singers. 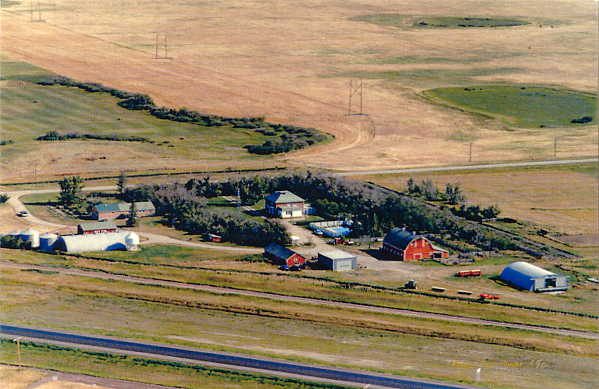 In retirement, Marguerite organized a Tourism Committee, manages the Souris Valley Theatre, a professional summer theatre, and spearheaded the establishment of the Souris Valley Museum and the Heritage Mining Display. For her work in tourism she received the President’s Lifetime Achievement Award. In 2002 she was appointed to the newly formed Regional Health Authority, now known as Sun Country Regional Health Authority. 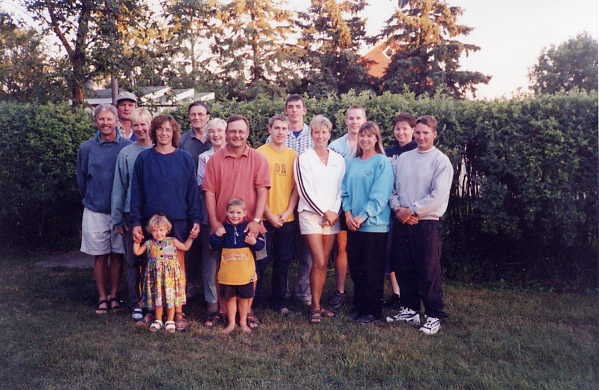 Family at 50th Anniversary
Year: 2001
Place Name: Estevan
Ron and Marguerite with their children and spouses and five grandchildren

Ron has retired from the farm and he and Marguerite now live in Estevan. He is still a Director on the Exhibition Board, an elder in the church, and a member of the Rotary Club. The farm is now operated by Donald and David who have added to the acreage. Many different crops are produced to meet the demands of today’s markets. The crop diversity, the immense equipment, and the computerized management reflect a farm operation that could never have been imagined by its founder, John T. Gallaway.