A Tribute To My Parents

At the end of this year I will look back and say that the ‘highlight’ was the day, July 16, spent at my hometown of Landis, when it celebrated the province’s centennial.

Landis is on the main line of the C.N.R., between Biggar and Unity.

I was somewhat reluctant to accept the invitation from my school chum, Florence and her daughter, Noreen, because I wondered “who will I know after an absence of 66 years?” It turned out to be fun day. 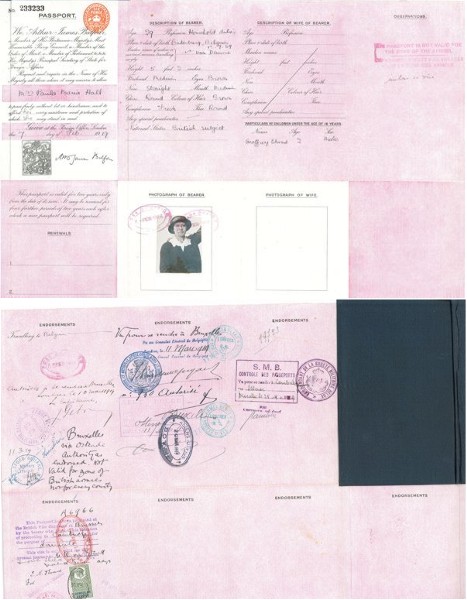 We arrived in time to see the parade at 10:00 a.m., then to the community hall to register as guests for the day. Our next stop was the museum where I came across a 1941 one-sheet telephone directory showing the names and telephone numbers of the rural folk. Of course, Florence and I wanted and received a photocopy.

In the afternoon we drove out in the country. I explained to Noreen that our farm was located six miles south and three miles west of Landis. To convert to kilometers meant that we missed the proper turn going west. However, we continued south until I didn’t recognize any of the surrounding area, we finally drove into a farm yard and asked for directions. I happened to notice the name “G & K Goetz” on their gate post and mentioned to Glenn that we had gone to school with Lena (sister) Goetz. “She was my mother” he replied. That enriched a friendship. Glenn instructed us to follow him in his truck and every so often he would stop and recall the names of our neighbors “who lived there.” He also mentioned that after all these years and regardless of the present owner, it is always the “Hall” farm. Why? Because my parents, in today’s jargon, would be known as “model gardeners.” 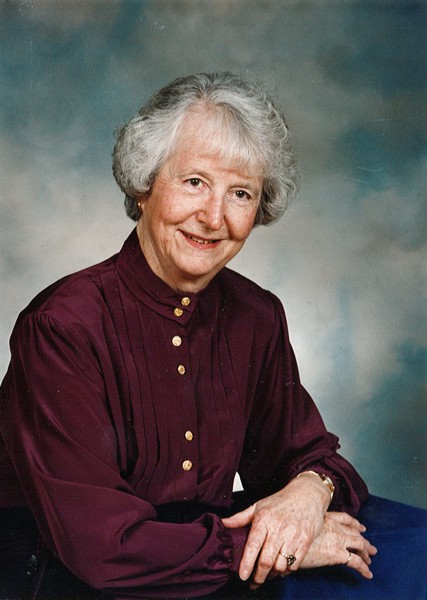 Gardening was a joint effort between my parents. Yes, we went through the thirties, but my best memory is of the productive years. Besides owning cattle, hogs, chickens and horses (our means of transportation and cultivating the land), the garden was Mother’s outdoor hobby. The vegetable plot alone would be the size of the area covering The Franklin (building located at 24th Street and 3rd Avenue, Saskatoon) – in length and depth. It was situated a short distance north of the farm home; to the west was the fruit orchard and a plot for the corn surrounded by trees – poplar, caragana, and willows – planted by my father. Every year he kept the caragana hedge neatly trimmed in the vegetable area. Across from the main drive way was a large potato patch.

A flower garden was closer to the house; while the vegetable garden on the south side was enclosed by a “chicken wire” fence to keep the chickens, cats, dogs, etcetera out. A portion of this fence was an ideal place for growing sweet peas and morning glory.

We three children were of age to help with harvesting of the fruit (strawberries, raspberries, black currants, red currants and gooseberries).

As youngsters, you might expect there was some grumbling on our part, “why did the fruit have to ripen all at once,” followed by two or three more pickings later. Not only that, we had to help sort the fruit, removing leaves, crushed and dried berries, in readiness for preserving, likewise with the peas and beans. I can still see myself asking my mother how many more pails of peas there were to be shelled. Picking up the potatoes in the fall was another task we dreaded. 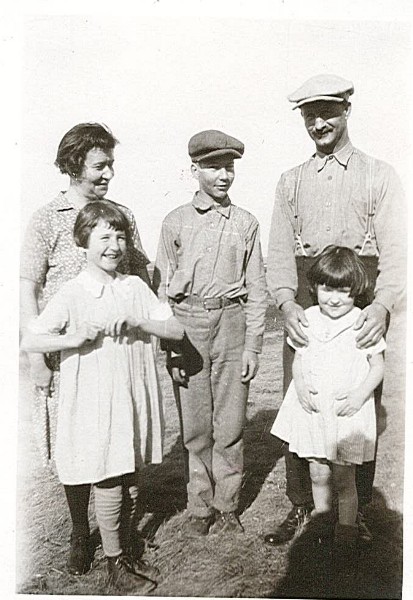 I should mention that when my mother was busy in the kitchen preserving the fruit and vegetables, my sister, Marjorie and I, with book or farm papers in hand would sneak behind a granary to read.

There was a friendly rivalry between my mother and Mr. Allaway, head gardener at the Scott Experimental Farm, as to who could grow the largest, solid-head cabbage and other vegetables. Perhaps through his advice, mother was able to grow the best varieties for our soil-type. We usually had more produce than we could use, so our neighbors and friends in Landis benefitted. 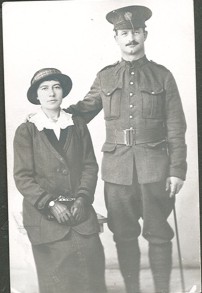 From the above it was obvious that we spent our summer holidays at home. No wonder we looked forward to returning to school!

In 1943 my father joined the Veterans’ Guard of Canada and in the fall of that year, my mother and Marjorie moved to Saskatoon. After a few months of ill health my mother passed away, April 28, 1944, at the age of 54. She did not have the opportunity to reflect back on what she had accomplished – not only gardening, she made our dresses, knitted, crocheted, and tatted (I still cherish her crocheted cloth, made around 1932.) Her spare moments were spent reading historical books and listening to opera on the radio. Saturday afternoons she also served as councillor on the district school board.

These memories were brought back to me on July 16, 2005. I returned to Saskatoon with a certain feeling of pride that the name of my parents (tillers of the land and so willingly sharing ‘their wealth’ (the garden produce) is remembered to this day by the second and third generation of our original neighbors.