This celebration was organized by the Board of Directors along with members of Faith Evangelical Lutheran Church Canada, Saskatoon and a grant from the Saskatchewan Government Centennial Committee.

Pastor Howard Ulmer led the service. Memories were shared by former Pastor Lowell Guebert and Bill Heise. Government representative Lynne Yelich MP for Blackstrap, and Roland Tamke, a Councillor for the RM of Dundurn spoke of these God loving pioneers who overcame many hardships to create this legacy for all of us! Approximately 136 worshippers attended this anniversary service. Hymns of praise and worship filled the church!

Lunch was then served and everyone visited!

Sack races, foot races, and 3-legged races were a great success with both the kids and adults especially with chocolate bars for prizes! Horse drawn wagon rides were enjoyed by “young” and “old” to complete the program.

October 08,1905, a group of German Evangelical Lutherans in the Haultain district south of Saskatoon gathered for the purpose of organizing a congregation. A traveling missionary, Rev. F. Brockman, was in charge of this task. The church that was organized that day took its name from the nearby elevator and railway siding, Haultain, and became known as Haultain Trinity Lutheran. 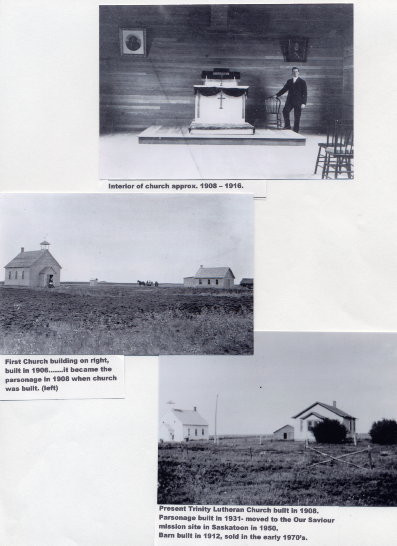 Most members were German speaking. Originally they moved from somewhere in Austria to North Dakota and then came to Canada in 1903 and settled in this area.

The families met in homes until 1906 and at that time a 20 foot x 26 foot church was built. Two years later, a permanent building was erected and the former one became the parsonage. Familiar names that were instrumental in building were the Hermans, Meinharts, Ulrichs, Poiers, Anweilers, Heises, Pfeifers, Heucherts, Walters, Hartzs, Sommerfelds along with other families.

The church grew and flourished to more than 200 baptized members.

During the 30’s and post-war 40’s, many young people and their entire families left the area in search of employment. Trinity, through its pastors, was instrumental in founding other congregations in Saskatoon, including St. Paul’s Lutheran in 1907 and Our Savior in 1950. In 1965 Trinity and Our Savior merged under the name of Faith Evangelical Lutheran Church. 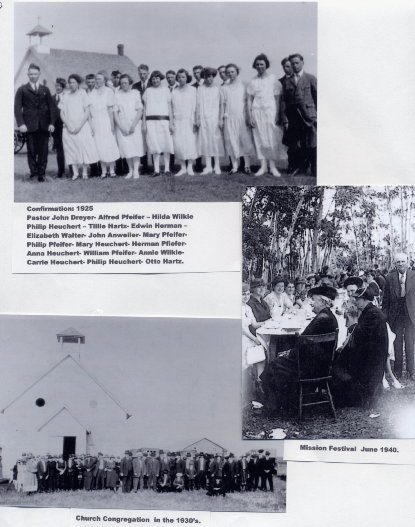 The church had no electricity or gas in those days. A potbellied stove in center of church kept the church warm. Kerosene lamps were lit to provide light inside the church but at Christmas there was always a 12 foot tree decorated with lighted candles. Until the mid-40’s, all services were held in German. Men sat on one side of the church and the women and children sat on the other side and the young people after they were confirmed sat in the balcony.

The minister did not get paid much those days. He had his own cow, calf and chickens and little garden.

The Church was the center of the little community. It was a place to gather to worship, visit and socialize and get news of each other.

This little church still stands, and remains an important component of local Lutheran heritage. The cemetery behind the church is still in use but only for descendants of the original members.

Faith Lutheran Church, Canada has a committee established for the continuing care and upkeep of Haultain Trinity Lutheran Church and Cemetery. You may address any comments or concerns to:

I was born in this Haultain district and baptized right here in Haultain Trinity Lutheran Church in 1921. In fact I spent many days other than Sundays in this church during my youth. We had Saturday school here and two weeks of summer school every summer. In 1937 I was confirmed here after two years of instruction by the pastor every Saturday. There were twelve of us being confirmed and we all had to memorize many bible verses and articles and commandments from Luther’s small catechism. On confirmation Sunday we sat in a semicircle around the altar repeating what we had learned. It was a long time ago but I still remember it well as it was a very important day in my life. 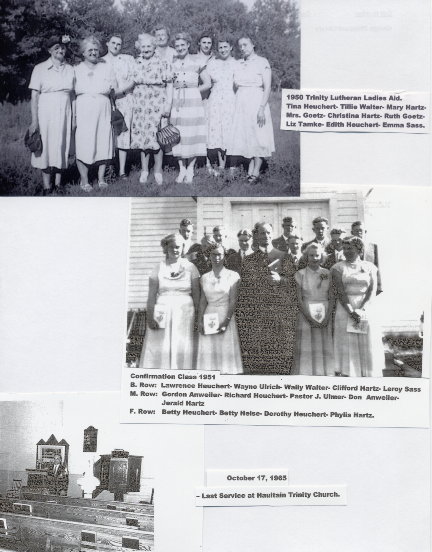 I have many memories of this church and the people who came here through the years. Christmas Eve services were always special. In the early days most people came by sleigh and as this was our only service in the dark they had coal oil lamps and later on gas lanterns for light. I remember taking a lantern into the big barn after the service to find our horses in the dark. You can imagine what it was like in cold weather – the steam, sweat and breathing of over 30 horses in one barn. But cold weather, finding the way in the dark and all those other hardships never deterred our Haultain church families as every Christmas Eve everyone was there. And talk about taking risks – the Christmas tree was lit with real candles. The trustees stood by with a damp cloth on a bamboo pole to put them out when they burned to the end or on rare occasion accidentally tipped over. Christmas was an important time of year at our little country church. Our people were very dedicated and hardy, after attending Christmas Eve service, the next morning everyone bundled up and got back into their sleighs to return for Christmas day service.

There were many faith celebrations in this church from baptisms to confirmations, to weddings to funerals. One wedding was held on Easter Sunday right after the Sunday morning service. The bride and groom just came to the altar at the end of the service and the whole congregation just stayed to listen to them exchange their wedding vows. It also wasn’t your typical limo service to the wedding for the bride either – the roads were covered in snow and melting snow and there was a lot of mud everywhere. So it was reverse order and the bride-to-be was carried over the threshold before the marriage as she was lifted out of the wagon box and carried to the church as the wheels were covered in mud and she didn’t want to have it all over her beautiful white dress. 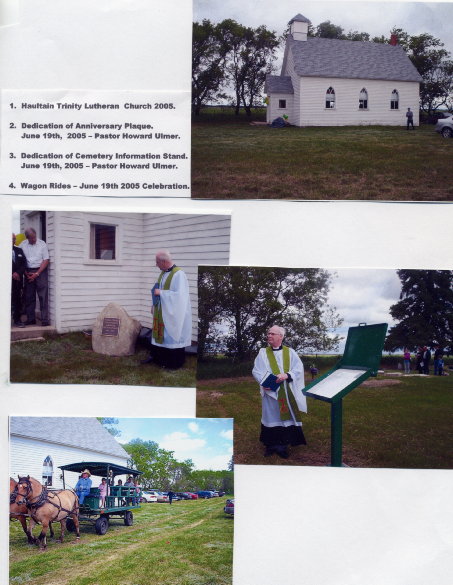 Times were simpler then but there was still all the same celebrations and ceremonies that we have today with the same emotions of happiness and sometimes sadness. Patience was needed even back then! For example to have our picture taken during confirmation we had to stand perfectly still for over 3 minutes in order for the picture to take – so if you young ones wonder why we sometimes looked like zombies in our old pictures that would be the reason!

You might ask if the young people were the same? – Yes they were! Did any of them ever create trouble? – Yes they did! My younger brother tells the story about playing tag around the altar when the pastor went to eat lunch during Saturday school and how they almost knocked it over – beautiful glass prisms and all! In the early days the women and children sat on one side of the church, the men sat on the other side and the young people after they had been confirmed sat in the balcony.

So there was the time that Pastor Threinen stopped in the middle of his sermon to tell the young people in the balcony to keep quiet. Pastor Fry also stopped in the middle of the sermon and we all held our breath but it was only to kill the fly that had been bugging him throughout the whole service. So yes, we young people had fun and caused a few disruptions even back then.

The pastors of this congregation over the years were very busy and often had very meager earnings. Those little rounded sacks that we used to pass around on the end of a long pole during collection time were so small because people could not afford to put much in – sometimes nothing and sometimes just a few coins. The pastor’s family lived in a house right beside the church. The first one was built in 1905 and the second one in the 1930’s. Besides the church barn there was also a small barn beside the house to help supplement the pastor’s meager earnings – in their own barn they often had a cow or calf that they raised for milk and beef. 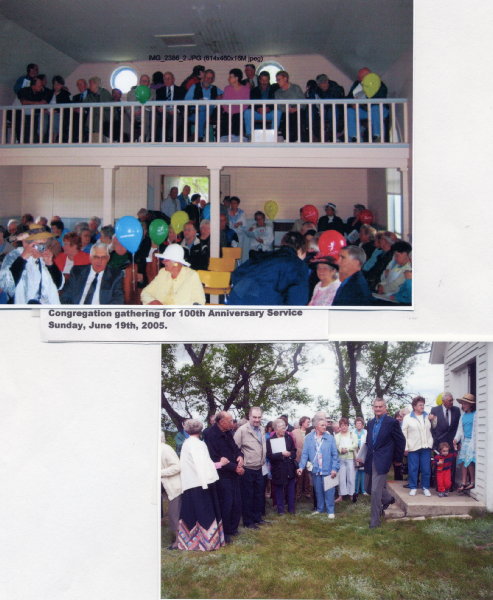 Pastor Threinen had a pony that his kids took to Haultain School which was two miles west of the church. Pastor Wirth also had chickens. I remember looking after the animals and chickens for Pastor Wirth and having the best reward. Pastor Wirth made his own root beer and had hung twelve bottles down the well to keep it cool. On a hot summer day that root beer was absolutely the best!

The pastors had a tough time in winter getting to visit their parish members, but they were dedicated and Pastor Baron took to using skis one winter so he could visit his church members through even the highest and toughest snow drifts. Everyone tried to help the pastors out as they could. Phil Hartz who lived close to the church would come a couple of hours early every Sunday in winter to get the pot belly stove going so the church would be warmer when service started. In the early years, the pastor also did all the teaching of the children, there were no Sunday School teachers. However, in the early 40’s Edna Walter and I were the first ones to teach Sunday school other than the pastor. Others helped out when it was time to build the church chimney, repair roofs, build a new house, provide chickens, etc. In those days people had little money but lots of heart when it came to helping out their pastor, they would be there when needed.

This little country church yard holds many memories! Some things are gone and some have moved to new places. The pastor’s barn and the barn that we had for the congregations’ horses have both been moved. The pastor’s house that was built in the 1930’s was moved in the 1950’s to Saskatoon beside the new parish of Our Savior Lutheran Church and still stands there today. Our Haultain Trinity congregation has also moved on. In the 1950’s many members were living in Saskatoon so we started a new parish at Our Savior Lutheran Church on Ninth Street and Munroe Avenue. When we outgrew that church we built our current church of Faith Evangelical Lutheran in the 1960’s at Preston and Arlington. But there are things that were left behind. The church itself still stands tall and proud even though it is no longer used for regular church services. But the most important part is in the cemetery behind our little church which holds the physical remains of many of the people who started this church including many of our own grandparents, parents, aunts, uncles and other family members and friends. But the one thing that lives on —— is the spirit of these people who had the courage and vision to build this church in the middle of this sandy land. They live on, both in eternity with our Lord but also here on earth in the hearts of each of us that were brought here to this little country church to learn about the love of our Lord.

May God continue to bless us as we continue on with their legacy and with that love of the Lord in our hearts!