The story of Wilfred S. Hodgins and his wife, Rachel W. Rankin started in the Ottawa Valley where they were born in the last decade of the 19th century. They purchased a farm in 1918 consisting of six quarters of land near Domremy Saskatchewan, where they farmed and raised their family over the next thirty-four years. After selling the family farm to their son in 1952, they retired to their house in Prince Albert for the later years of their lives together.

Wilfred Stevenson Hodgins was born on February 25,1892 at Portage Du Fort, Quebec and lived on his parents’ farm until moving to Saskatchewan in August 1918. He was the sixth child in a family of eleven and in his youth, attended the local public school. He would only complete Grade 7 in school before being needed to work on the farm. At that time farming activities were largely related to livestock, with horses being used for heavy work and cattle, pigs and chickens being raised. There was a lot of hay and some grain grown but it was primarily a beef and dairy livestock operation. As well, there were a number of heavy horses on the farm that were used on a commercial basis for road or railway construction projects.

The community that Wilfred grew up in was known as the County of Pontiac. It was located around the town of Shawville, Quebec sixty miles west of Ottawa and adjacent to the Ottawa River. This area had been settled originally in the 1820’s and 1830’s with almost all of the earliest inhabitants being of Anglo Saxon ancestry, mainly from Ireland and Scotland. The original Hodgins family that arrived about 1830 from Ireland consisted of nine sons and three daughters. For the succeeding generations in the 19th century, the families frequently were of a similar size. It was not surprising that by the end of that century, the land was all claimed and the family had to be looking elsewhere to provide a living for subsequent generations.

During the last decade of the 19th century and the early years of the 20th century numerous relatives and friends left Quebec to start farming on the prairies. In the summer of 1917, Wilfred’s cousin had worked on a farm near Domremy, Saskatchewan. Land was for sale in the area and, in the summer of 1918 on the advice of his cousin, Wilfred and his father William Hodgins purchased six quarters. Much of the land in the province was being taken up by homesteaders, frequently from European countries. A homestead consisted of one quarter of land (160 acres) and was the common sized farm in that period. Thus it was a major investment for that era, to buy six quarters of land, and all the associated equipment and supplies.

A few years prior to purchasing the farm in Saskatchewan, Wilfred had been dating a young lady from the Ontario side of the Ottawa River by the name of Rachel Winnifred (Rae) Rankin. Rae was born on July 5 1894 and raised on a farm near Foresters Falls, Ontario. Rae completed her high school education in Renfrew with a Grade twelve certificate. In September 1913, she commenced teacher training and completed it a few months later. She taught school in Ontario in different communities until the spring of 1917.

In the spring of 1917, she traveled by train across the country to teach school at Senate, Saskatchewan, a small hamlet in the extreme southwestern corner of the province near the American border. She taught until the fall of 1917 when she returned home. At that time, the school closed for the winter because of the harsh weather. She returned again in the spring of 1918 and taught there until November 1918. Wilfred and Rae decided to get married and the wedding was held in Saskatoon on November 22, 1918.

Their wedding took place at the height of the worldwide flu epidemic and immediately after the First World War. The story has been told that their wedding vehicle and the hearse, which was busy collecting the dead caused by the flu outbreak, were the only motor vehicles on the streets in Saskatoon on the day they were married. In any event, they were spared from the very lethal influenza virus that killed millions of people. Following the wedding they moved onto their farm at Domremy.

The farm where Wilfred and Rae would spend the next 27 winters was located ten miles north east of the village of Domremy or sixteen miles southwest of Birch Hills. It was quite isolated with virtually no traffic on the nearby road in the wintertime. Trips to town were few and far between as the roads were impassible for motor vehicles. The car was put up on blocks from November to April, and any travel during that period was by horse and cutter or sleigh. Because of the infrequent trips to town in the winter, a listing of all commodities to be purchased was prepared in detail. This was known as the “List for Domremy” and the phrase remains in family use to this day as the shopping list for the local supermarket. 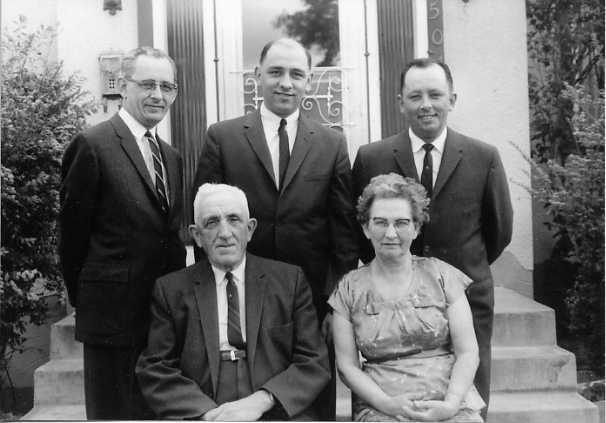 During the period from 1918 to 1940, the family would struggle with the challenges of weather, poor crops and low prices. While their lives were much better than many families in the drought stricken southern prairies, they made little progress in paying off the large debt they had incurred, when they purchased their farm. It was in the years 1937 and 1938 that things reached an all-time low. Fears of foreclosure on their land were a constant worry. The family was extremely grateful to a businessman in Domremy by the name of Alfred Molstad who was the local legal advisor to the land owners- the A and E Pierce Corporation of Montreal. It was Mr. Molstad who encouraged the family to carry on, with the hope that the economy would improve, rather than giving back the land. Wilfred and Rae never gave up hope and tenaciously worked to succeed.

Throughout this period, significant changes were taking place in the agricultural methods being used. In the early 1900’s, horses and oxen were the source of power to do the ploughing, seeding and harvesting of the grain crops. Wilfred was raised and trained in the use of horses. This was the kind of farming he knew and enjoyed. At the time of his arrival in Saskatchewan, steam engines were becoming more prevalent but horses were still important and oxen were rapidly disappearing. Steam engines were used until the early 1930’s when gasoline engines came on the market. By the early 1940’s, horses would no longer be a major factor in the grain industry because rubber tired tractors powered by gasoline or diesel fuel took over.

Until about 1940, the family had only enough resources to buy modest equipment for the farm. Coincidental with the start of the Second World War the crops improved and so did the prices. By the end of the 1940’s the family had been able to pay off the large land debt outstanding as well as to buy new cars, trucks, tractors, combines etc. It also provided the opportunity to live in a house they had purchased in Prince Albert for the winter and until they retired there in 1952.

While farming activities were the source of income and the everyday work to be done, Rae and Wilfred devoted much of their time to raising a family of three sons.

Rae gave birth to their first child, Wilfred Rankin Hodgins at the Wakaw Hospital on November 22, 1921. Dr R.G. Scott who was both a trained Presbyterian Minister and a Medical Doctor attended her. Dr Scott served a large area around Wakaw from 1908 to 1946 and he was a well-known pioneer in the medical field in the province.

A second son, William Arnold was born February 16, 1927 in the Birch Hills hospital and on August 25 1933 Rae would give birth to their third son, Kenneth Wallace, in the Wakaw hospital.

Although there were some major health challenges for the family in the early years, for the most part, the family remained healthy and was able to carry out all the duties inherent in a full and active farm life.

One of the top priorities for Wilfred and Rae was to provide for a good education for their family. The boys attended a typical one-room country school located about three miles from their farm home. The family had the usual challenges of that era in getting young children to school through good and bad weather. It was fortunate that Rae had been a teacher and was able to give the children a good start before they attended the local school. Both Wilfred and Rae were members of the school board at different times during their life. The local school known as Golden Rod School District #1757 was organized in 1907 and continued operating until 1949. In later years the district became part of the Kinistino Larger School Unit.

It should also be noted that several of their grandchildren and spouses have also graduated from the University of Saskatchewan and they include a Past President of the Students’ Union and a Past President of the Alumni Association. Other members of the family have received post- secondary education at various centers of higher learning in both Canada and the United States.

When she was four years old, Rae lost her mother due to cancer and was raised by her grandparents. They immigrated to Ontario in the 1850’s and were Presbyterian farmers from Northern Ireland. This background was a major influence in the way they approached life, and passed on their values to their children and grandchildren.

Wilfred and Rae had a relatively quiet social life. They never drank liquor and they were critical of anyone who did. Although some members of the family smoked tobacco, it was strongly discouraged and most stopped smoking at an early age as they recognized the risks involved. Gambling was very restricted in their era and with limited amounts of money for most of their life, it was not a factor.

Neither had any special athletic talent but they enjoyed attending sporting activities. Wilfred loved to tell about watching Cyclone Taylor play hockey for the Renfrew Millionaires in the early days of the Stanley Cup in Canada. When the automobile bonspiels started in Nipawin in the late 1940’s, he traveled by train to see the best curlers in the country take part. They loved watching baseball and attended many Sports Days around rural Saskatchewan.

Wilfred and Rae Hodgins celebrated their 50th wedding anniversary in Prince Albert in 1968. Wilfred became ill shortly after and passed away on Sept 7 1969 at the age of 77. Rae remained in good health until she was over 90 years of age and regularly traveled around the country to visit her family. She passed away at the age of 92.

contributed to the development of Saskatchewan and their legacy includes three children, eleven grandchildren and fifteen great grandchildren who have taken up residence in various parts of western Canada, doing a variety of work and activities.