1937 – Our story began when T.R. Luke decided to represent independent insurance companies like Gore Mutual and Dominion of Canada Insurance Co. Ltd., rather than the more “closed shop”, board or group companies. Thus Independent Agencies was born as a competitive, independent company.

1977 – Gerald Grunert joined us to service farm clients and to co-ordinate the crop-hail business purchased from Alfred Fenske of Springside.

1982 – In April, Independent Agencies purchased the crop hail insurance business of John Thompson of Theodore and in May we opened a branch office in Theodore through J.J. Hart Agency.

1986 – We acquired the Mansel Powell Agency in Ebenezer.

1999 – Independent Agencies became part of the WFG (Western Financial Group) family which has carried us forward to the present. 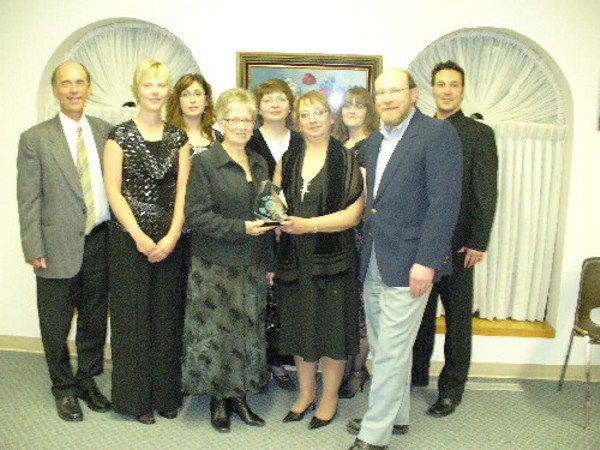 Yorkton Chamber of Commerce – Celebrate Sucess Night
Year: March 12, 2008
Place Name: Yorkton, SK
In the photo, L to R: Barry Marianchuk, Tammy Smith, LeeAnna Nakonechny, Joanne Geysen, Rose Maleschuk, Carol Kitchen, Karen Rosin, Larry Off, Mike Hordichuk.
Wall of Success winner at the Yorkton Chamber of Commerce “Celebrate Success Awards” night, March 12, 2008, in Yorkton.
The “Wall of Success” award recognizes pioneer, corner stone business leaders who demonstrated excellence over an extended period of time, whose business has contributed to the economic wellbeing of Yorkton and immediate area. The business must have been in continuous operation for at least 15 years.
Our office was nominated by an ‘anonymous nominator’ and was one of a three way tie winner.

We are proud to serve the community of Yorkton and hope to do so for many years to come.