The Resort Village of Katepwa Beach

The Resort Village of Katepwa Beach has meant and still means many different things to many different people. For some it’s a week end and holiday retreat, for others it’s a delightful location to be found while driving along the beautiful Qu’Appelle Valley and there are those who call this village along the east shore of Lake Katepwa their permanent home.

The name Katepwa comes from a Cree phrase meaning “Qu’Appelle” or, in English “Who Calls”. The first English speaking settlers here used the spelling Katepwe with an “E” at the end. For many years some maps and documents spelled it Katepwe and others spelled it Katepwa. Katepwa spelled with an “A” was given the final stamp of approval in the first edition of the “Gazetteer of Canada. Saskatchewan” published by authority of the Canadian Board on Geographical Names at Ottawa in 1957. 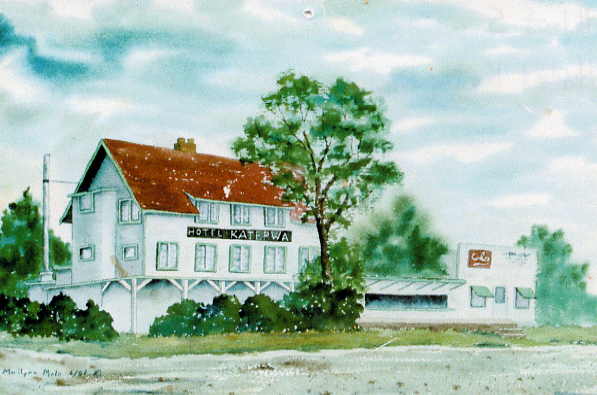 Hotel Katepwa
Place Name: Katepwa Village
Image Source: Marilynn Malo
This is a copy of a painting by artist Marilynn Malo of the Katepwa Hotel in the early 1900’s.

The Qu’Appelle Valley extends 400 kms. across southern Saskatchewan from the Qu’Appelle dam on Diefenbaker Lake to the confluence with the Assiniboine River in Manitoba. The valley was formed 14,000 years ago when the retreat of the massive continental glaciers produced torrents of meltwater. Since that time its history has been that of erosion of the valley walls and deposition of sediments so that now it is only one-half of its earlier depth.

Throughout its length, the Qu’Appelle Valley provides many habitats ranging from the treeless grasslands of the west to the hardwood forests of the eastern areas. This variety is evident in the Lake Katepwa area making this portion of the valley significant to wildlife and an interesting area for the naturalist. Lake Katepwa provides a home for some twenty species of fish and is also a sight for waterfowl. In the spring rafts of ducks, swans and geese may be found and they are joined by herons and pelicans in the summer. In recent years Katepwa also boasts a few pairs of bald eagles who have chosen to winter here.

Lake Katepwa is one of the valleys four main lakes. Katepwa, Mission, Echo and Pasqua Lakes, collectively called the Fishing Lakes, once formed one long lake. Streams washing down the valley sides built up dams of sediments that divided Fishing Lake into four individual bodies of water. At Katepwa Point, sediments that washed down the valley side have settled out over a broad fan shaped area called alluvial fan. Today, this fan is the location of the Resort Village of Katepwa Beach. 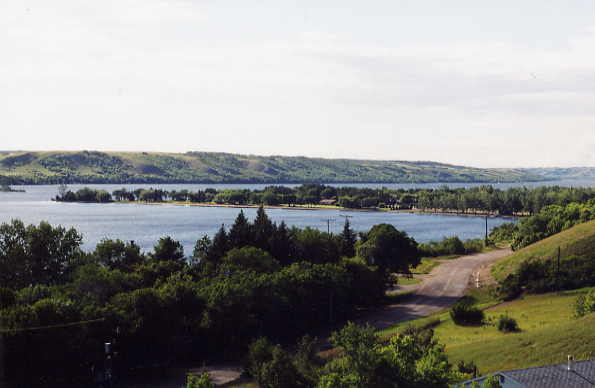 Native Indians were the original inhabitants of this area and depended on its resources for their existence. A small Metis settlement made its appearance at the end of Lake Katepwa in 1880. Shortly thereafter the Metis were joined by settlers from the east.

During the early 1880’s the first brick factory was built east of Indian Head by Arthur James Osment, a Londoner who had migrated to Canada, and was run by Clem Peltier who was one of the little group of settlers living in the Metis settlement. The factory was moved to Lebret about 1898 but when it did not succeed there, the equipment was sold to Clem Peltier who moved the factory to Lake Katepwa. The material needed to operate the factory was obtained from nearby; the sand from pits a few miles away, the lime from a hill between Katepwa and Lebret and the water from the lake. The yellow bricks from this factory were supplied to farmers and for buildings such as the hotels at Cupar and Yellowgrass as well as many buildings and houses in Indian Head.

The earliest communications were Indian smoke signals followed by post offices in local homes. The telephone came to the Katepwe district around 1910.

Evidence of transportation by Red River carts more than a century ago can still be seen in the Qu’Appelle Valley. In 1883 a combination wooden bridge and dam was built across the Qu’Appelle River but was destroyed by a spring flood in 1904. Following this loss Clem Peltier operated a ferry close to his buildings which was used extensively by farmers hauling bagged grain to Indian Head elevators and flour mill for a charge of 50 cents for a team and wagon.

The first church services at Katepwe were conducted in a private home by Reverends Father St. Germain and Father Compeau. Services continued to be held there for some 20 years until Oblate Fathers purchased the original Katepwe School for a church in 1921.

The early Anglican settlers travelled to services in Fort Qu’Appelle once a month. In 1886 “All Saints” Katepwe Anglican Church was built. There is a small graveyard beside the church where many original settlers are buried.

Catholic interment has always been at Lebret. The Indians didn’t have a burial ground as such. Chiefs were buried on a hill, others often in overhanging river banks. 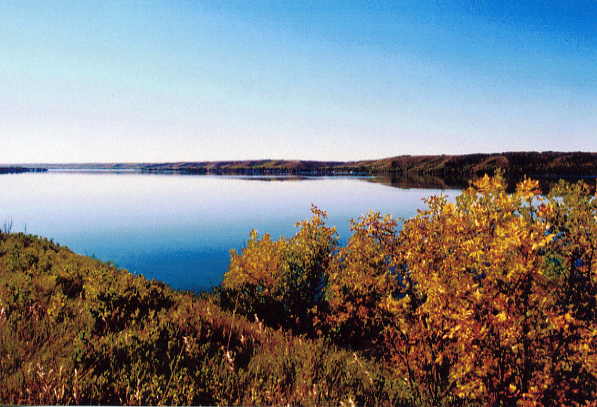 Lake Katepwa
Year: 2002
Place Name: Katepwa Village
Image Source: Larry Myers
This photo is a view of Katepwa Lake in the fall of 2002.

Two years after the main influx of settlers into the Katepwe area a school was started. Prior to this many children were being taught at home. Katepwe School #116 was opened in 1887. By 1905 Katepwe School District was well established with a regular teacher who earned a salary of $650.00 for a school year from March to November with two weeks holiday in early

In the summer the lake was very popular for water sports, canoeing, racing, an annual Regatta and Old Timers picnic.

Skating provided a great pass time in winter. Also during the winter after the lake had frozen over, many of the Metis would put fishing nets through a hole in the ice, with what they called a “jigger”. In a day or two the men would come and pull out the net with a catch of pike, pickerel, white fish and tulibees. In the early 70’s, commercial fishing took place a certain time and season on Lake Katepwa when only tulibees were caught in the nets. These were sold to firms for fox meat. Today ice fishing is still a very popular winter pass time with many ice shacks dotting the lake as soon as the ice is thick enough to support them.

Katepwa Wheat is a variety of hard red spring wheat which bears the name of our lake and was developed by a team of scientists working at the Winnipeg Research Station of Agriculture Canada during the 1970’s. Licensed for use in 1981, Katepwa Wheat is well known for its desirable qualities which include high yields, early maturity, high protein content, improved resistance to rust and easy threshing.

The village was incorporated as the Summer Resort Village of Katepwa Beach on August 1, 1957. Today this wonderful place called Katepwa in the Qu’Appelle Valley still calls many people for the same reasons that it did in the beginning as well as a few new additions. 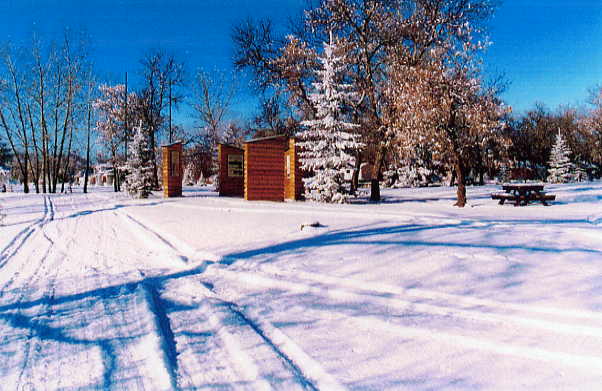 One of the well-known spots to the locals is the “Pimple Hill” which is a Katepwa landmark. There used to be a building on it called a Cupola where names were written or carved on every available space.

Cutout Coulee Trail (1.6 kms return) winds through a picturesque coulee and up on to the top of the valley for a panoramic view ofKatepwa Point. A pavilion, at the top, offers a sheltered place to sit and enjoy the view and a chance to add your name to the autograph log.

Hillside Nature Trail (8 kms return) begins by travelling along a portion of the Trans-Canada Trail. It then turns off to climb through a series of coulees and hillsides to reach the valley top with interpretive signs explaining the natural community of the valley hillside along the way.

Katepwa Beach is one of the best swimming spots in the valley. Facing south, it is protected from waves and lake currents that wash windrows of algae blooms onto other shoreline locations in the valley. An aquatics program usually runs at the lake during July and part of August. It also offers facilities including a boat launch, change house, picnic tables and barbeques, a hotel with a dining room, a concession booth and restaurant, grocery stores, rental cabins, a campground, two golf courses and a driving range. 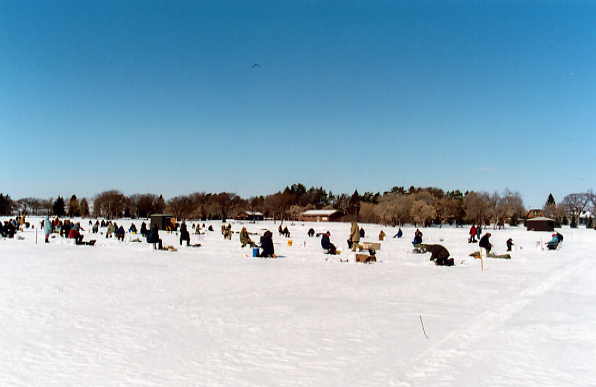 The number of cottages, commuters and retired people who live here year around continues to grow in this quiet setting of natural beauty in our beloved valley.

*Information was obtained for this history submission from the following sources: