A blue eyed red-headed granddaughter has asked about our wedding. As this is our 56th wedding anniversary we have been “remembering” and this is what we remember.

For various reasons we could not be married at Carievale, where I lived with my Grandmother and uncles and aunt, so I went home to Mother and Father at Souris just after New Years’ 1911. Before Jack left in October to go to the homestead we had agreed to be married early in February so as to get settled in before Spring work started. Shortly after New Years’ Jack wrote that we had better postpone the wedding until Spring as the roads were very bad. He had no conveyance to get to town, no one to look after his horses etc. Through letters I made him understand that I didn’t like that idea and arranged that I would be ready whenever he arrived as soon as he could manage to get down to Souris. That meant that we could not have the wedding Father wanted in the little country church a mile from their home, and with friends around. So Mother and I kept busy, made the wedding cake, which Mother decorated beautifully, quilted and sewed bedding etc., and waited. 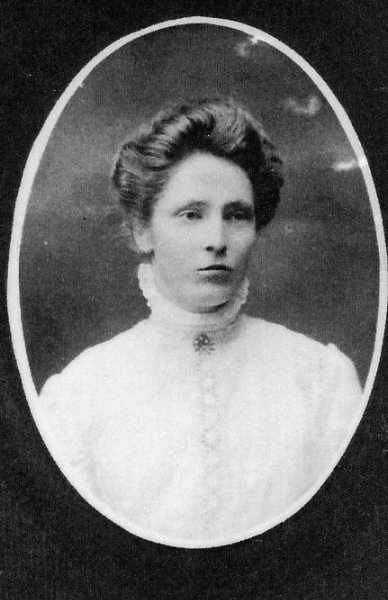 We were getting ready for a Tea-Party on Feb. 15, Mother’s 44th birthday when the telephone rang and it was Jack at the home of his Uncle and Aunt Lizzie Green in Souris. He had arrived on the 2 pm train. He wanted to get a livery team and come out. But I wouldn’t hear of that as $15.00 was too much for a homesteader to spend. So after talking he said he would get back as soon as possible. A neighbor was taking care of one team, he had left the other team and a borrowed sleigh in the livery barn at Laura, and the house would be freezing up. So I said we could be in Souris the next day if he could get his part ready. He said his Uncle Harry would (help) him and what kind and size wedding ring did I want. I said I would like one like Mother, a flat-wide one. Later that evening he phoned that the ring was bought, the license obtained and the wedding would be in the Anglican Deanery in Souris. It was too cold to heat the big church. So Father got his sleigh ready, loaded my packed boxes that wouldn’t freeze, put a wash boiler filled with oats on the stove filled the oven with big stones, set the alarm for 6 AM and went to bed. A very excited bunch of people. 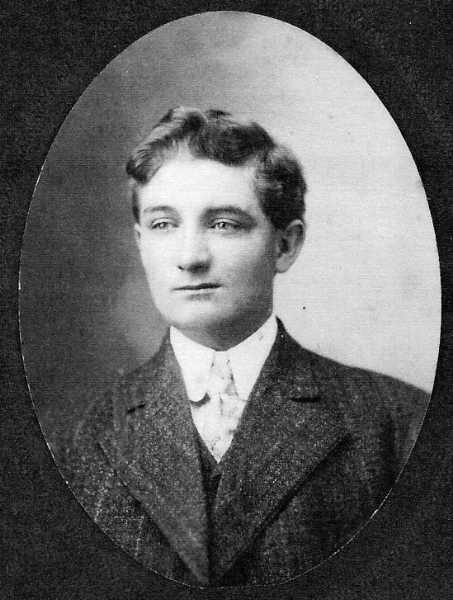 Next morning we were up, had breakfast and got our warmest clothing hunted out and finally got away shortly after 8 AM, not quite daylight. Father had got hay in the sleigh box, covered it with blankets, put the hot oats in a big sack for Mother and me to sit on, and the hot stones at our feet. When we were seated, Father put a big binder canvas all over the sleigh box, except where he stood in the front. So off we went. Ruby and Edna, my sisters, were caretakers at the school so had to go to school, and didn’t like that. We had 14 miles to go from the farm, it was -40 degrees, but sunny and calm. Half of the winter trail was on the ice of the Souris river where the trees were hanging down with hoar frost, so it was a lovely drive but slow, and we did not get to town until 10 AM. Father put the team in the livery stable and the stones to warm for the going back. We went into the Crescent Hotel and met Jack and several friends I knew. Talked for a while then had dinner in the Hotel where Father had reserved a table the night before. What we ate I do not know but the Hotels at that time served very bountiful diners at noon for farmers coming long drives into town. Then Father got out the team again and we drove a mile around the river to the Deanery and Aunt Lizzie Green was already there. The little altar in the Deanery had candles and a couple of blooming plants. So with Mrs. Hewitt, Aunt Lizzie and Father and Mother, John Richard Harrington was married to Rosa Mae Kelly on February 16, 1911 at Souris Manitoba.

As the train was to leave around 3 PM we had to drive back about 1 1/2 miles to the station in time for Father to check out the boxes and us to check our luggage. We had about 1/2 hour to wait and during that time one of my uncles came in on the Winnipeg train and another from Brandon.. So I said Good-Bye to them. The train we took via Brandon had a few of our friends on it going to Brandon Bonspiel and we had a visit with them.

Well Jack had bought a suit in the Fall before, dark gray tweed with greenish specks, and his overcoat was black melton cloth, with a sea otter fur collar, and a dark gray fedora hat: he looked smart. 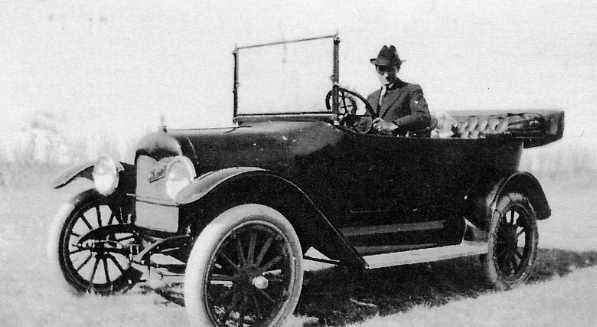 Mother and I had made a cream cashmere dress, in a shirtwaist style, with lovely white pearl buttons, and a fischu of real Nottingham lace that my Great-Grandmother had made in England before coming to Canada. I couldn’t wear that at -40 degrees so did wear my new fall suit of dark green wool and a white lace blouse, also had green kid gloves and a big dark green hat with drooping on one side. I had a big taffeta silk rosette on the droopy side that held in place a 16 inch white ostrich feather coming down behind my right ear. And over all I had to war my black astrakan fur coat with the sable collar. Green was, to me, a very becoming color. I thought I looked smart, too, in spite of the old saying “Married in green not fit to be seen.” 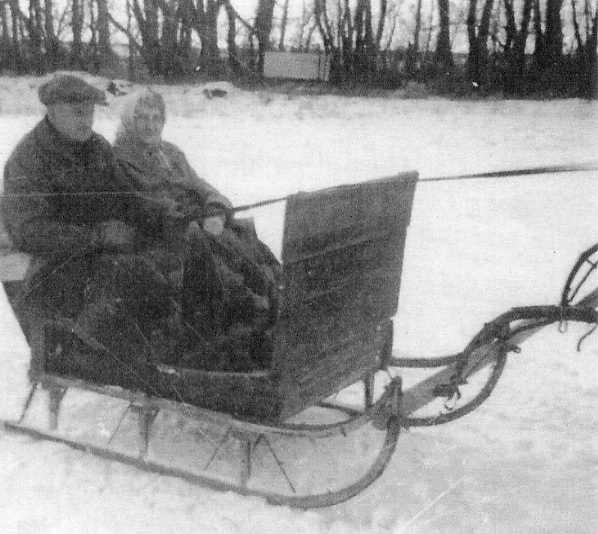 Well, Jack and I changed trains at Brandon, changed again at Regina about 11:30 PM and got to Saskatoon about 6 AM. No diners or sleepers on any of those trains so we got breakfast at the Empire Hotel and a room to freshen up. . Left about 10:15 AM and got to Laura about noon where we had dinner in the Hotel. Jack got the team out of the livery barn, loaded up our luggage and started south. It was bitterly cold and nothing much to see after we left the Laura sand hills. A big prairie fire had swept thought the area about 6 years before so even the prairie brush was too small to see in the deep snow. We got to the Jim Rose place, (after 4pm) where Bob and family live now, and Jack got the other team of horses he had left there. It had a sod house on it with a 24 inch window. Mr. And Mrs. Hedinger had been visiting there for the day so each of the four panes had a face looking out. They wanted us to stop but I held the horses until Jack got the extra team tied on. Then we started home. I could not see any trail but Jack did and kept telling me that the creek ran there, and the creek ran here, and that was the beginning of our land etc. but I couldn’t see anything but a wide expanse of white snow. And was surely glad when we stopped at the shack at dark. Even the sod barn was covered with snow and I stepped up to my knees in snow when I got out of the sleigh. Jack had left plenty of wood and kindling so soon had a good fire started before he put the team away. What we had for supper I do not remember. Mother had given me cookies and cooked ham which I had in one suitcase so I suppose we ate some of that.

In 1909 the first year Jack came to the homestead he had lumber hauled out from Tessier and built a building 12 X 16 ft. on the field west of our trees and lived in it that winter coming out in the spring to work. Next fall, that he was to get married, he had that building moved into the bend in the creek and built onto it another piece, on the west: 12 X 10 ft. for a bedroom. During that winter he lathed both parts and covered the inside with a bluish gray heavy building paper. Put a shelf in the bedroom to hang clothes under, and put up a three cornered cupboard in the living part, on top of which he had the tea kettle, the tea pot and coffee pot. As they were all chrome plated they looked lovely. He also built a movable wash stand that held the water pail on top and slop pail below. He had built a small table, had several chairs and the small, 4 holed “Gem” stove. He had bought a full dinner set of dishes, with light green scrolls, a supply of cutlery and pots; in fact was a very “sophisticated” bachelor. I thought everything was lovely. The barn was sod and big enough to hold the 4 horses, 1 cat and 1 rooster. That was what I came to on Feb. 17th, 1911.

Am I sorry? Not yet. And I don’t think Jack is either. Does this answer a grad daughter’s curiosity? It’s being written on our 56th anniversary 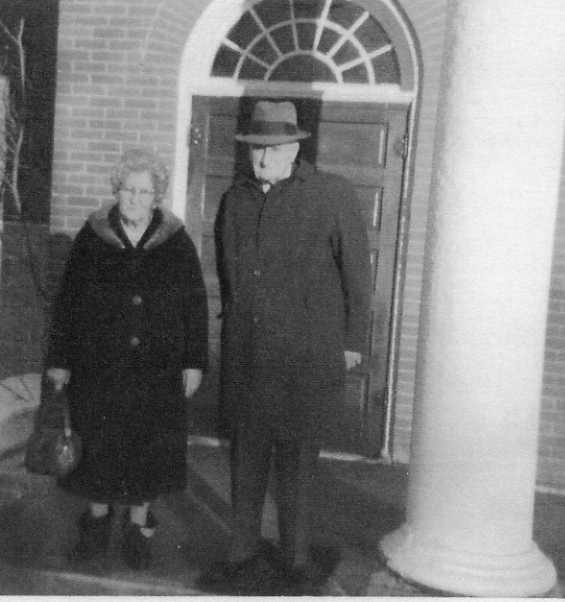 In answering Josephine’s questions Mother didn’t include a few things I remember our parents telling us. On the way home, before they got to Jim Rose’s, they had to drive through Billy Baird’s yard. He heard them coming and made them a gift of 2 Plymouth Rock hens in a sack. That was the start of the flock we all remember. Another incident happened a few days after they arrived. Dad had to return to Laura to get Mother’s trunk. A fierce blizzard kept him away for three days. It was the first time in her life that Mother had ever been alone. Of course, she had two horses, a rooster, two hens and a cat out in the sod barn.