It was in 1906, exactly 100 years ago, that William Anderson MacFarlane headed west from Ontario to find a homestead, and a year later he brought his bride, Fannie Whiteside, out from Ontario to share it with him. They were married in Metcalf, Ontario on February 19, 1907.

The homestead was north-east of the present town of Nokomis. Along with his sister, Christina, (who later married Jimmy Kidd, a fellow homesteader, who with William’s brother Archie, had come out in 1905) was awarded the post office in the vicinity with the name of MacFarlane Post Office. 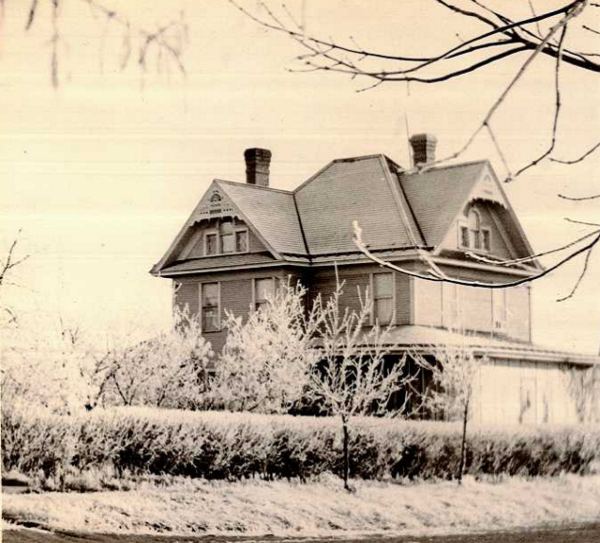 Later, with the CN rail line going through a few miles further south, the town of Nokomis was established there, and Mrs. Halstead was named postmistress. It was she who chose for the town the name of Hiawatha’s grandmother, Nokomis.

In 1910 William and Fannie built a fine home in the town of Nokomis and W.A. or Willie (as he a was known) opened an office and started a Real Estate and Insurance business.

After getting settled in their new home, the MacFarlanes became very active in the building of the community and for many years enjoyed life with their family — Annie, Marion, Jessie, Gladys, Hazel and Donald — in the great little town of Nokomis. Each member of the family earned a Grade 12 diploma from the old brick Nokomis Nigh School.

Family activities centered around the United Church, with its’ CGIT and choir practices, the skating and curling rinks, and the tennis courts which were just across the street. Jessie was interested in golfing, so with some of her pals they built their own course in the vacant field down from tennis courts, using tin cans inserted in the hard earth as “holes”, but it wasn’t a very long lasting venture. As for the tennis, all the girls (except Hazel)and Don were good players and enjoyed the sport for many years, even after they left the home town. But the skating and curling rinks were almost our second home during the winter months. We all loved skating, especially when the brass band played for us on Saturday nights. Mother ii Dad both loved their curling, although Mother was too busy preparing food to be brought to the rink during bonspiel times to get many games in. But the men bonspieled almost all winter, if there wasn’t a “thaw”, and went from town to town along the line, Govan, Strasbourg, etc. and brought home the loot. Mother and dad’s big brass bed was one of his big trophies.

Saturday mornings were busy times in mother’s kitchen, when she was preparing for an influx of friends and relatives over the weekend. Cousins, and there were many of them, always dropped in when they came to town for Saturday night shopping, or the movies at the local theatre. Saturday evening was also often the time for a game of bridge with the Jamieson, followed by lunch of home-made buns or one of mother’s special tea-rings, or red devil’s food with seven minute icing (chocolate cake, so big she baked it in her roasting pan). A similar menu was used on Sunday evenings after church (we had both morning and evening services then) when the gang usually arrived at MacFarlanes for a sing-song around the piano. 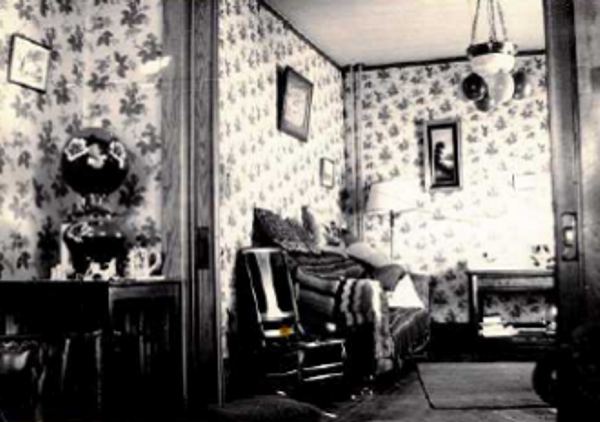 The outbreak of war in the fall of 1939 meant great changes for the young people of Nokomis, including the MacFarlane family. Although the children seemed to go off in many directions, Fannie and William carried on in the family home on Second Avenue. However, William passed away in 1950 at the age of 70. Fannie lived with Hazel in Regina after her husband died. She was 76 when she passed away in 1956.

ANNE, after high school started a business career with the Bank of Commerce in Nokomis. After a few years she moved to Regina and was employed by the Provincial Government. She later transferred to Ottawa and was with the federal Treasury Department for many years. She helped to form a curling club there, and also joined a golf club. She was also devoted to activities in the Dominion-Chalmers United Church and the Eastern Star. Anne and her friends enjoyed many holiday trips…to the Maritimes, Boston, Washington, Florida, and one highlight was a trip to Tanzania with a friend whose son was there on an agricultural project. Finally, she moved west again, this time to Victoria, where she had several happy retirement years. Anne died on her 87th birthday, Februay 18, 1997.

MARION, a school teacher, and from all reports, mighty good one, had been to University in Toronto for a year, then to Normal School in Regina. It was while she was teaching in the town of Wiseton that she met Robert Strachan. They were married in 1939, lived in Saskatoon for a short while, then in the town of Richlea where only son Bill was born in 1942. Bob was with the RCAF for several years. As his parents then lived in Vancouver, after the war Bob and Marion moved there too. It was a place all three of them loved and became their home from then on. Marion’s hobby, oil painting , added a great dimension to her life. She taught math to adult students for several years. They lived in Vancouver for several years and then moved to Tsawwassen where they had a lovely garden and lived close to Beachgrove Golf Course. After a short illness Bob died in 1983 at the age of 68. Marion then moved back into Vancouver.

Son Bill died very suddenly in Mach of 2000 at the age of 58 and Marion passed away that same year at the age of 88. A memorial bench has been placed in the VanDeusen Gardens, Vancouver, in memory of the three Strachans, Marion, Bob and Bill.

JESSIE, William and Fannie’s third daughter, was about 18 when she went off to Toronto General Hospital for nurses training. Unfortunately, she was not well and had to give up on nursing and returned home to Nokomis. She suffered for many years with rheumatoid arthritis. (Now, more than 50 years later, a doctor has suggested she may have suffered from lupus, a disease which was unknown in 1944.) Jessie had great courage and was loved and admired by many. She died on February 28, 1944 at the age of 30.

GLADYS went to Normal School in Regina in the fall of 1935 and taught school for 5 or 6 years. It was while teaching at Cupar that she met Jim Rae. In 1942 she joined the war effort by working for Munitions in Regina, was later transferred to Sorel, Quebec, and from there she joined the RCAF in Moncton, N.B. and Newfoundland. It was 1948 when she married James Paterson Rae and lived the busy and exciting air force life again with him, first in Rivers, then on to Montreal, Comm, and back to Montreal again, meanwhile raising three sons and one daughter. After Jim’s retirement from the force, the family settled in Calgary where all four children graduated from university, Don in Geology, Doug in Law, Dave in Economics and Debra in Nursing. Tim was employed with Nova Corporation for several years, and then they enjoyed winter holidays in such places as Arizona and Hawaii. However, Jim passed away after a short illness in 1997. Gladys, now in her 89th year, makes her home at Trinity Lodge in Calgary and is surrounded by her loving family and grandchildren.

DONALD, after high school, went to Business College in Regina. He was with the Provincial Government Taxation Division for a few months, but in the fall of 1939 had a severe case of meningitis which resulted in the loss of his hearing in one ear. He joined the RCAF but was unable to continue due to his continuing health problems. However, in 1943 he entered the University of Saskatchewan and graduated from the law school in 1949. He articled in Yorkton and it was there that he met Frances Bretherton. They were married in September of 1951. Son Kevin was born in 1954. In 1955 Don joined Tidewater Oil in Regina. Son Bill was born there in 1957. In 1958 they moved to Calgary where Don joined the legal staff of Mobil Oil Canada Ltd. Daughter Cathie was born there in 1959. 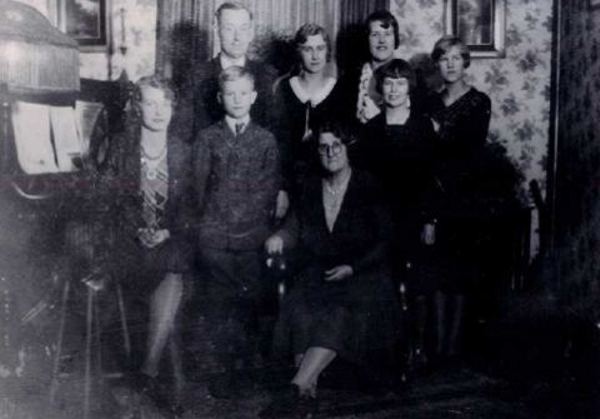 While Don was with Mobil he served as counsel for the Canadian Petroleum Association and as a director and president of the Canadian Petroleum Law Foundation. In recognition of his service to the community (he was president of the Calgary Zoological Society) and the law, he was named a Queen’s Counsel. On retirement in 1983, Don was general counsel for Mobil Oil in Canada.

Over the years the MacFarlane family enjoyed the many facilities of the Glencoe Club (especially for Cathie’s skating and Don’s tennis) as well as the Glencoe Golf Club. A home in Sun Lakes, Arizona was also enjoyed for several winter seasons. Don was diagnosed with cancer of the pancreas and passed away in December of 2001 at the age of 80. Frances continues to enjoy her golfing at the Glencoe Club and is happy to have her three children and their families nearby. Kevin is a lawyer at Petro-Canada, Bill is a petroleum engineer with Nexen, and Cathie has her degree in Education and now is a busy stay-at-home mother to five children,

HAZEL, after completing high school in 1937, had a memorable year clerking at Art Nichol’s grocery store in Nokomis, then went off to Business College in Regina. During the war years she was with the Bank of Commerce, first in Nokomis, then Humboldt, Biggar and Eston. Then she went back to Regina and was a secretary at Toronto General Trusts until she joined Simpsons in 1948. She was a secretary there for over thirty years. A big event in her Simpsons career was the week-long 25 Year Club trip to Toronto in 1973. But her retirement date wasn’t as happy. Simpson retail stores had been taken over by The Bay and on June 27, 1981 Simpsons in Regina closed its doors. After that there was more time for golfing and interesting travels to many places around the world. In the fall of 2003 Hazel moved to Calgary. She misses the Wascana Golf Club, Wascana Park, the Qu’Appelle Valley, Roughrider games, Globe Theatre, Probus Club and many friends, but it’s nice to be closer to five nephews and two nieces and their lovely families.