Hard living conditions, oppression of Ukrainian people by the Polish government, and a desire for a better life encouraged our parents, Ivan and Oksenia Muzichuk, to immigrate to Canada. Following World War I, our part of Ukraine was annexed to Poland. The Polish government embarked on a program of settling Polish people in that part of Ukraine near Kovel. Dad was able to sell his land for cash. This money repaid the loan he had on a woodlot purchase, provided fares to Canada for all members of the family, Mother, Dad, Pete, Fred, Harry and Nina, and a sum of $600 to begin a new life in a new land. 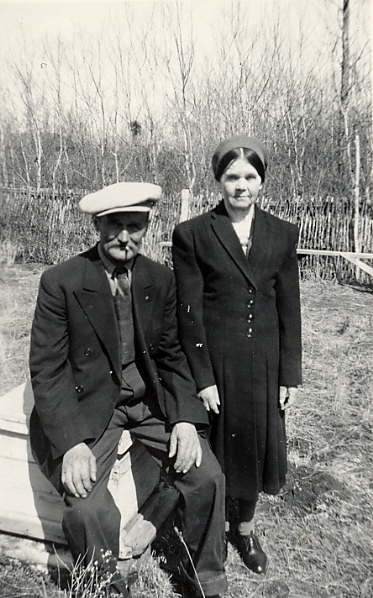 All through April of 1929, sorting and packing were done. We had a huge wooden trunk, a smaller wooden chest for Dad’s tools, a similar chest containing a few dishes and cutlery that we needed along the journey, and a couple suitcases with our clothes for the trip. We went to Danzig by train from Kovel and then took a ten-day trip across the Atlantic on the “Luthiania” to Halifax. The youngsters enjoyed the ocean voyage; there was so much to see and explore. Mother was seasick the entire trip. From Halifax we travelled by train to Punnichy, Saskatchewan and arrived there at 5:00 a.m. Our trunks were unloaded. We sat there until the village awakened and Dad went to enquire about a ride to Mr. Husak, our sponsor. Later a big truck came along, loaded all our trunks and us and we rode the 16 miles northeast to our friends’ farm. We stayed there for two weeks. Dad was taken to Punnichy to buy a quarter section of land SW 3, 29, 16, W2. Dad and Pete walked six miles daily to our new land and built a 16 x 20 house of upright poles and woven willows. This abode was plastered inside and outside. The floor was made of clay.

With a borrowed wagon and a team of horses, we moved to the wee home. It started to rain! Dad and Pete stretched two rolls of tarpaper over the unfinished roof and the children were put into the loft to keep dry. It rained for three days. Mother tried to cook on the stove that was set up in the open. The stove steamed away and sputtered as the rain fell on it. We welcomed the flitch of bacon from the Old Land, which Mother had nestled amidst the bedding bundle in the huge trunk!

There were sloughs nearby for water, but we needed drinking water. A shallow seepage well was dug by hand and served us well for several years. I remember going out to the well in the evening and searching the sky for the Big Dipper, Big W, Orion and the Seven Sisters.

This was our home for three years while Dad and Pete built a two-story house. Our only income that first year was selling willow pickets, rabbit skins and seneca roots. There was no garden or field crop until the next summer. Dad bought a cow and calf, plus two horses and a wagon. The boys snared rabbits throughout the winter and that was our meat supply. Mother was ingenious in preparing Ukrainian dishes and soups. (Now when I make these items, I realize how much time was spent in preparing these meals.) Dad was busy building chairs, a table, cupboards, a barn, a granary, a rail fence on three sides of our quarter, and he broke 30 acres of land. Could you imagine how many trees he felled with the axe so that he could build all this? He cut hay with a scythe and gathered it with a wooden rake that he had made. John arrived in September from Ukraine to join the family after clearing military requirements in Poland. He and Pete worked on farms in Raymore, Semans, Dafoe and Perryville areas. John was also able to get work shingling the pool at Manitou. 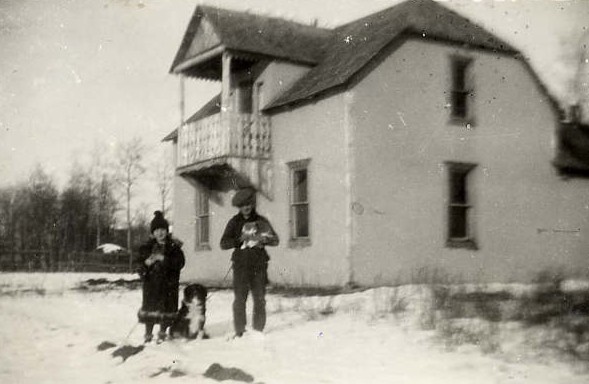 Nina and Harry with cats and dog.
Year: 1934
Our new house which Dad built.

Later we rented a quarter with some summer-fallow on it. That summer Fred plowed the 90 acres with three horses and a walking plow. This proved rewarding as the following year produced a good crop. Mother planted the seeds she brought from Ukraine and our garden flourished.

The three younger children started school at Perryville. Fred was 15 and in Grade 1; Harry was 10. Nina, 6, began the following spring. We walked the two miles to school year after year. Much later Harry got an old bicycle and repaired it for travelling all over the neighborhood. In the winter he fashioned a couple sets of skis and we’d cut across the fields to school or to visit neighbors. Never did we ride horses to school; they were needed for farm work. One winter when Nina didn’t have winter boots for walking, Mother wrapped her feet in cloths, put a shawl over her head and torso, and the two brothers pulled her to school on a home-made sled. Near the school all evidence was hidden in the bush and Nina rode piggy-back on one of her brother’s back. The trip home was repeated, but we waited at the school until the other scholars had gone home ahead of us.

School was an important time in our lives. We were eager to learn the English language correctly, to learn the songs, and to read the books offered in our small library. I still recall Kazan, Barry – Son of Kazan, Girl of the Limberlost, Rebecca of Sunny Brook Farm and many Zane Gray books. We still recite some of the poems we learned in our classes. Christmas concerts were the highlight of the year. We soon knew our parts and everybody’s part, and for several weeks after Christmas, these concerts were re-enacted as we visited our neighbors. Winter school holidays were long because of the cold and snow. Summer holidays were a month and a half.

Fred had the advantage at school because he had learned arithmetic and to write in Ukrainian and Polish before coming to Canada. His big chore was to learn the English language, but he easily advanced to higher grades. Harry and Nina had not been to school before and had to learn everything from scratch. Harry was mechanically minded and a musician. Nina and Fred became teachers and also enjoyed music. Harry got a crystal set, put it together and brought much joy to the young folk on Saturday nights as we shared earphones to listen to Chicago and Des Moines. 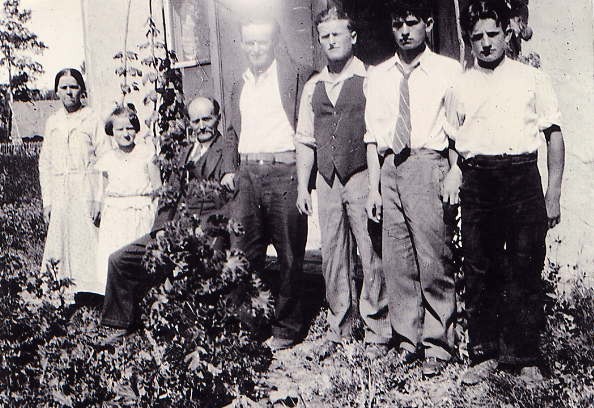 We had to help with chores and fieldwork, and Mother needed help in the house, garden and yard. Every Sunday morning Dad would read the liturgy and sing the responses as well. Usually we helped with the singing, sometimes in four parts. Dad made a three-cornered cupboard in the south-east corner of the big room. Here he kept his prayer books, an icon, candles; a place to worship. The nearest Orthodox church was 20 miles away. We did manage a trip once or twice a year when the weather was nice, but it took a whole day to get there and back with horses and wagon.

In 1936 Dad inspired the Ukrainian people around us to build a church a mile from our home. Each family brought 10 logs. The men built the church, shingled the roof and put a copula on top. To make some money for these expenses, we held dances in our house. The admission was 25 cents and the ladies brought lunch. Music was supplied free by anyone who played an instrument. Dad took his turn on the violin and Harry on the guitar. Later Dad donated a bell for the bell tower, and a chandelier for the interior of the church. During the long winter evenings he made candle holders, frames for the icons, and countless artifacts that are traditionally found in churches of Kiev. His tool was mainly a jack knife and his wood was apple boxes. Services were held in the summertime because of deep winter snow and not much heat generated by the round tin heater. All winter the men, women, older boys and girls practiced choir selections and did we sing out from the choir loft at the next service!

The last service was held in 1970 when we celebrated a memorial service for Mother. The “Blue Church” still stands on Grid 640 and many people call in to see the architecture, the graves and the write-up about the church which remains a tribute to the pioneers who, with determination, dedication, and perseverance brought the Ukrainian religion and tradition to a new land. In 2001 a web site was established to honor the pioneers who worked so hard to have an Orthodox Church in their vicinity. You could view the site on the internet by going to www.ituna-wadena.org. 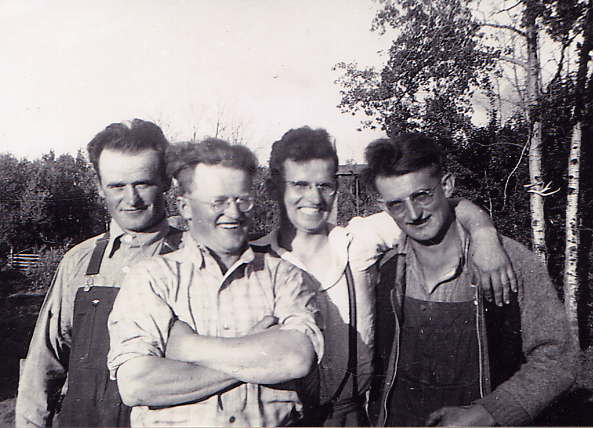 Sundays were great days when young people congregated in an open space, usually our yard, for ball games. Everyone played for the fun of it. Saturdays were house cleaning days and we went through the entire house with scrub brush, soap, water and rag. There were picnics during the summer with ball games, races, stunts and visiting. Oh, that homemade ice cream! The winter nights were long. I used to help Mother tear the soft feathers off the feather shafts. We would sing or she would talk about her life as a refugee during World War I and during her growing up years. Sometimes we would embroider articles to beautify the room.

In later years Dad bought a quarter five miles from home. He started building again – buildings of squared logs neatly fitted. Our parents moved to their new home in 1945 and the old farm was left for Harry and Fred. During his life in Canada Dad built 21 wooden log buildings. Mother served as a midwife throughout the neighborhood and 24 children called her “Baba”. Dad kept bees as a young man in Ukraine and continued this hobby as long as he lived. In later years when health deteriorated, Mother helped him.

In the 1940’s the depression was over. Better times had arrived. The children were on their own. Fred and Nina were teaching. John, Pete and Harry were farming. Dad and Mother lived contentedly on the little farm. We had come a long way since June 4, 1929, and had accomplished a great deal. Dad’s dreams and ambitions were fulfilled in this land of freedom and opportunity. He enjoyed building for the future. Many of the buildings he made are still standing – the two-story house, the church, the granaries, the barns, the house on the little farm. Our forefathers developed our country and for a short time enjoyed a better life. Canada became their country. 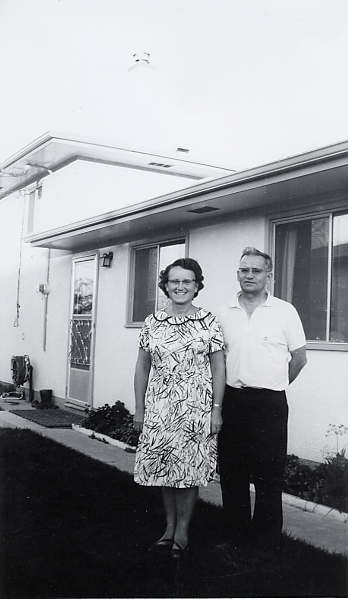 In 1966 Fred and Nina visited our two sisters living in Ukraine, as well as our nephews, nieces, uncles and aunts. We saw the house where we had lived, our orchard, the meadow where Fred and Pete herded cows, the river where the boys swam and fished, and the sandy bank where Nina played as a child. In 1985, Fred went back to Ukraine and in 1986 Nina and her two daughters, Kathy and Joan, travelled to Ukraine to meet many relatives. We often think what a brave man our Dad had been to set out on an unknown destiny at the age of 55 and accomplishing so much for his family and community. We are grateful for all he has done and are thankful that Ivan and Oksenia were our parents.