Carl Sefaniassen Norum was born on January 11, 1857 at Inderoy, Norway to Sefanias Norum and Ingeborg Anna Haldseth. From 1875 to 1879, he attended military school in Trondheim. The economy in Norway was very poor at that time and being the third son in his family, Carl had no chance of inheriting any land so in November of 1879 he immigrated to the United States where land for farming was inexpensive. Records show that he travelled on the steamship “Tasso” landing at Hamilton, Ontario. His passage cost Nkr 130 (about US$20 today). He eventually settled at St. Thomas, North Dakota. In 1885 he married Marie Carlson who had originally come from Goteborg, Sweden.

Carl was followed to North America by his brother Peter in 1882. Following his father’s death in 1885, his mother Ingeborg Anna and siblings Anton, Iver, Sivert, Anna and Arnt came to the Hallock area of Minnesota, Anton arriving in 1887, Arnt in 1890, and the others in 1888. 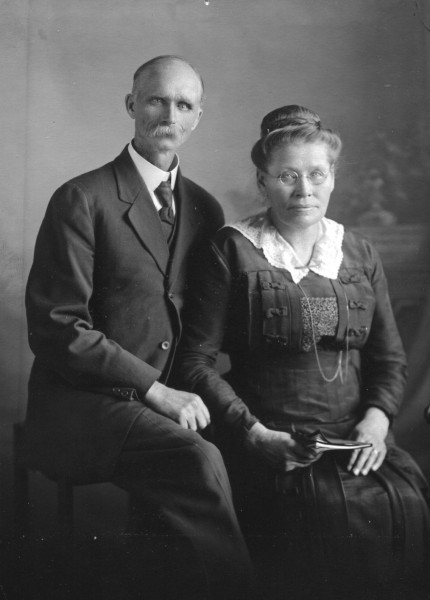 In 1892, Carl enrolled in the Augsburg Seminary, in Minneapolis, Minnesota. He graduated in 1897 and was ordained by the Hauge Synod of the Lutheran Evangelical Church. By this time he and Marie had seven children; however, two had died in infancy. Carl’s first call was to a parish at Hay Creek, Minnesota, where he stayed for two years. He then moved back to St. Thomas, where he stayed for five years. During this time, three more children were born.

In the very early 1900’s, many Norwegian people from Minnesota and North Dakota were moving north to what would, in 1905, become the province of Saskatchewan. Carl felt these settlers would need spiritual guidance. In addition, there was the lure of homestead land; so in December 1903 he filed for a homestead on a quarter-section of land (SE¼ 28-29-25 W2) that today is at the intersection of highways #2 and #15, approximately 150 kilometres northwest of Regina. In the spring of 1904, Carl, his brothers Sivert and Arnt, their families, and several other families moved north to Saskatchewan disembarking from the railway at the town of Davidson, which was some 50 kilometres from the homestead land.

During the summer of 1904, Carl built a two story house with a large living area on the ground floor and one large sleeping room upstairs. A lean-to was built on one end to serve as the kitchen and another lean-to on the side served as the barn. All the lumber, as well as any provisions, had to be hauled by horses from Davidson as it would be another six years before a railway from Regina would be built near the farm. Today (2004), this house still stands although it has been used as a granary for many years. In the fall of 1904, Carl returned to North Dakota and in the spring of 1905 he brought Marie and their seven children (Jesse, Mable, Oscar, Kalmer, Victor, Arnold, Casper) to their new home. 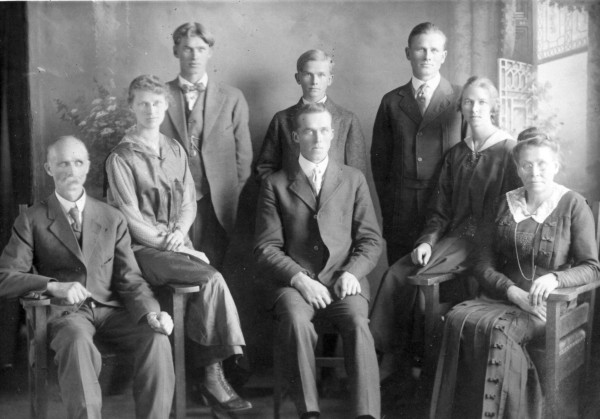 In 1906, Carl donated land for the building of the Nordal School (District #1410). The school was named after the district in Norway where Carl was born. The lumber for the school was hauled from Davidson. The school proved to be the centre of community activities. It was here where Carl held Sunday worship, where the children went to school, and where most social events took place. In 1910, the school was moved approximately 400 meters as it had been sitting on the right-of-way for the railroad that was now being built.

In 1907, a large barn was built on the farm. The lumber for this was ferried by barge up Last Mountain Lake to the north end and then hauled by horses approximately 25 kilometres to the farm. In 1908, a new house was built on the homestead. This was a large two-story house with four bedrooms upstairs. It even had clothes closets, an unheard of luxury at that time. One hundred years later, some of the original linoleum still covers the floor in one of the bedrooms and shows very little sign of wear. The water supply for the kitchen was a large cistern under the living room and a hand pump. A very modern feature of the house was electricity, generated by a gasoline driven powerplant with the energy being stored in wet batteries that were kept in a nearby shed. The total cost of the house was $800. Today (2004), the house is still used from time to time in the summer by Eldon Norum, grandson of Carl.

Very soon after arriving in 1905, Carl began to preach and to organize congregations in an area approximately 130 kilometres long and 50 kilometres wide with Last Mountain Lake in the centre (extending from the towns of Bulyea, Govan, Strasburg, Penzance in the south to Ridgeford (Venn), Mandel (Watrous), Viscount in the north). Carl did not receive any remuneration for his services, but occasionally a hat would be passed around to defray some of his expenses. His work with his congregations meant that farming duties were left to his sons. His oldest son, Oscar, at the age of 12, was responsible for all the farming operations. At one time, Carl owned 14 quarter-sections of land, a very very large farm at that time. As his children married, he gave each a parcel of land as a wedding present. 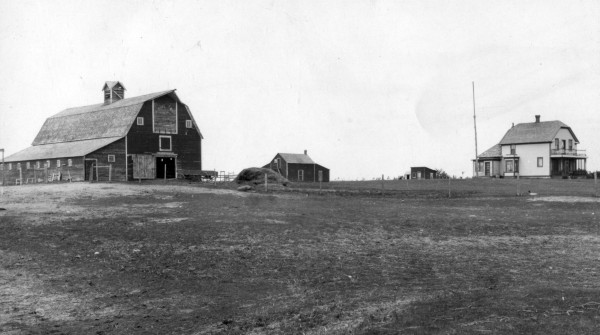 In 1906, Carl’s brother, Sivert, gave a parcel of land (on NE¼ 27-29-25) to the Lutheran Church for a cemetery. Although it belonged to the Lutheran Church, Carl was determined it should be the resting place for all. The first grave was that of a small child who died in 1908 from drinking fly poison. In 1910, Carl had to bury his 12 year old son, Victor, who had died from scarlet fever. Victor’s brother, Oscar, had made the 100-kilometre round trip by horse to Davidson to fetch the doctor, but it was to no avail. Over the years, Carl, Marie, many of their descendants, and many neighbors have had Nordal cemetery as their final resting place. Today, the cemetery is maintained by some of Carl’s descendants. It is a place of simple quiet beauty – MAY THEY REST IN PEACE.

One of Carl’s early endeavors was to organize his Govan parish to build a church. They decided in 1905 to build a sod building, but the canvass for funds was so successful that a wooden building was erected. Oscar Landstrom donated land and Robert Paul, a local carpenter, oversaw the work at a salary of about $0.50 an hour. All work was done by volunteers. The church was originally called the Union Settlers Church, but in later years it became St. Olaf’s Free Lutheran Church. It was the first church in the Last Mountain Valley and had the only cemetery for 50 kilometres. The church was destroyed by a cyclone in 1959, but the cemetery remains.

Carl was a member of the Evangelical Lutheran Church. It followed a tradition of personal conversion and a low form of worship. Carl ministered to all, be they Lutheran or not. He did not wear clerical robes or follow a strict religious law. In 1908, a schism arose in the Lutheran churches and the more strict Free Lutheran Church took over most of Carl’s parishes. By 1912, Carl was doing only a small amount of preaching.

Many are the stories that are told of Carl’s life as he ministered to his parishes. He was known far and wide for the team of wild ponies that he drove. The team would be hitched to the buggy or sleigh in the barn and Carl would jump in and take off. His sons would open the barn door and the ponies would run all the way to Bulyea, Penzance or Viscount. Dressed in a coonskin coat with a fur cap, dogskin mitts, felt boots and four-buckle overshoes, Carl was ready for all kinds of winter weather. This winter outfit was complemented by a buffalo-skin robe and a foot warmer that contained white hot coals. When Carl graduated to a Model T Ford, it was driven in a similar manner. The shortest route was a straight line and there weren’t many fences or roads to impede the journey. 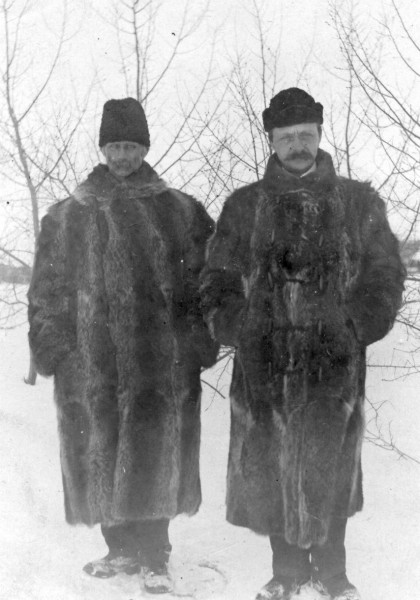 Another story tells of a couple coming to be married when Carl was 30 kilometres from home cutting wood with a neighbor. Carl didn’t have a prayer book or other church supplies with him. A prayer book was found in the farmer’s house so Carl, dressed in his overalls, performed the wedding rites. An impromptu supper was served and as it was now late; all just stayed at the farm and slept in one large room – a bit crowded, but where there is heart room there is always house room.

In the 1920’s, a huge tent was often pitched on the Norum lawn and people from all over North America would come and hold Lutheran conventions. At one of these meetings, it rained so heavily that even local people couldn’t go home. Women and small children were housed in the old house, men slept in the hay loft of the barn, and ministers and wives had the bedrooms in the new house. 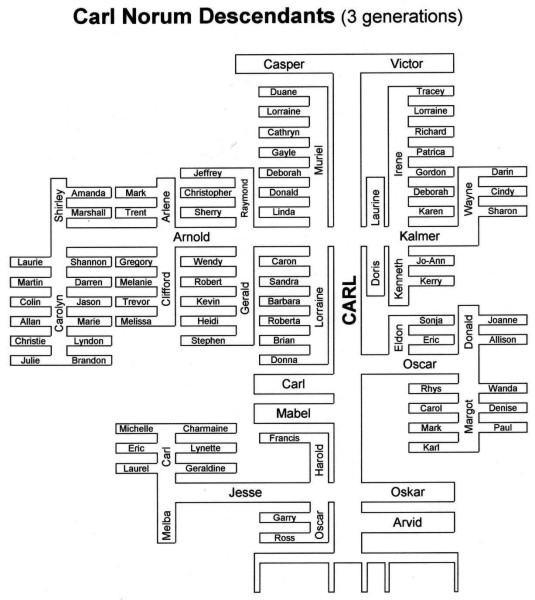 Carl died in 1929 and Marie in 1936. They are both buried in the Nordal Cemetery. Their tombstone reads “Well done, good and faithful servants” – indeed a fitting tribute to these early pioneers who served both God and man in good times and bad.