Robert Owen Ross and his wife Bertha Almira Lloyd came to the Beverly-Webb-Swift Current area of southern Saskatchewan from South Dakota in the spring of 1906 with his big “Case” tractor, plough and other farm machinery.

It may be of interest that Bertha Lloyd was an aunt of the former Saskatchewan Minister of Health and later Premier Woodrow Lloyd. Both, Bertha’s father William and his son, Albert, (Woodrow’s father) moved from South Dakota to the Antelope Lake area about 1910 to homestead. Albert’s family consisted of nine boys and they did in fact have their own ball team. No doubt there are many relatives of the two Lloyd families still living in Saskatchewan today. 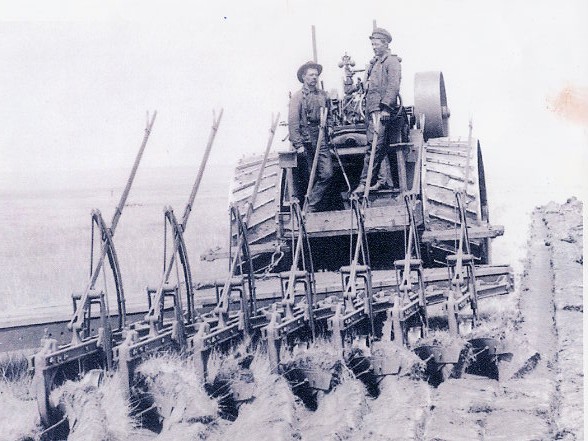 Robert was born on 18 Sept.1871 at Hadley, Mass. and Bertha was born 6 March 1879 at Eyota, Olmstead County, Minn. Both of their families moved to South Dakota and records show that Robert (who even then was in the threshing business) threshed for Bertha’s father, William Lloyd, with a horse powered threshing machine in 1898. I suppose that is when he met his bride-to-be since they were married 4 April 1899 at her parents’ home near Alto, Roberts County, South Dakota. Their three oldest daughters were born at Peever, Roberts County, South Dakota: Gladys Darlean, 16 Dec 1899, Ethel May, 19 Sept.1901 and Eva Laura, 11 Oct.1904 .

Eva died 23 July 1910 near Swift Current, Saskatchewan of a burst appendix; Doctors and medical treatment at Moose Jaw were just too far away. 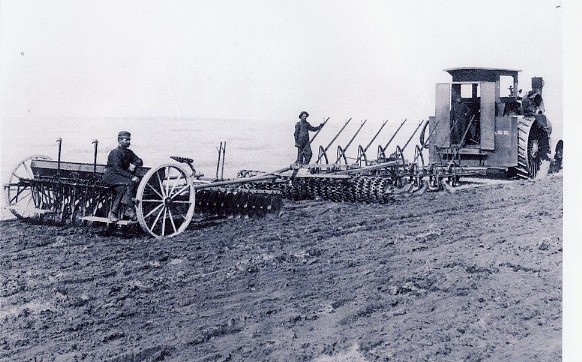 Preparing the Soil
Year: circa 1910
Tractor , plough, packer, disc and seed drill breaking virgin prairie, preparing the soil and seeding a cereal crop of either wheat, oats or barley, all in one operation. Robert Owen Ross seated on the seed drill. This would be in the early years 1906 – 1910.

Robert’s homestead was legally described as 36-15-15-3, located west of Swift Current, just north of Canadian National Railway tracks at “Java” junction. Here the family lived in a one room shack for the first winter. He later built a big barn and a nice house, up on a hill. There was a ravine near the house and here he dug a well. He put up a windmill and pumped water in a pipeline to the house. His brother Walter homesteaded on adjoining property and his father and mother, Robert Stewart and Susan Ross came to the area later and claimed a homestead on the south side of the Canadian National Railway tracks. Being innovative, Robert rigged up a phone on the barbed wire fence line to connect the three farms.

Meanwhile Robert was improving his own homestead and doing custom work for his neighbours and anyone who would hire his big tractor and plough to break the prairie sod. He did work in southern Saskatchewan and Alberta. He acquired more machinery and hooked up one implement to the other to make a train. There was the tractor, the plough, a packer, a disc and a seed drill, all in line, ploughing the virgin prairie, working up the soil and seeding it to a cereal crop of either wheat, oats or barley, all in a single operation. He followed the circuit in the fall with his big tractor and threshing machine to thresh the crops. There were about eighteen men on the crew which included two water wagons and one coal wagon to haul water and fuel for the steam engine. Also a “cook Car”, a building on wheels about 10 feet by 14 feet which followed the crew wherever it was located. The “cook Car” contained a large cook stove and a large table around which the men sat to eat their meals. His wife. Bertha and the older daughters, Gladys and Ethel served as the cooks. 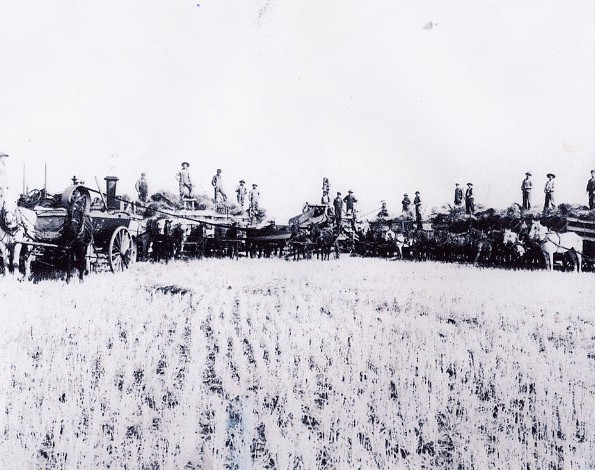 Threshing
Year: 1908
Place Name: Swift Current
Threshing in 1908 south east of Swift Current. Robert Owen Ross in the buggy in front of the threshing machine. Counting R. O. Ross, there were eighteen men in the crew. Note: Little colt with team second from the left.

Since there was no refrigeration, a cow was brought along and tethered nearby to provide a fresh supply of milk.

Three more girls were born in Saskatchewan, Violet, 17 Sept 1906 at Moose Jaw and Ruth 18 Aug 1912 and Dorothy Helen 13 Aug 1918 at Swift Current. The girls got their education in the rural schools of Saskatchewan and in Swift Current. Gladys attended business school and later was employment in the Telephone Office and Municipal Office in the town of Pennant, Sask. Ethel, Violet and Ruth attended “Normal School” (teachers training) and taught in various schools in Southern Saskatchewan. Helen followed domestic work and was married at 20 years of age. 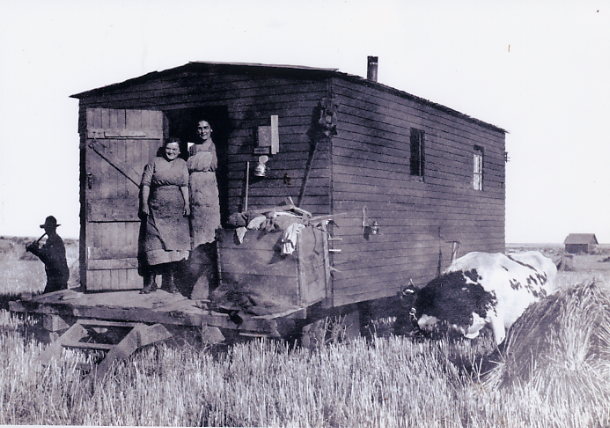 Cook car with fresh milk supply
Year: circa 1918
Cook car with fresh milk supply close by (no refrigeration). Oldest daughter, Gladys (Reid) with her mother Bertha Ross in the doorway. Bertha and Gladys cooked for the eighteen man crew in the “cook car”. This picture was taken about 1918. The “cook car” being on wheels, and the cow followed the threshing operation from farm to farm.

The drought of the thirties took its toll and Robert lost most of his machinery to the finance company. He ended up running a flour mill in Simmie, Saskatchewan and retired there. The Second World War broke out and Robert thought he should do something for the war effort. England didn’t want our wheat, but they wanted the finished product, flour. Most small prairie towns had a flour mill and to meet the need they were running 24 hours a day. In 1941 at the age of 70, Robert re- wrote his steam ticket and went to work on the midnight shift at Outlook, Saskatchewan running their steam powered flour mill. He continued there until the war ended in May 1945.

In the fall of 1945 Robert and Bertha bought twenty acres of treed land 4 1/2 miles north of Aldergrove, B.C. on Jackman Road. They lived here for twelve years, cleared the land and grew strawberries and raspberries. The trees on the property were huge, one tree was cut down, taken to the saw mill and produced enough lumber to build a medium sized house for his daughter and son-in-law. Stumping powder had to be used to get the roots out of the ground. 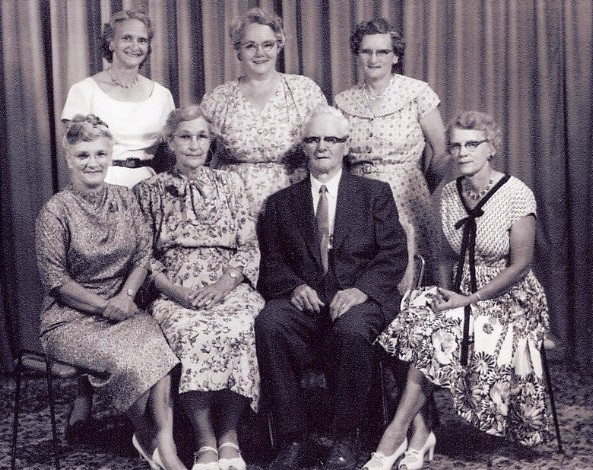