The hill called Carmel is located six km. north of Carmel, Saskatchewan, west of Humboldt. It was called spathanaw watchi in Cree, and it means “the mount of the far view”. It was first mentioned as Mount Carmel in a report of the Geological Survey of Canada for the year 1873‑74.

Carmel takes its name from the original Mt. Carmel in Palestine. There, a range of hills runs transversely across the lay of land and juts into the Mediterranean Sea. The present Israeli City of Haifa is located at the Cape. This mountain ridge is 21 km long and five to thirteen km wide. The Cape is a high promontory and its highest point is 600 metre above sea level. From Biblical times Mt. Carmel was considered a holy site. It was there that the prophet Elijah triumphed over the 400 prophets of Baal. The Mount is famous for its natural beauty. It became the site of the Carmelite monastery, the home of the Carmelite Order. “Before they entered the European scene, the Carmelites were a group of hermits living on Mt. Carmel in Palestine. They believed themselves to be the spiritual sons of Elias the Prophet, and the life they led on Mt. Carmel was patterned on his life of contemplation. . . . they were known for their devotion to God’s Mother. Eventually the Order spread to Europe and parts of England where they were known as the “White Fathers” Members of this Order wear the Brown Scapular, a tradition which goes back to 1251. It was then that St. Simon Stock, their leader was visited by Our Lady who gave him the original scapular. The practice of wearing a miniature copy of the Brown Scapular has spread throughout the world in the belief that Mary would bless, protect and help those who wore it. The Saskatchewan Carmel hill was originally part of a homestead. The farmer relinquished title to the hill in 1921, so that it could be used as a place on which to erect a shrine to Our Lady of Mount Carmel. 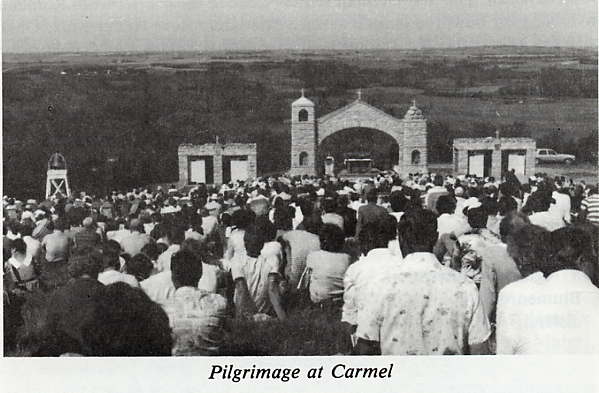 The shrine and its surrounding territory became part of the Abbacy of Muenster. The Benedictine Order of Priests and Brothers ministered to the needs of the German-American pioneers who settled there at the turn of the century. This territory became known as St. Peter’s Colony. The first Abbot was Rev. Bruno Doerfler, OSB, who wanted to dedicate the hill to Mary. His successor, Abbot Michael Ott, OSB, was given this privilege in 1922 in a public ceremony during which time about 3500 people dedicated themselves to her care. 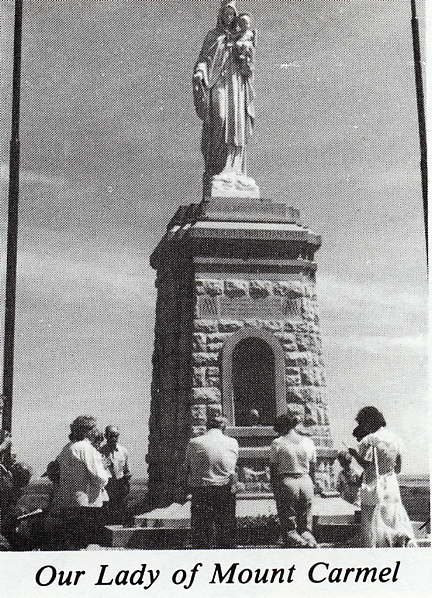 Our Lady became the patroness of St. Peter’s Colony, and the Abbot announced that the Sunday following the feast of Our Lady of Mount Carmel on July 16 would become the annual pilgrimage day. Originally, an altar was erected on the summit followed by a temporary chapel which was later moved to the slope on one side. An Italian-made white marble statue of Mary, over 2.5 metre high, was placed on a foundation of native stone on top of the hill. The statue was blessed by the third Abbot, Rev. Severin Gertkin, OSB, on July 22, 1928. The western slope of the hill was levelled and a chapel of native stone was erected there, designed and built by Antonio Molaro of Saskatoon, who also built the statue base and the Our Lady of Mount Carmel Stations of the Cross. The chapel and altar were blessed on July 1, 1938, while the Stations were blessed on July 16, 1939. The first pilgrimage took place on July 22, 1923 with about five or six thousand people in attendance. The largest number of pilgrims to attend was 12,000 who came on September 26, 1948 for the launching of the Family Rosary Crusade for Saskatchewan. It was part of Father Patrick Peyton’s rosary campaign.