Cochin: Our Lady of Lourdes Shrine built in 1955

This grotto is located within the village of Cochin on No 4. Highway. It was presumed to have been erected under the direction of Fr. Pascal after he had seen a similar one in St. Albert. The statues of Mary and Bernadette were sent from France and were paid for by anonymous donor. It is thought that the stone-work was done by J. Lunghamer, a stonemason from North Battleford. The Natives from Moosomin Reserve hauled in the stones. The grotto has since been enlarged and the stone pillars placed in front in the late Fifties. At the request of Fr. G. Lavoie, Joseph Lunghamer donated his time and expertise for the enlargement. The date of the consecration of the shrine is unknown, but the statues were blessed in October, 1955 by Fr. Lassonde. 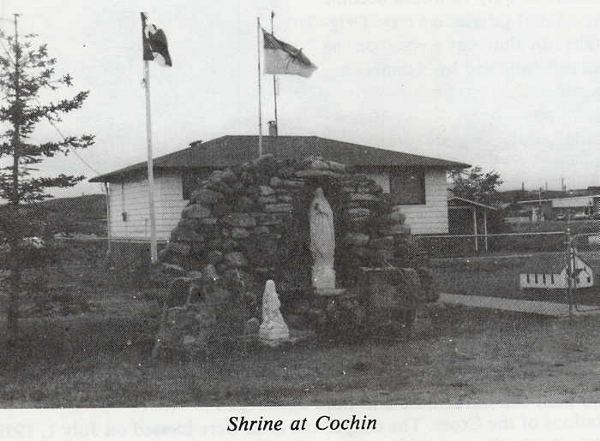 “Our Lady of the Prairies Foundation”, Saskatoon, Saskatchewan.