At the Cole Bay Mission the local people, mostly of Native origin, built themselves a shrine dedicated to the Mother of God. The grotto is situated on a natural slope in front of the church overlooking Canoe Lake. It was constructed of rocks collected from the lake. The cross at the top of the shrine is made of cement. The one metre high Madonna statue is unable to survive the harsh climate and is covered during the winter season. A shelter roof for the shrine was constructed out of logs and plywood. The local inhabitants take great pride in maintaining both the church grounds and the grotto. Alex Desjarlais, Victor Couillonneur and Daniel McCallum were instrumental in erecting the shrine which was blessed by Archbishop Paul Dumouchel, OMI, on October 11,1981. Each fall near October 11, an outdoor Mass is held at the shrine. In June, the pilgrimage consists of a two-day event. On Saturday morning, the people are given the opportunity of receiving the Sacrament of Reconciliation. The Archbishop concelebrates the Eucharistic Celebration. This is followed by the Blessing of the Sick. The hymns are sung in Cree accompanied by guitar and organ. Some of the pilgrims also present their individual testimonies. On Sunday, the attendance increases at the Divine Liturgy, the Benediction and the Way of the Cross. The social aspect of the pilgrimage is very significant. Since the Natives come from various areas of the northland, there is much inter-visitation among all ages. Some tepees are still used for overnight camping. A canteen is set up, and religious articles are sold. The weekend concludes with a bingo at the hall. Throughout the year the inhabitants frequently pray at the grotto. At Christmas time they decorate Mary’s shrine with colored lights. 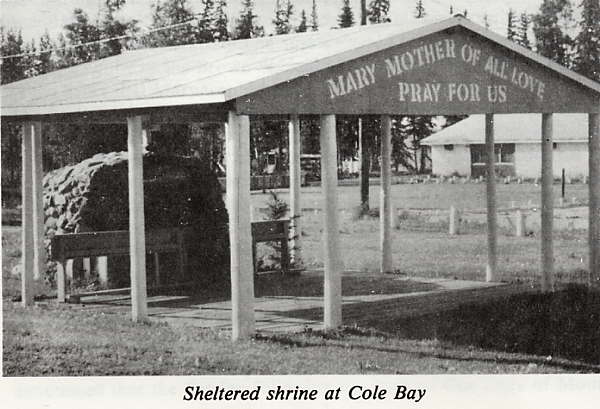 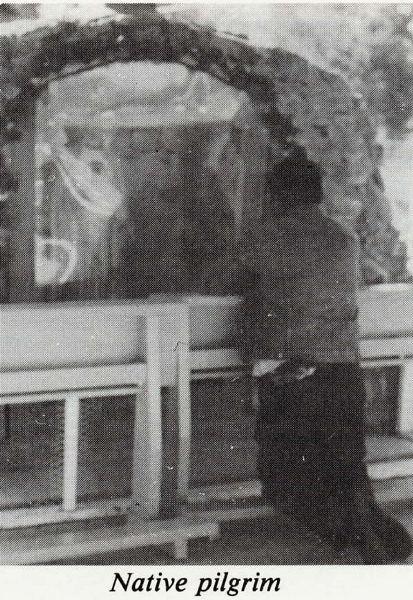