Some of the surviving pioneers of the district relate that a wandering light kept appearing on a high hill just west of the village of Cudworth in 1908-09. During the summer of 1909 a light appeared to three small children as they were tending cattle near the hill. To the little boy, the light embodied a vision of a barefooted, beautiful young bride, dressed in white, with a bright gold cross attached to the end of a chain. When the lad tried to pick up the cross that was trailing on the ground, the vision disappeared. Several other people witnessed the bright light as well. The little boy died the following year from wounds inflicted by a wild cat, while the two little girls grew up and married.

According to other reports, the young woman appeared a total of five times, once with an infant in her arm.

Although they did not see the actual vision several witnesses saw unexplained phenomena, namely, grass rapidly moving at the site on a calm day; an aura or glow of light surrounding the hill at the time of the vision and after it had ended. One of the witnesses was instrumental in setting up the first wooden altar and also a wooden cross on the summit of the hill. He has since passed away. 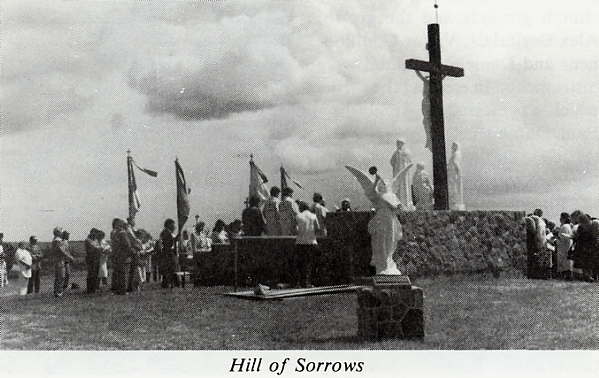 The place where the young woman allegedly appeared was staked off, a makeshift altar set up and a holy picture of the Blessed Virgin Mary placed on it. A sum of thirty-five dollars was voluntarily given by donors towards erecting some sort of permanent markings but was later turned over to a local parish.

Located on N.E. corner of Section 35, Township 40, Range 27, west of Second Meridian, the hill originally was bald on the top and the south side and wooded on the north.

Interest in the hill died down until 1937, a dry and grasshopper-infested Depression year. Then one farmer, an eyewitness to the 1909 hill-glow, had a dream in which an old man instructed him to place an old cross at the site of the vision. The cross was lying behind the belfry of the church. If he did so then it would rain. The dream did not give the farmer much rest until he carried out the request. This was towards six o’clock in the evening. Within a few hours rain clouds appeared and it rained from 9.30 pm until midnight.

The next development took place in the late 1940’s when Rev. Cyril Lotocky was pastor of the district. He became interested in the hill and in the pilgrims who frequented there each summer. During his time a wooden chapel was constructed on the west side of the hill. The pastor also requested the Bishop for permission to erect a memorial at the site. Permission was granted to hold a Tridiem mission fifty days after Pentecost and to build a chapel and stations of the cross as well. The time of the vision(s) coincided with the tenth week after Easter, a period extending from June to early July. 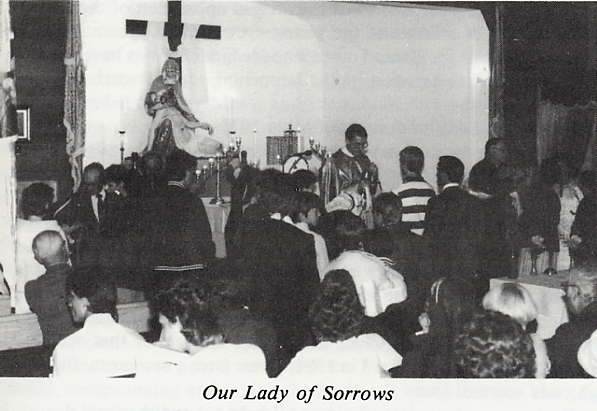 Assistant pastor Rev. Jerome Lashkewich continued the expansion of the shrine of his predecessor. Having a great love of gardening, the new parish priest beautified the site with trees and shrubs. He also supervised the improvement of the road circling the hill and also the construction of the new stations of the cross. A well was dug on top of the hill and he chapel was enlarged by moving and attaching St. Demetrius church to it. The property was enlarged and fenced off, grass seeded and picnic facilities set up.

Today, the summit bears a large wooden cross with an image of Christ. At the foot of the cross are statues of Mother Mary, St. John and Mary Magdalene. In four directions, about eight metres from the marble altar are statues of angels with trumpets.

In 1978, pastor Lubomyr Ramach suggested a shelter-roof be installed to protect the crowds during inclement weather.

This second-oldest Marian shrine in Saskatchewan, built by Ukrainian pioneers and their descendants, annually draws pilgrims from Friday to Sunday of the tenth week following Easter Sunday. Up to one thousand pilgrims attend each year. May the Hora Sostradalna (hill of sorrow) continue to attract Mary’s people from across the Prairies and beyond.

The epilogue to this fascinating legend of Cudworth hill concerns the little boy who claimed seeing the bride-like vision. As his body was being transported to the cemetery, the people in the funeral procession observed a cloud following them. It was, otherwise, a bright day, with not the slightest indication of a rainstorm. He was born in 1902 and died at mid-summer of 1910.

Not much more is known of the alleged apparition of the unknown young maiden. A relative of the young eyewitness is presently engaged in researching this incident. To our knowledge there has never been any official church investigation of the happening at Cudworth.