An event from the past adds special meaning to the pilgrimage site for the local people. As in Cudworth, a light was seen at night at the future shrine site by a person. The light, however, was shining over the lake in line with the site, which was about two km from Dillon. The land there was cleared for the grotto in 1970. 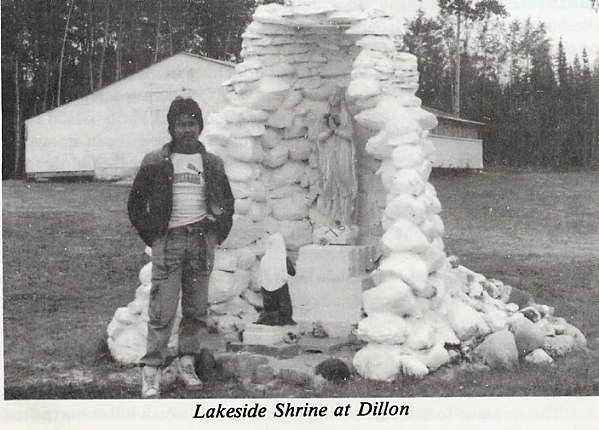 The first Divine Liturgy at the proposed site was celebrated in 1971 on a portable altar. Eventually, a small grotto was built in 1982, along with a people-shelter. The statues of Mary and of St. Bernadette were obtained from the Guy School of Clearwater Lake after that school was closed. The grotto was blessed in 1982; a year later a new cross, five metres high, was erected.

Each year a three day pilgrimage is held around the feast day of the Assumption. The pilgrimage includes the Sacrament of Reconciliation, a Eucharistic Celebration, Benediction, singing, and the Stations of the Cross. The Natives here are Chipewyan.