The political situation in France at the time was in a turmoil even though the village of Corps where the boy and girl lived was situated in the diocese of Grenoble in the serenic beauty of the French Alps. Everywhere, new ideas were circulating; religion was under attack, fewer people attended Sunday Mass, and the sacraments were neglected.

The apparition took place on the afternoon of Saturday, September 19, 1846. Mary appeared to the youths in a ravine, as a large circle of brilliant light outshining the sun. The circle opened, showing the figure of a woman. She was seated and she was weeping.

The lady’s face was very sorrowful but also very beautiful. The lady wore “a headdress topped by a translucent crown; the dress strewn with bursts of light; the slippers edged with roses; the golden crucifix hanging from a chain about her neck, a hammer on one side of it, a pair of pincers on the other. And all was suffused with glory.” 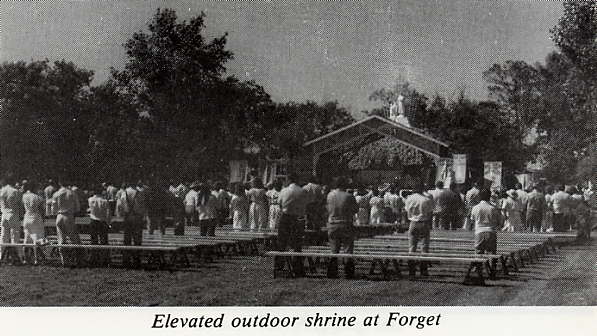 Mary came to warn people and to plead, to call humanity back to Jesus, to induce it to prayer and penance. People must stop working on Sunday, cease cursing and taking the Saviour’s name in vain. Mary thus became a “reconciler of sinners”.

When a piece of rock on which Our Lady sat was broken off by a pilgrim, a spring of water emerged which proved to have miraculous qualities.

The message given at La Salette was reiterated at Lourdes and again at Fatima. It was warning of God’s displeasure with man’s disobedience and a call to his repentence.

The La Salette Fathers came to Forget, Saskatchewan parish in 1899, and in the first church they placed a statue of Our Lady of La Salette. Pilgrimages were held from 1922 to 1929.

During the depression years they lapsed because few people could afford to come a long distance for the pilgrimage. However, under the direction of Father H. Poirier, an impressive, elevated out-door shrine on the spacious grounds was built, largely out of fieldstone. E.J. McCudden, Architect, designed the shrine.

“Since 1954 annual pilgrimages to this shrine were revived at the explicit request of His Grace, Archbishop O’Neill. The numbers attending, the deep devotion of the pilgrims, the inspiring ceremonies and sermons — all combine to give the annual event an atmosphere of deep and practical religious Faith.”