The parish of St. John-Baptiste is an historic mission dating back to1846. The grotto to Mary was built a century later in 1944.

It is situated on a sandy point not far from the church. It all began when the Sisters of Charity (Grey Nuns) who operated the local hospital and taught school, encouraged the involvement of the entire village in the construction of the shrine by asking every person to bring a rock. Rev. Remy, OMI, Brother Boisvert, OMI, and about five men from the village did the actual construction. Evergreens were planted nearby, which today enhance the beauty of the flowing lines of the grotto. The shrine has two statues of the Virgin. Recessed in the Immaculate Conception grotto where the altar used to be are statues of Our Lady of Lourdes and Bernadette; a large statue of St. Anne with a young Mary stands on an elevated part of the grotto. 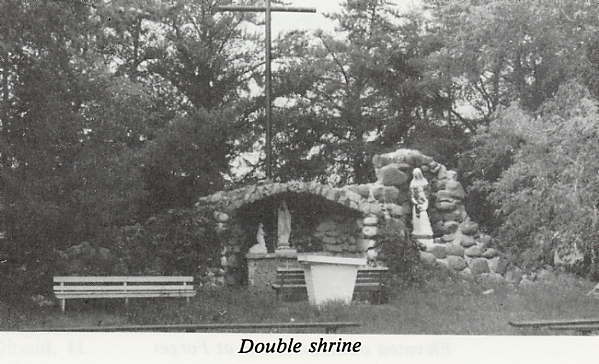 Pilgrimages were traditionally held on the feast days of Corpus Christi and Assumption. Each July for many years the shrine would become a rendezvous for people of the vast areas of the north. Prior to their journey to Lac Ste. Anne, northwest of Edmonton, there would be three days of prayers as they started gathering at Isle a la Crosse. It used to be that the people traveled in a caravan of covered wagons and camped along the way in their tepees. By the mid-seventies they traveled together in school buses, singing on the journey and still stopping to camp. At night a bus was used as a confessional.

The pilgrims at Lac Ste. Anne included Natives from Alberta, Saskatchewan, as well as, from the United States. One of the older traditions involved the blessing of the water of the lake. The Natives would dress in special garments and bathe in the lake, dry and roll up these clothes, never to wear them again. At home during illness, these clothes were used to cover the sick person.

Eventually, the tradition of gathering at Isle a la Crosse for the trip to Alberta died out. Some still went in their own vehicles, but others went to newer shrines at Dillon, Cole Bay and at Patuanak which has a pilgrimage in memory of Rev. Louis Morand, an Oblate missionary who died in 1965.

After a lapse of several years the parish council of St. Jean-Baptiste organized a pilgrimage at Isle a la Crosse on June 23, 1984. The Saturday evening events included confessions, prayers, singing and Mass in the crowded church, concelebrated by the pastor Fr. Norbert Engel, OMI and visiting priests of Patuanak and Beauval, Fathers Gene Warnke, OMI and Sylvain Lavoie, OMI. The music was conducted in Cree and English and accompanied by organ and guitar. The Host was offered in each of the four directions in native tradition. 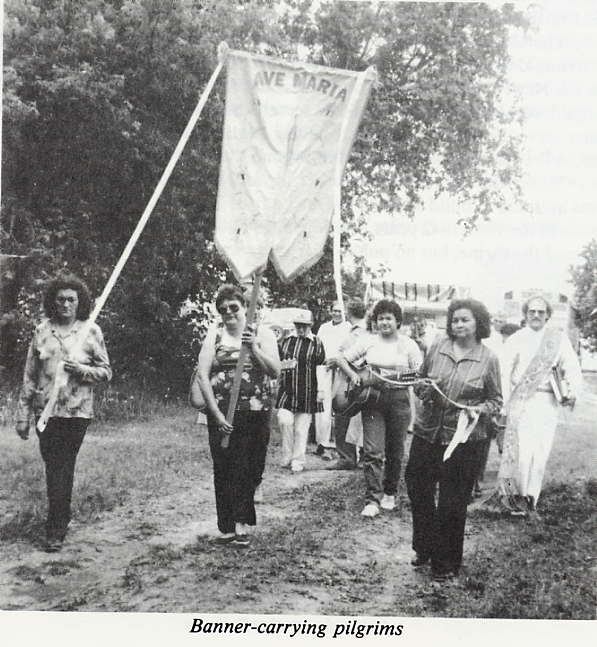 On Sunday morning all the pilgrims walked in the procession near the brightly colored flags which were strung out along the lake between the shrine and the church. After the Eucharist sung in Cree and English, the pilgrims returned for the service of healing and the final blessing.

Mary’s children here consist of Cree, Chipewyan and Metis. All ages come from Beauval, Canoe Narrows, La Loche, Patuanak, Turner Lake and they mix with those of Isle a la Crosse. All come to honor Our Lady and ask for her prayers and divine graces for themselves and their families. It is planned to continue holding a pilgrimage each year in June.