About five km. south of the town of Esterhazy stands an old stone church. The local people call it the Kaposvar church. It formed the nucleus parish of the Hungarian, Czecho-Slovak and Ukrainian pioneers who settled in that area in 1886 and in later years.

The Magyar settlers brought with them from the Plains of Hungary a strong devotion to Our Lady which they transmitted to their children in the New World. Within four years, the St. Istvan school district was organized and Franz Holtshacker served the community as teacher. He later served the parish as a priest, having anglicized his name to Woodcutter, a literal translation from the orginal German tongue. 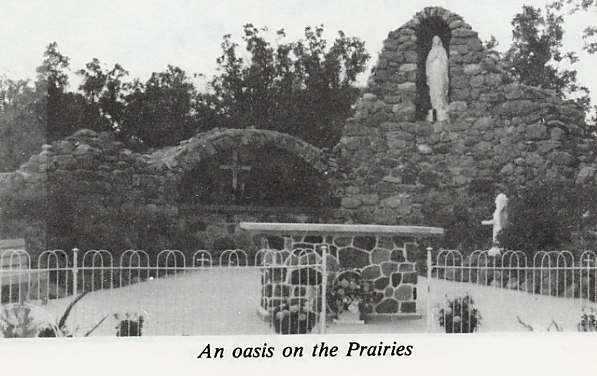 An oasis on the Prairies
Place Name: Esterhazy, SK

Under the guidance of another pastor, Rev. E. Horvath, a project was initiated to build a shrine to Our Lady of Lourdes. Construction took place in the 1941-1942 years. On July 8, 1942, Archbishop P. J. Monahan, blessed the shrine, but no public pilgrimage was held until the Marian Year of 1954.

About 2,500 pilgrims attended that first gathering. As a result of public demand, the pilgrimages have continued to this very day.