This shrine is located about twenty-five kilometres E. S. E. of Regina, and approximately five kilometres north of the village of Kronau. It is a rural shrine, situated in a “village” of farm houses on the banks of Many Bones Creek.

The original inhabitants of St. Peter’s parish immigrated from the Black Sea coast, but spoke German; others came from the northern United States. Rev. H. Metzger was their pastor who chose a site for the grotto and organized the first procession. In 1925, a statue of the Blessed Virgin was carried to the site and placed on a stand, while the people sang hymns, recited the rosary and sang the Magnificat.

About five thousand people were present for the blessing of the completed grotto on August 15, 1917, by Archbishop 0. E. Mathiew, of Regina.

According to the Saskatchewan Genealogical Society Bulletin dated Fall, 1974, excavation for the grotto began in June of 1917 and “a load of stones was brought from every quarter of land belonging to the community”. Fifty subscribers gave a total of $1089.00 cash to build the grotto — a very huge sum of money in those days! With the donated monies, the raw materials were purchased and a professional stonemason hired. The statue of the Virgin Mary, cast in bronze, was obtained from the Daprato firm in Chicago. The statue of Bernadette, made of cement, was obtained from the sculptor Carii in Montreal and donated to the parish by Paul Fahlmann. 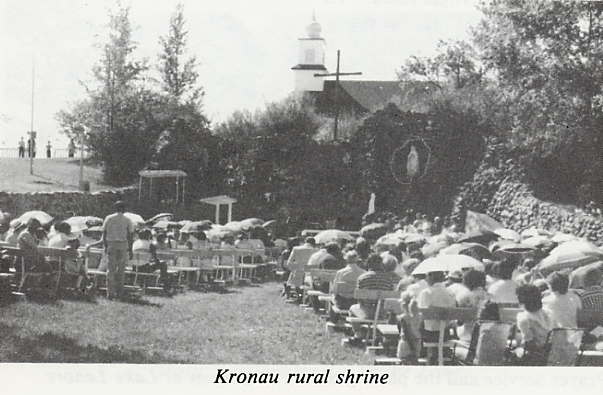 It seems that these German settlers, building a strange platform of masonry made of fieldstone aroused the curiosity of a mysterious visitor who came to inquire of the pastor if perchance the structure was meant to be some sort of cannon site, with hidden tunnels leading to equally hidden gunpowder rooms. World War I was then in progress, and the police as well as the military were very edgy. The Canadian spy never returned!