Ponteix: Our Lady of Sorrows Shrine 1934

The parish church of Notre Dame d’Auvergne in Ponteix contains the four hundred year old oak statue of the Sorrowing Mother and her Divine Son, after His body was taken down from the cross.

Originally covered with gold leaf, the statue was hidden in a straw pile by peasants during the French Revolution. Eventually the statue became the possession of Canon Teytard d’Aubiere of Auvergne in France. It was give to Rev. Albert Royer who passed it on to Mr. Shoefer who was leaving to settle at Ponteix. Through an error of the shipping company, the statue returned to France from North America and then was sent back to be finally placed above the main altar of the first church in Ponteix in 1909. 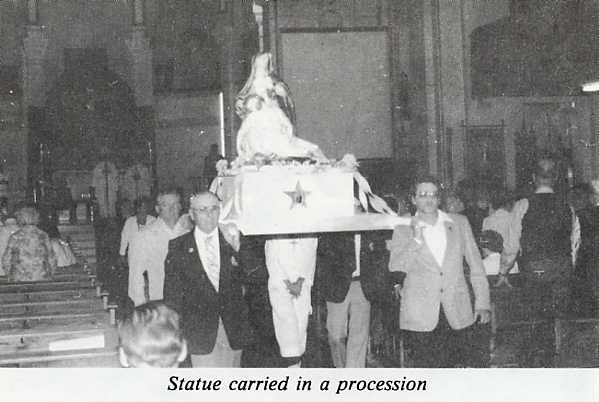 Two boys saved the statue from a fire that completely destroyed the second church in 1922. They carried it through a church basement window.

The 1930 brick church presently holds the statue but public pilgrimages did not begin until 1934. Bishop A. Melanson of Gravelbourg asked his flock to make a pilgrimage to ask Our Lady for her special help during the drought years of the Depression. Several thousand pilgrims responded by visiting her shrine on July 16, 1936 in Ponteix.

The shrine continues to be one of the two places of pilgrimage for the Diocese of Gravelbourg, and is credited with at least one miracle.

“Our Lady of the Prairies Foundation”, Saskatoon, Saskatchewan.