St. Anthony’s parish is the site of the shrine to Mary in Rama. Although the church was built in 1922, the outdoor shrine was not begun until the eve of World War II. It was under the influence of Rev. Anthony Sylla, a Polish-born Oblate that the shrine was originated, both in thought and in construction. The Polish and Ukrainian people of Rama and of Dobrowody districts gathered fieldstone after part of a hill was removed.

Stones were brought by the wagonload from the surrounding district to serve as the building material. On September 1, 1939, the erection of the grotto began, and the main part was completed that year. In the following year, the large front wall and the two side wings, in the form of a half circle, were completed. 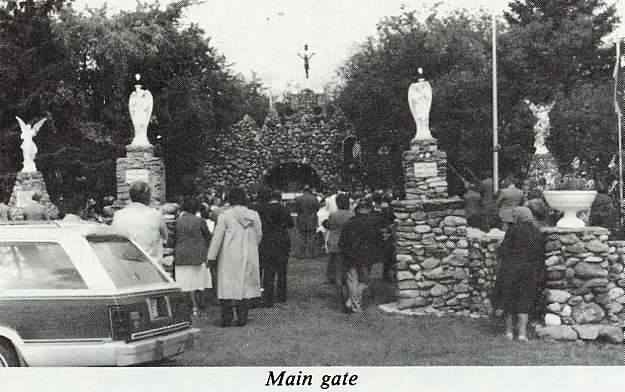 Msgr. A. J. Janssen, the Vicar General of the Archdiocese of Regina, blessed the shrine on June 15, 1941. On August 14 and 15 of the same year the first public pilgrimage took place; these two dates continue to draw pilgrims here up to this day.

In 1944, more work was done on the shrine. A cross was erected above the niche containing the statue of Our Lady. At the foot of the cross were placed the statues of the Blessed Virgin and of St. John. There are also statues of Our Lord: one of Him being taken down from the cross; another of Jesus in the sepulchre; and a third, of Our Redeemer’s Resurrection.

Ten years later, a statue of Our Lady of Grace was given to Father Sylla by the local Knights of Columbus. This statue is now situated as a pond ornament near the gates. 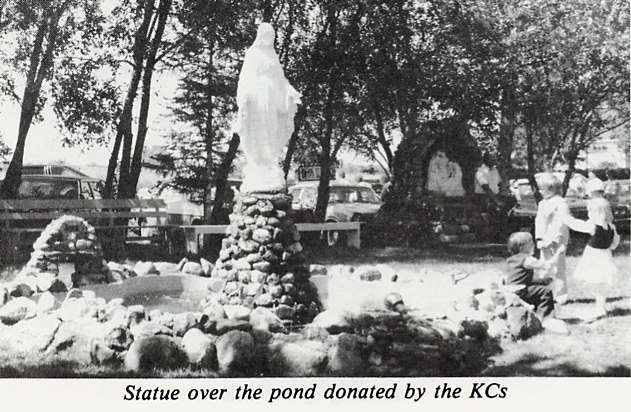 In 1958 and 1959, the Stations of the Cross were erected by Father Sylla after his Golden Jubilee ordination celebration.

The pilgrimage begins each year on the evening of the 14 of August with a Divine Liturgy. There are Confessions heard before and during this time. With darkness comes a candlelight procession around the grotto. The event becomes quite spectacular as candles are mounted everywhere by the pilgrims. Literally thousands of candles are stuck on the calvary stone, on statues, in niches, on any space possible, illuminating the grotto and the area around it with a sea of flickering lights. This is followed by the Exposition of the Blessed Sacrament throughout the night.