In the centre of St. Joseph’s Colony stands an attractive and historic landmark that is visible for miles around, namely Our Lady of the Rosary Church. Like other parishes in St. Joseph’s Colony, the beginnings of Holy Rosary parish were hard and very difficult. A small church that was built in 1911 under the leadership of Father Schultz, O.M.I., soon proved to be too small. In early 1918 families in the parish numbered approximately 70, and since most were blessed with children it was no wonder that a new church was required. By spring $5,000.00 was collected for the building fund; blueprints were completed, a parishioner donated ten acres of land for the site, and construction of the present 40’ x 80’ European Gothic design church began in earnest. Under the guidance of pioneer missionary, Father Bieler, O.M.I., help and sacrifices of German-Russian pioneers, able leadership of the carpenter, Joe Schroefell from Edmonton, work progressed rapidly. 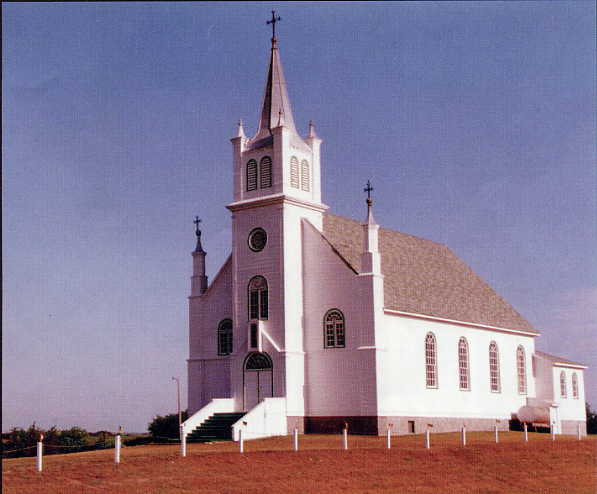 Our Lady of the Rosary Church
Year: c. 1985
Place Name: St. Joseph’s Colony
Photograph of church presumably taken after 1975 – 1978 restoration and before 1999 addition of wheelchair ramp

In the early summer Father Paul Kulway, O.M.I., representative of the Bishop, blessed the cornerstone. This feast was favoured with beautiful weather; people came from near and far and donated an additional $1,000.00 to the building fund. On September 8, on the Feast of the Birth of Our Blessed Mother Mary, the interior of the church had been finished and before the year-end the first Mass was celebrated. By now $8,000.00 of the total cost of $12,000.00 had already been paid.

During the Lenten Season of 1919 beautiful Stations of the Cross were purchased and displayed on the walls. At Easter a Communion rail of oak was installed and shortly thereafter a parishioner donated a magnificent pulpit of regalaco imitation marble at a cost of $400.00. In 1920 the famed artist Berthold von Imhoff decorated the interior of the church with fifteen large size paintings depicting the Mysteries of the Rosary for a total cost of $4,000.00. As a final touch a beautiful sounding bell was installed which to this day is the envy of neighbouring parishes.

In 1922 the parish was very saddened to hear of Father Bieler’s obedience to another parish. However, he was ably replaced by Father Goetz, O.M.I. Although his tenure in the parish was of short duration (1922-1926) he was instrumental in the building of the parish rectory. Father Karl Groetschel, O.M.I., succeeded Father Goetz in 1926. He chose to serve the parish for thirty-two years until his retirement in 1958. It was during his stay that the Fathers in St. Joseph’s Colony decided to hold an annual pilgrimage in honor of the Blessed Virgin Mary, to be held on July 16. Being centrally located in the colony, Holy Rosary Church was chosen as the site with the first pilgrimage taking place in 1932 with 3,000 pilgrims attending.

By 1918 standards. Holy Rosary Church was considered to be large building and, thus, became one of the most outstanding country churches and parishes in St. Joseph’s Colony, thanks to the painstaking efforts of two missionaries and the endless generosity of the early parishioners.

In 1963 a new church was built in the Village of Reward, to replace it for services. However, the older church is still used by parishes in St. Joseph’s Colony for the annual pilgrimage center, for weddings and anniversary celebrations. 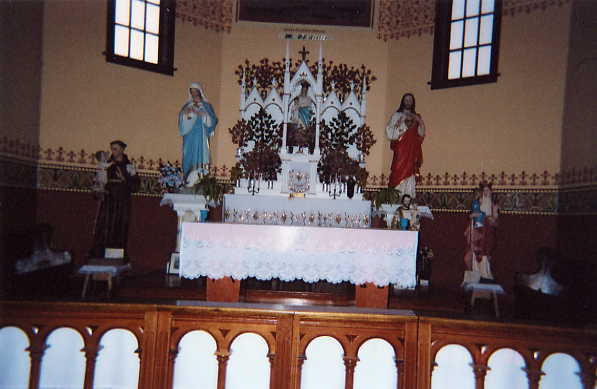 Because of its age, weathering and deterioration of the church did take place. On April 20th 1975, a meeting with eleven parishes representing St. Joseph’s Colony was held. At this meeting a decision was reached to immediately begin a program of renovation and restoration of the Holy Rosary Church, in three stages, all to be completed in three years. A committee of seven men was elected to spearhead the project. Thanks to many sacrifices and endless hours of labor from parishioners, along with most appreciated financial assistance from both the federal and provincial governments, the project was completed as scheduled.

The committee and parishioners felt honored for having been blessed in their efforts to restore the Holy Rosary Church to its origina1 splendor.

Also in 1975 the Holy Rosary Church on the pilgrimage site was declared a historical site. The first Shrine was a humble beginning – a canopy of cloth shaded the altar and was adorned by a picture of Our Lady. In 1936 a wooden structure was built, and served as the “Grotto” until the present shrine was built in the summer of 1966. 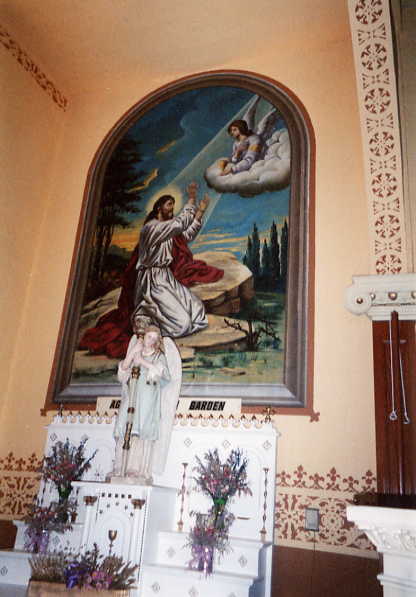 In 1999 a “Roof Repair Fund” was started and the response was overwhelming. The asphalt shingles were replaced with cedar shingles in 2000. In 2001 the exterior of the church was repaired and painted, also the front and back steps were rebuilt identical to the original. At this time a wheelchair ramp was built onto the front steps making the inside of the church accessible to everyone.

This pilgrimage is now held on either July 16th, or, if the 16th does not fall on a Sunday, it is held on the Sunday before the 16th of July.

The year 2002 marked the seventieth year of celebrating pilgrimage. We thank God for seventy years of pilgrimage and for this small, beautiful little space on His planet where we are able to come together after all these years and worship God and dedicate this day to His Blessed Mother. This special devotion provided our people with the encouragement to go on in very hard times and also to give thanks for their many blessings. For these and many reasons this pilgrimage will go on, on a day set aside to honor Our Blessed Mother. 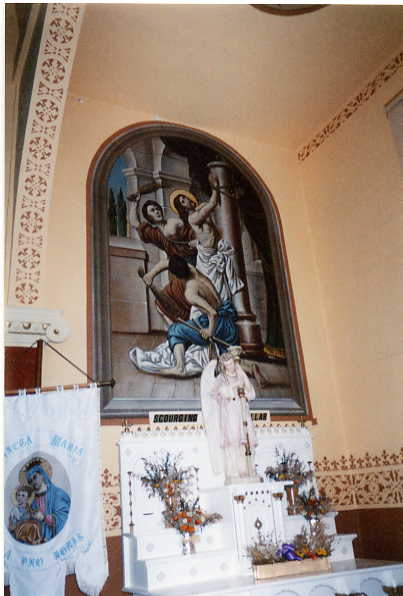 The Holy Rosary Church and site is open to the public every summer from May 15th to September 15th from 9:00 a.m. to 9:00 p.m. The beautiful well-kept grounds are also available for family gatherings upon request throughout the season. For visits to the site outside of the summer schedule contact caretakers-Tim and Mary Wagner. Phone 306-372-4783.

The existing committee would like to acknowledge and thank the Our Lady of the Prairies Foundation and also the Leier family for making this website possible.