The Our Lady of Good Counsel Grotto is located on the grounds of Queen’s House of Retreats. Queen’s House is truly a Queen’s house in that it has at least four large statues of the Virgin Mary. At the entrance to the chapel is a large sculptured wood statue of Mary, carved in Quebec. It previously stood in the entrance of the chapel of St. Thomas College in North Battleford. Near the main entrance to Queen’s House is a one metre high plaster statue of Mary, Queen of the Universe. On the Retreat Centre’s grounds near the river are two other statues, one white statue of Our Lady of the Prairies. She is situated on a rock in the middle of a large pond. The other is Our Lady of Good Counsel mounted on the wall of the outdoor shrine.

At the third national convention of the Catholic Women’s League of Canada held in Halifax on June 14-19, 1923, Our Lady of Good Counsel was chosen as the League’s patroness. 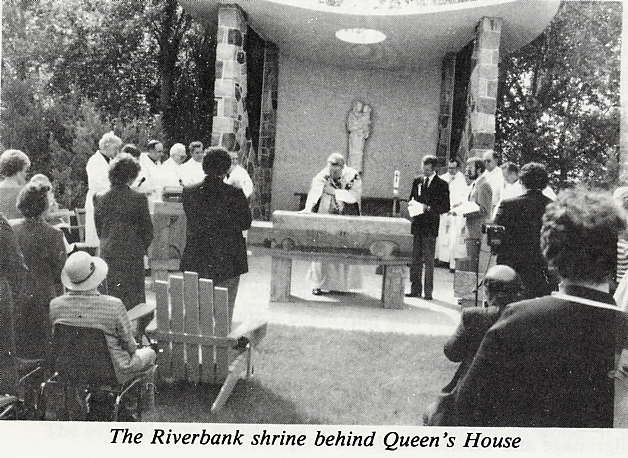 The original statue of Our Lady of Good Counsel was vandalized in the Seventies and a new statue was ordered from Montreal. The damaged Madonna was repaired many years later and placed in a rock garden of the Holy Rosary shrine at Reward, Saskatchewan in 1984.

The original picture of Our Lady of Good Counsel, fresco, was unveiled on April 26, 1467, upon completion of restoration of an old church dedicated to Our Lady of Good Counsel. It was painted on light plaster and is believed to have come from the walls of a church in Scutari, Albania; it measures 45 cm by 38 cm. In a style somewhat Byzantine, it appears painted in a less stylized rigidity than in other paintings of the East. The infant is truly childlike and is depicted very close to His Mother, thus encouraging us to draw equally close to her for advice and counsel.

The icon of Madonna and Child has withstood the ravages of time and remains an object of veneration and a source of miracle for many. The shrine of this Marian painting is in the village of Gennazzano, Italy, about 48 km from Rome. The artist is believed to be Antonio Vivanini who belonged to the Verona school of art of the early fifteen century.

“Our Lady of the Prairies Foundation”, Saskatoon, Saskatchewan. Website: www.ourladyfoundation.org