Originally there was a small shrine erected just west of the rectory, a pedestal of Our Lady and a building block for Bernadette. This set of statues was a gift of thanks to the parish by a widowed mother for her son’s ordination. The date was September 29, 1958 and the ordination day of Father Lucien Larre, O.M.I. Father Anton Herter, O.M.I., directed the construction of the original tiny shrine and the planting of spruce trees around it.

With the arrival of Father James Hermann, O.M.I., and after much hard work, the location of Mary’s shrine was moved to the southwest corner of the church property. Dead wood and scrub brush were removed, exposing the fruit trees and apples and plums planted by Father Hubert Hermes, the parish founder. A small bridge was built across the drainage ditch and a fire pit dug. 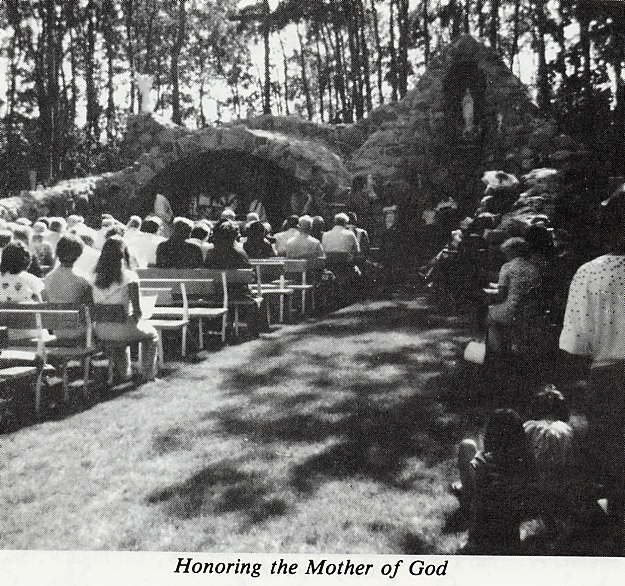 Taking advantage of a natural mound of ground in the vicinity, it was here that the Lourdes grotto was constructed as a “Homecoming 80” project for Saskatchewan’s 75th anniversary. Construction began on June 15 with the removal of trees from the site. Heavy duty machinery was used to move earth and for digging. Prior to this, other shrine sites were visited and photographed. Blueprints were drawn to scale in order to make their own unique shrine.

Rain hampered much of the construction plans causing construction to drag on all that summer. The Our Lady of the Assumption Parish saw the completion of phase one on their feast day.

During the following weeks, rocks were delivered at the site, and in the fall paths for the future Stations of the Cross were laid out in a circle around the grotto. “A Shrine is incomplete without Stations of the Cross. Some years back a new set of Stations had been obtained for the church. They were plaster cast and replaced the wood-framed Oleographs surmounted by Greek crosses. Stored in the rectory attic and gathering dust, one wondered at times how to dispose of them. Here now was the answer: the shrine. And so it was.” 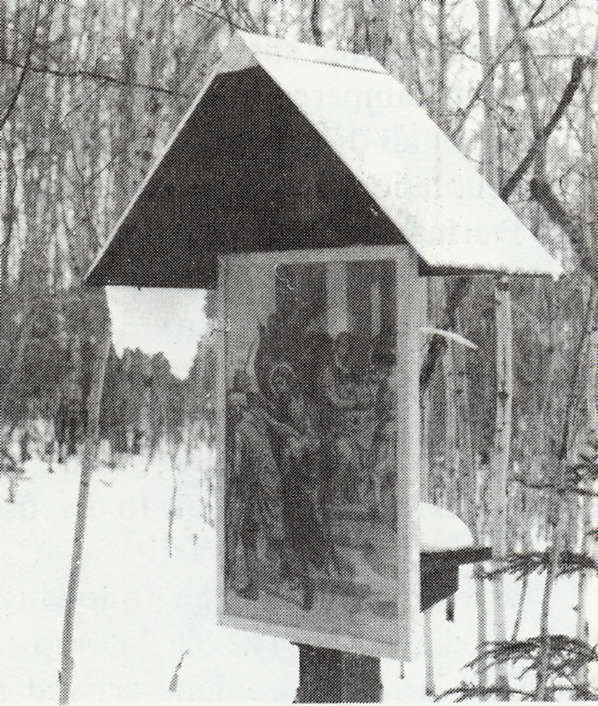 Work continued the following spring and well into the summer hampered by rains. The big day was August 16, 1981, when Bishop Laurent Morin and Msgr. Leblanc arrived from Prince Albert and blessed the shrine, the huge cross and the stations.