This Marian shrine is located inside St. Mary’s Church in Yorkton. It consists of a very large icon of Our Lady of Perpetual Help situated behind the main altar. The icon was painted by Ihor Suhacev of Toronto and installed in 1964. It is framed in an ornamentation of the leaves and fruit of the grapevine. Immediately surrounding the icon on all sides are huge radiating rays, painted in gold to represent paradise.

The original icon, which was smaller, was painted on wood. It is a certified copy of an icon blessed by Pope Benedict XV in 1916. 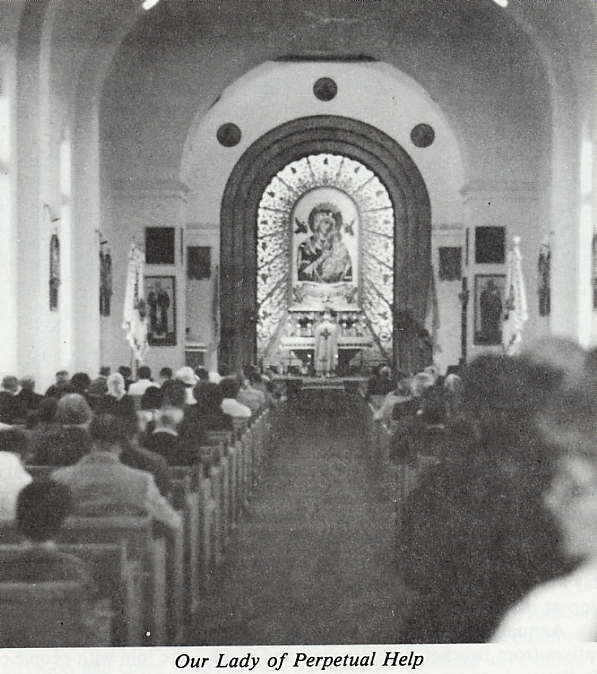 The picture in the icon shows us a frightened boy, Jesus, being held in His Mother’s arms. He is frightened by the vision of two angels showing Him the instruments of His future suffering. In his haste, Jesus nearly loses His sandals, one of which is dangling by its strap from His foot. Just as he placed himself entirely in His Mother’s hands for protection, so now in heaven. Our Lord has given her all graces, to distribute to those of her children on earth who ask her.

Among other symbolisms found in this icon are two stars on her veil, the larger of which is the Star of the Sea. This star symbolizes Mary leading us to the safe port of heaven. The background is golden, signifying heaven, and is reflected on her clothing. 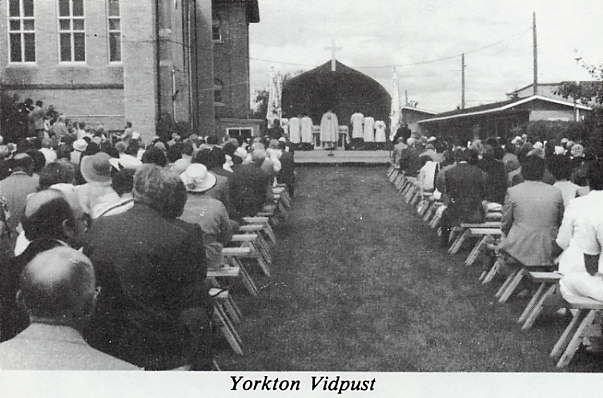 The golden crown was placed on the original picture by order of the Holy See in 1867 as a token of many miracles brought about by Our Lady under the title of Our Mother of Perpetual Help.

Pope Pius IX entrusted the miraculous icon to the Redemptorist Order instructing its members to make Mary known to the entire world under the title of Mother of Perpetual Help.

The shrine in St. Mary’s church is the most popular among the Ukrainians in the province, drawing thousands of pilgrims annually each June. Because of the large number of pilgrims, the Redemptorist Fathers have set up a type of quonset hut on the lawn just north of the church in which to hold the Divine Liturgy. The hut contains a banner with image of Our Mother of Perpetual Help, and an altar. The pilgrimage begins of Friday evening and ends Sunday afternoon with a blessing of water to be used by the pilgrims for physical and spiritual healing.

St. Mary’s Church validly claims many “firsts” among all the parish churches in the Eparchy. Although not the oldest church building in the province, it was the first to be built entirely of brick. It became the head-quarters of the Ukrainian branch of the Redemptorist Order. This Eastern Rite branch of the Redemptorist family was initiated and developed by Father Achilles Delaere, a Belgian-born priest. In 1906 Father Delaere adopted the Byzantine Rite, learning the Ukrainian language so as to better serve the Ukrainian settlers that had arrived in the Yorkton- Saltcoats area as early as 1897. 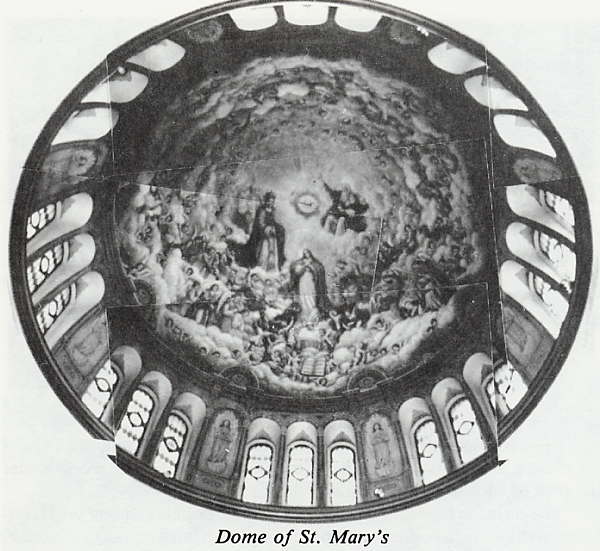 St. Mary’s Church was built in 1914 and became a pilgrimage site in 1915. Its pilgrimage day is called vidpust or “the day of indulgences,” since a special indulgence is granted to those pilgrims who fulfill the usual requirements.

Perhaps the most astonishing feature of this basilica-shaped, byzantine-styled edifice is the magnificent and breathtaking painting on its interior dome which rises 18 metre (55 feet) from the floor. The parish commissioned Stephen Meush to depict a heavenly scene of Mary’s coronation by her Divine Son. The work was carried out between 1939 and 1941. The artist purposely distorted the figures of Mary, the Holy trinity and the 157 angels in order to compensate for the curvature of the ceiling.

The painting was done in the oil base fresco technique, while the other paintings in the church were done with oil on canvas and then attached to the walls. Rev. Metzger painted the four evangelists beneath the dome.