THE VANDERLOOS FAMILY – A STORY OF DUTCH IMMIGRANTS

John and Jo were born in Holland. Their three children: George, Bill and Marlene were also born in Holland. The family immigrated to Canada in August of 1953. It was a hard decision to leave family and friends in their home country and travel to a far-off land with a mere $50 and a crate of family belongings, but John and Jo felt Canada was the best place for opportunities for their family. It was a long boat ride – 8 days – and John remembers that the whole family was sick. They “fed the fish” all the way across the ocean. The ship landed in Montreal. The family took the train from Montreal to Saskatoon. It was a long train ride. The family could not speak any English and had difficulty ordering food on the train. They ordered French fries as these were the only English words they knew.

The family was met in Saskatoon by a farmer who had sponsored them to come to work. He drove them to the farm near Marysburg where they lived in a house in the same farmyard as the farmer. John was the hired man. It was a dairy farm and required many long hours of work each day.

It was a very difficult time for an immigrant family who could not speak English and did not understand the Canadian ways. One night after supper Jo realized there was no bread so she decided to walk to Marysburg, about three miles away, to the store to buy some bread. Every time a car or truck came down the road she would hide in the ditch because she didn’t understand or speak English and had no way of communicating her intentions. She finally made it to town only to discover that the store was closed. So she had to walk all the way back without any bread, again slipping into the ditch when she noticed approaching headlights.

Another way of life that was hard to understand was the rural party line telephone system. Jo could not understand when the phone rang why people would lift the receiver to listen, but never said anything.

For the children, it was quite an experience to attend a Canadian school. On the first day of school George and Bill wore their shorts which was normal clothing for children in Holland, but not for the Canadian children of the early fifties. The boys soon wore jeans like the other children! During the first day at school, Marlene was sent outside at recess. She did not understand what she was supposed to do and thought it was time to go home! The language really did pose a problem at the beginning, but was soon overcome by the whole family.

In the spring of 1954, the family moved to Saskatoon where John was employed as a gardener. The family did not have much money, but remembers having good times with many other Dutch families who lived in Saskatoon. Many enjoyable hours were spent playing cards and listening to music played by John and other members of the Harmonica Club. Jo worked as a housekeeper and was taught English by the four year old daughter of one of her employers. Many happy times were spent by John and some of his friends on fishing trips to the northern lakes in Saskatchewan.

The family moved to North Battleford in 1959. John was the head gardener at the Saskatchewan Hospital. Jo did babysitting and worked in the Canteen. Jo spent many hours knitting and crocheting and was well known for her Dutch pastries. John was a member of The Battlefords’ Racing Pigeon Club and was well known in Western Canada for his racing and show pigeons. He was also a well-known pigeon and rabbit judge as well as a judge at garden shows.

George, Bill and Marlene completed post-secondary education and have made their homes in Saskatchewan. George and Brenda (Marr) live in Meota. They had two children: Shannon, deceased 2004, and Todd who married Janine VanderPol. Todd and Janine have two sons, Jorn and Kai, and live in Calgary. Bill and Joan live near Saskatoon (see Vanderloos, Bill). Marlene married Glen Hart and they farm near Cupar. They have four children: Greg (Saskatoon), Kristen (Cupar), Mark (Winnipeg) and Charmaine (Carlyle). They also have five grandchildren: Shelby, Owen, Joshua, Tenaisha and Alyx.

Bill Vanderloos was born in Holland and immigrated with his family to Canada in 1953. He lived with his parents in Marysburg and Saskatoon. In 1959 his family moved to North Battleford where his father was employed at the Saskatchewan Hospital. His met his wife, Joan Wooltorton (see Wooltorton, Eric and Anne history) in North Battleford where she was teaching high school.

Bill and Joan were married in 1969. They resided in Moose Jaw for two years where Bill attended the Saskatchewan Technical Institute and took Drafting Technology. Joan taught in the Secretarial Science Department at the Saskatchewan Technical Institute. In 1972 they moved to Regina where Bill was employed as a draftsman. Joan continued teaching in Moose Jaw and commuted daily from Regina.

In 1975 they moved to Saskatoon and purchased LSD 16 NE 32-36-3-3 in the Bainesville School District from Eric Wooltorton, Joan’s Dad. They lived in a mobile home while their house was constructed. In 1976 they moved into their new home. In 1977 they planted over 1000 trees as a windbreak. It was a very dry spring and the trees required constant watering which was a full time job. 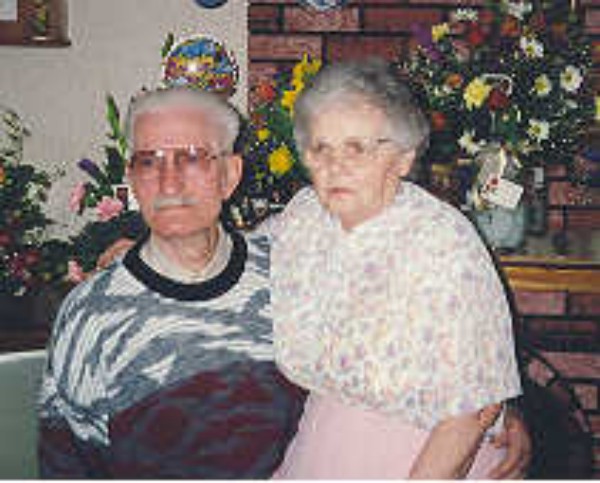 Bill is employed as a draftsman by the Potash Corporation of Saskatchewan. He enjoys hockey, curling and soccer. He was a member of the Clavet School Board for a number of years. Joan has taught school for a number of years and has also worked as a secretary. They have three children: John, Karen and Tim. All three children attended Clavet Composite School. John and Karen now reside in Saskatoon and Tim lives in Calgary.

Mr. Wooltorton’s father was a hay and livestock dealer in England. This trait of dealing was carried on by his son, Charlie. Charlie ran a mixed farm and did a lot of dealing with livestock. He enjoyed trading and bartering. He farmed all his life with horses and never owned a tractor. His first car was a 1929 Plymouth. Charlie never learned to drive. His wife, Lou, drove him around to make his livestock deals. Mr. Wooltorton was a director of the Patience Lake Telephone Company. 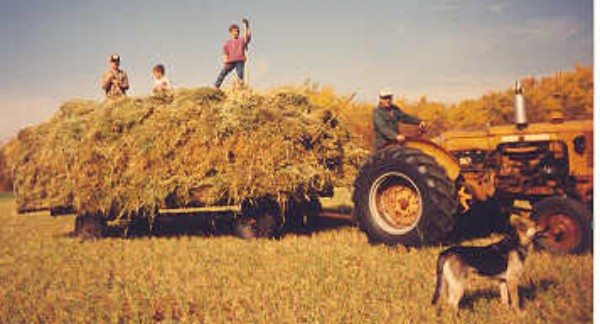 Mrs. Wooltorton (Lou) was born in Essex County near London, England. She was the daughter of James and Minnie Liegh. While on the farm near Saskatoon, Mrs. Wooltorton belonged to the “Let’s Be Friendly Circle” and was a member of the Red Cross. Because of her health, she was often confined to the house. The large bell on top of the house was used to call the men for meals and in later years to call them to the phone.

In 1945, Eric returned home to help farm. About 1948, Mr. and Mrs. Wooltorton started spending their winters away from the farm. A number of winters were spent in Saskatoon.

Eric Wooltorton was born in Saskatoon in 1912. He attended schools in Smithville, Swanson and Girvin, Sask. In 1928 he moved, with his parents, to the Bulmer farm nine miles east of Sutherland in the Bainesville School District.

Eric spent from 1931-1937 as a guide at Barkerville and from 1937-1940 he trapped furs in the Yukon. In 1941 Eric joined the air force. He married Anne Sunderland (see the Sunderland Beaton Families history) in 1941 and they were stationed at St. Thomas, Ontario and later at Lethbridge, Alberta.

In 1945 they moved back to the Bulmer farm. They had a mixed farming operation. In 1951 Eric and Anne began dairy farming. They shipped milk until 1966 when they returned to mixed farming. 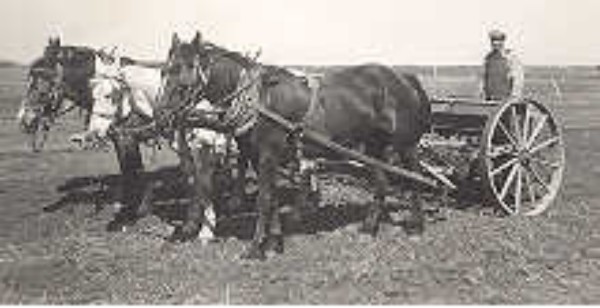 Eric was a member of the local board of trustees of the Bainesville School District for several years. He also served as assistant leader of the Patience Lake 4-H Dairy Club (later known as the Aberdeen Multiple Club) and was on the board of directors of the Patience Lake Telephone Company. He has always been interested in sports. He played ball and hockey and curled when he was younger and now enjoys watching all sports on television. He also has a great love for animals. He had many cats in his dairy barn and always had a dog with him. Eric enjoyed the wildlife and was known to feed the deer in the winter.

Anne has been involved with many community activities. She is a charter member of the Patience Lake Women’s Institute. She also contributed to the operation of Christ Church Patience Lake when it was open and is now a member of the board of directors. Many times Anne drove the Bainesville school children to field days, ball games and music festivals in the truck. The children all rode in the back of the truck and had a great time while Anne tried to keep her mind on the driving. Anne enjoyed knitting and crafts and has helped put many quilts together.

Anne and Eric both enjoy playing cards and have spent many hours with friends and neighbours enjoying this pass time. 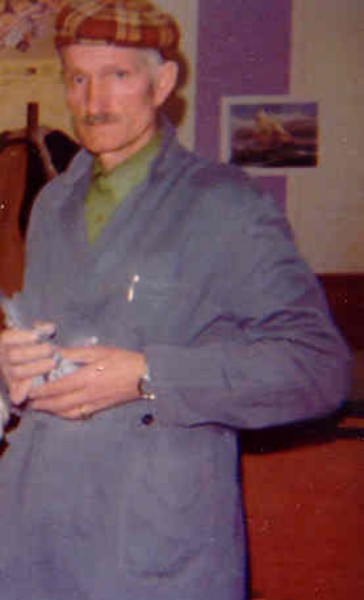 Eric and Anne had three children. Bryan, Joan and Betty Anne attended the one room Bainesville School. There was only one student in some of the grades and all students listened in on the lessons of the other grades. They walked to school or rode their bikes. Sometimes they would get a ride on the stoneboat in the winter. Joan occasionally rode a horse as there was a barn on the school grounds where it could be stabled. At times, they would get a ride home in the back of a truck with the neighbour. They recall many happy times playing anti-I-over, hockey on the rink, softball and soccer. Softball was the main activity in the spring. All the students of different ages had to play or there wouldn’t be enough to make two teams. The students would travel to neighbouring schools on Friday afternoons for ball games and, of course, there were also ball games at the track meets and local picnics. Hockey, on a rink which took many hours to make, was the activity for all of the students in the winter. One year there was such a blizzard that a huge snow bank covered the rink. Many hours were spent that winter playing on the snow bank and digging tunnels in it. 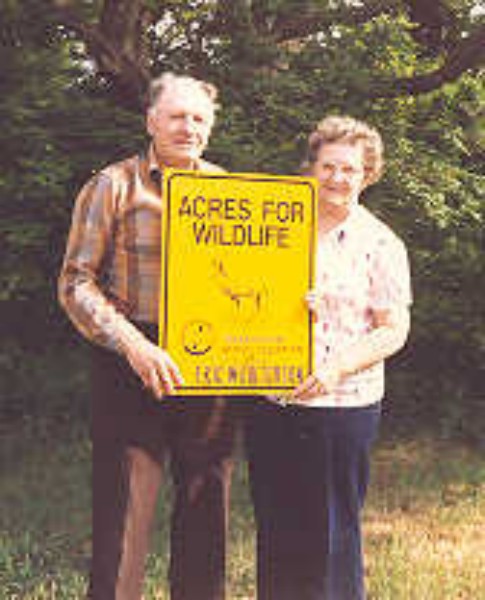